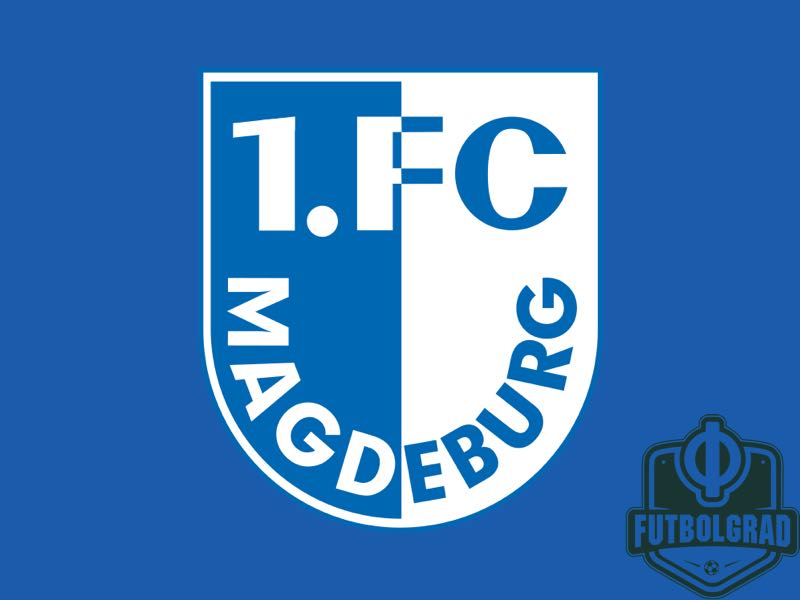 For Magdeburg, the draw against Borussia Dortmund is a victory in the lottery. The MDCC-Arena is expected to be sold out on Tuesday for the big DFB Pokal second round match against Borussia Dortmund. Located in the former GDR 1.FC Magdeburg is one of the most traditional clubs of the now defunct German Democratic Republic. Now in Liga 3 Magdeburg had its most successful period in the 1960s and 1970s winning three DDR-Oberliga titles, seven FDGB-Pokal titles and the UEFA Cup Winners’ Cup in 1973/74.

1.FC Magdeburg, in fact, were once one of the biggest teams in the German Democratic Republic and when the Berlin Wall collapsed, and Germany unified there was high hopes that Magdeburg could become a force in unified Germany as well. In 1990 the club would finish the Oberliga season in third place, which brought hope that Magdeburg could qualify for the Bundesliga or Bundesliga 2 in what would be the final Oberliga season in 1990/91.

Instead, management mistakes and the departure of several key players, as well as manager Joachim Streich, meant that Magdeburg had a miserable season in 1990/91 in what was the final season of the DDR-Oberliga, in which the club finished tenth. The result meant that Magdeburg would be delegated to the newly created NOFV-Oberliga, the third division in the league pyramid of a now unified Germany.

As a result, Magdeburg became one of the many clubs that struggled with the transition from communism to capitalism, and the club has never been in the third division in the league pyramid of unified Germany. The club even spent several years in the fourth division and only returned to Liga 3 in 2015 where the club narrowly missed out on promotion to Bundesliga 2 last season.

1.FC Magdeburg – There are Signs of a Renaissance

There are signs, however, that Magdeburg could undergo a significant renaissance in the coming years. Currently, in second place in Liga 3 Magdeburg are among the favourites for promotion this season and will be a formidable opponent to Borussia Dortmund Tuesday night under the floodlights of the MDCC-Arena.

Built at the location of the old Ernst-Grube-Stadion the MDCC-Arena is one of the many new modern football stadiums that sprung up in and around the time of Germany hosting the World Cup in 2006. With a capacity of 25,910 the MDCC-Arena is far more comfortable than the old Ernst-Grube-Stadion, but at the same time the stadium looks a lot like many other facilities built at the time and lacks a bit of character.

Perhaps it is only thanks to the club’s fiery supporters that Magdeburg was able to carry over any of the history and charm of the club that once won the UEFA Cup Winners’ Cup. In fact, the look of the stadium can be somewhat deceiving Magdeburg are among the lower division sides that are undergoing a bit of a renaissance. 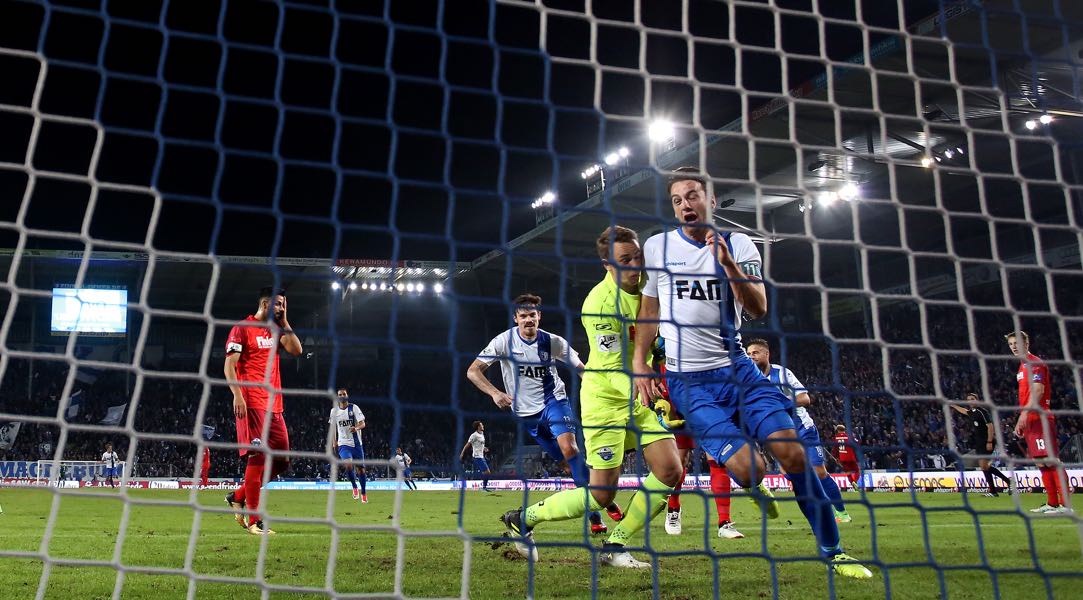 Magdeburg has had plenty of success this season and could be promoted to Bundesliga 2. (Photo by Ronny Hartmann/Bongarts/Getty Images)

German’s state television ARD recently ran a documentary of traditional teams that had to take the difficult path to the fourth division of German football focusing mostly on 1860 München and Rot-Weiß Essen. The filmmakers, however, also visited Magdeburg to show that it is not only possible to get out of the fourth division, but even that a so-called traditional team can not only survive in Liga 3 but also prosper.

Magdeburg is among the favourites to achieve promotion to the Bundesliga 2 for the first time since reunification. It would be another big step towards rebuilding the glory years of the club that was the only East German club ever to lift an international trophy.

When Dortmund fans arrive at the MDCC-Arena in Magdeburg on Tuesday to face the Liga 3 side they might be blinded by the dull façade of the facility. But it is worth to take a second look and explore the ground. Not far from the stadium one can find the Heinz-Krügel memorial.

Krügel and the Triumph in the UEFA Cup Winners’ Cup

Krügel coached Magdeburg from 1966 to 1976 and won three Oberliga titles and three cups with the club. But most importantly he guided Magdeburg to the Cup Winners’ Cup in 1974. Eliminating NAC Breda, Banik Ostrava, Beroe Stara Zagora, and Sporting Lisbon Magdeburg reached the final against AC Milan coached by the legendary Giovanni Trapattoni.

Milan’s squad included world stars like Gianni Rivera and Karl-Heinz Schnellinger. Magdeburg in the meantime used a squad that was built entirely with local talent. The most prominent players were Wolfgang Seguin, Martin Hoffmann, Manfred Zapf, Jürgen Pommerenke, Jürgen Sparwasser, scorer of East Germany’s game-winning goal against West Germany at the 1974 World Cup, and Ulrich Schulze. Magdeburg, alongside Celtic, are one of only two teams to win a European title with an entire squad of local players.

Perhaps the only downside to the victory in the Cup Winners’ Cup was the minus record of only 4644 spectators. Only a handful of GDR party dignitaries, some of whom, according to Alan McDougall author of The People’s Game, did not even know who 1.FC Magdeburg were. On top of that the GDR leadership was sure that Magdeburg would be losing this match and therefore were reluctant to televise the game on national television and it was not until the day of the final that the broadcast was secured.

Politics were always in the background of East German football and head coach Heinz Krügel was banned from coaching in football in 1977, because the government claimed that he had pro-West German tendencies. In reality, he refused to use information collected by the Stasi on Magdeburg’s 1974/75 European Cup opponent Bayern München, who were bugged ahead of the two teams playing each other in the round of 16, and in general refused to let politics dictate his sides selection ahead of crucial matches.

Wit Krügel banned, and several key players retiring from football Magdeburg won one last title, the 1983 cup, before the fall of the GDR. In some ways, Magdeburg alongside all the other teams in the GDR was a victim of Dynamo Berlin’s dominance, and it was not until the late 1980s that Magdeburg was able to put together a competitive side. In 1990 the club narrowly missed out on winning the GDR championship. Unfortunately for the club the national success, and the fall of the Berlin Wall meant that many key players would leave the club to play in the Bundesliga.

What followed was the drop to the third division in the unified German football league pyramid. Furthermore, the club, like many teams, struggled with the transition from communism to capitalism. Joachim Streich, the top scorer of the GDR and a club legend as a player and a coach, told kicker magazine on October 23 that a significant factor in the club’s decline was the fact that there was no consistency following the reunification.

Streich explained: “In the past, there was a lot of dreaming, but today the club works hard. President Peter Fechner, CEO Mario Kallnik and Jens Härtel as the coach have brought consistency to Magdeburg—before there was always a coming and going, it was impossible for anything to grow. All three work together, and nobody wants to be the star. Kallnik has finally got control over the finances. Härtel is developing a team that reflex his ideas of football.”

The coming and going of functionaries and coaches is a familiar story of East German football after the fall of communism. Many clubs struggled with the capitalist reality of unified Germany and lacked the economic structures to compete with the rich clubs from the West. Investors promising a golden future without delivering much substance did the rest to destroy the infrastructure of many clubs in the region ensuring that no team from the former GDR plays in the top flight today. 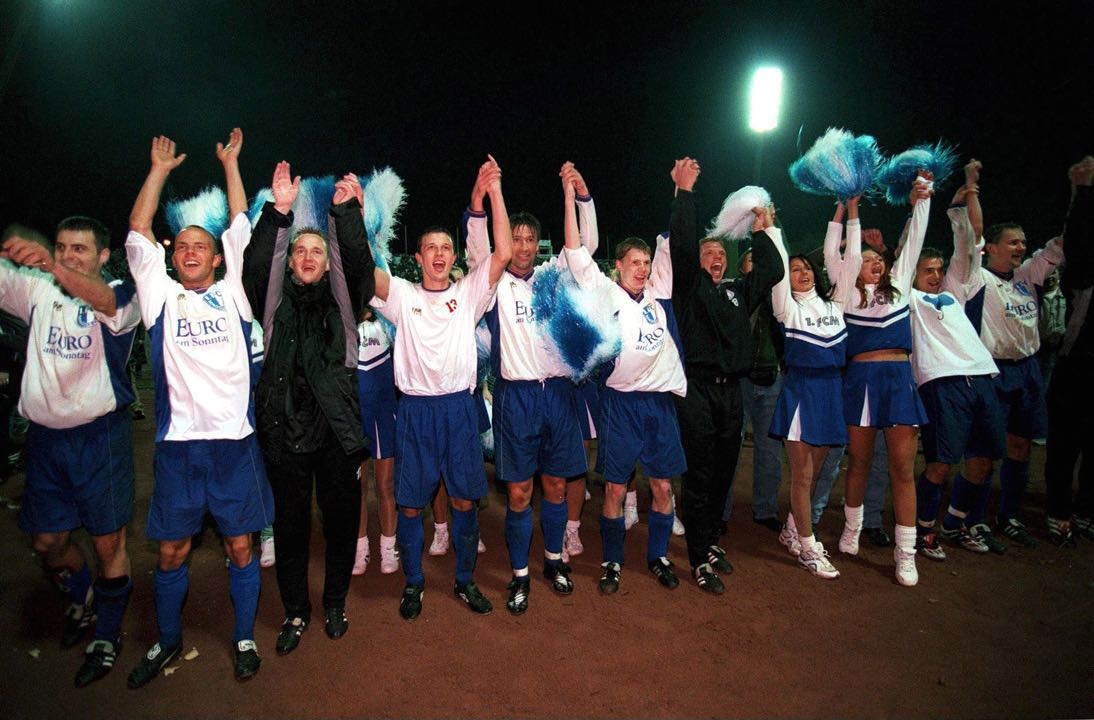 Magdeburg, for example, faced bankruptcy in 2000/01 despite the fact that the side reached the quarterfinal of the DFB Pokal eliminating the likes of Köln, Bayern München and Karlsruher SC before being eliminated by FC Schalke 04. In the end, the club was saved by the fans and two local banks, who came up with the €5 million the club needed to survive.

Despite moving to a new stadium in 2006, it took until 2015 for the club to create the right structures to create the sort of stability that could now lead to promotion to Bundesliga 2. Consistent management and hiring former RB Leipzig youth coach Härtel in 2014 has created the sort of foundation that allowed the club to start a long rebuilding process that could one day get Magdeburg back to the upper echelons of German football.

With Härtel in charge, Magdeburg now play an attractive style of football that makes many fans reminiscent of the 1970s and has created a believe that something big is happening at the club. That kind of feeling was captured by the ARD documentary earlier this month and rightfully places Magdeburg as a model club for the likes of 1860 München, who have fallen to the lower echelons of German football. Now on Tuesday Magdeburg will face Dortmund and not just a few fans will hope that the club can rekindle the Magdeburg cup spirit that made the club successful in the 1970s.