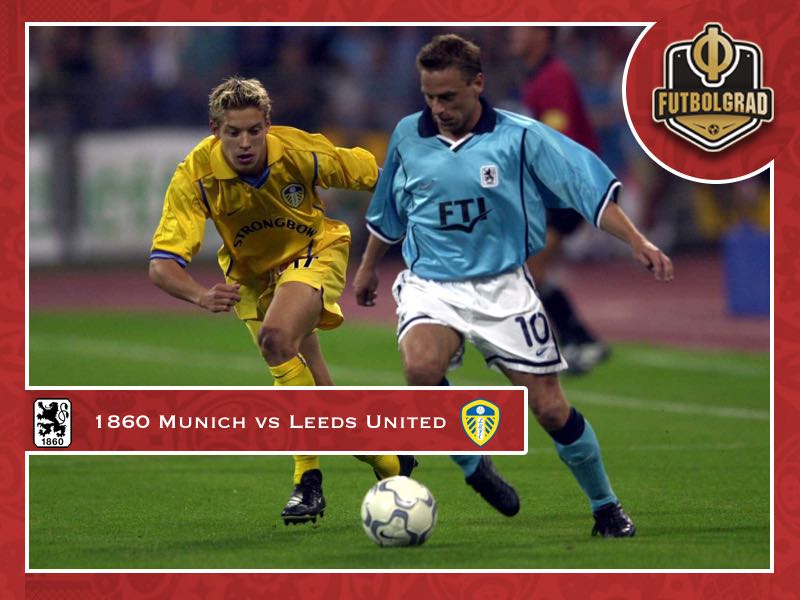 TSV 1860 Munich vs Leeds in the Champions League – it is hard to imagine nowadays, but back in 2000, those two clubs met each other for a spot in Europe’s biggest club competition at the qualification playoff stage. 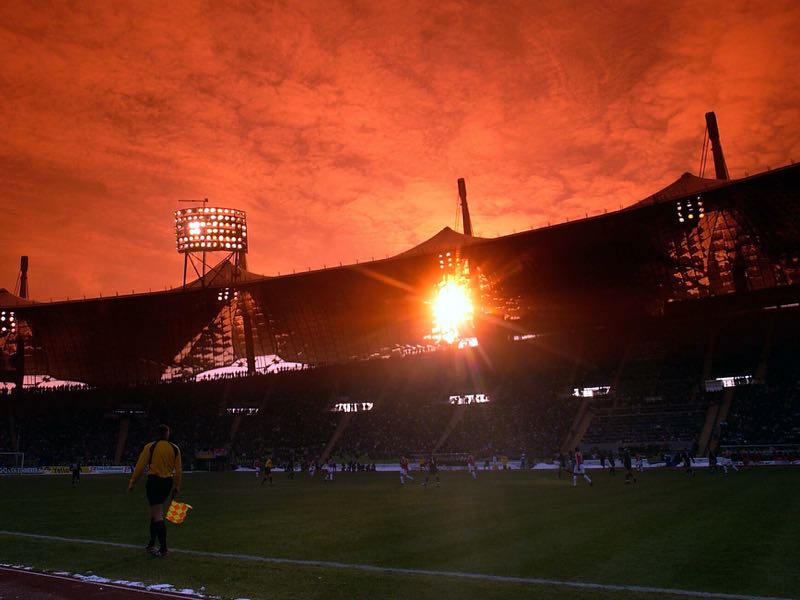 Relegation, financial meltdown and crazy ownership have marked the history of both clubs since. As a result, TSV 1860 München play in Liga 3 (third division) and Leeds United in the Championship (second division).

Back in August 2000, the ‘Lions’ of Munich and the ‘Peacocks’ from Leeds met in a two-legged qualifier, with the winners guaranteed a sum in the region of £25 million for simply reaching the group stages – so long ago that the Deutschmark (and not the Euro) was still in circulation.

1860 München were crowned Bundesliga champions in 1966 before their ‘noisy neighbours’ Bayern München had a lot to shout about. However, 1860 had never beaten English opposition, most famously losing to West Ham in the 1965 UEFA Cup Winners’ Cup final at Wembley. As recently as 1991, the Lions were plying their trade in the Regionalliga Bayern – a division not to be confused with the fourth division 1860 were playing in last season – after being denied a licence to play top-flight football, before rising up the league pyramid to the brink of Champions League qualification under brusque coach Werner Lorant.

A host of famous names from Leeds’ illustrious past made the trip to the Bavarian capital, gracing the media entourage. Johnny Giles, Joe Jordan and Peter Lorimer, as well as assistant Eddie Gray, were a reminder of the club’s glory days.

Leeds did have bitter memories of a previous clash with a Munich side after losing to Bayern in the 1975 European Cup final. On that night in Paris, Leeds considered themselves very hard done by. Bayern won 2-0, but not before the French referee had disallowed Lorimer’s seemingly valid goal and denied Leeds two clear-cut penalties. These decisions and the dismal defeat had sparked riots in the crowd, resulting in a European ban and a slump in the English club’s fortunes.

The Leeds side of 2000 was about to embark on some massive spending under Chairman Peter Risdale’s regime. The Yorkshire giants had every intention of “living the dream”, to ensure footballing success.

The English side travelled to Munich holding a slender 2-1 advantage from the first leg at Elland Road. Ex-Bristol City striker Paul Agostino grabbed a lifeline for the Lions with a precious late goal in Yorkshire, after the home side had been reduced to nine men with both Olivier Dacourt and Erik Bakke seeing red. 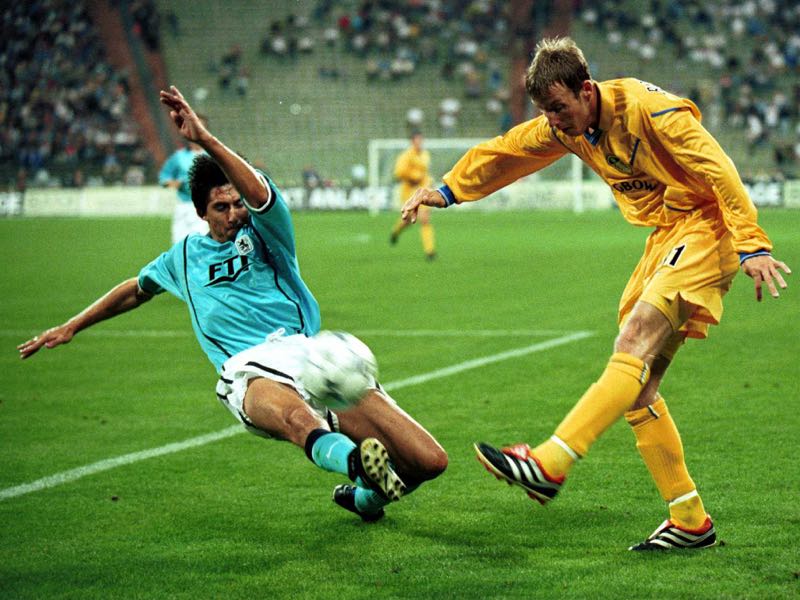 1860 Munich vs Leeds United – Lee Bowyer of Leeds crosses in as Daniel Borimirov of Munich comes into challenge him during the match between 1860 Munich and Leeds United in the UEFA Champions League Third Qualifying Round, Second Leg at the Olympic Stadium, Munich, Germany. (Clive Brunskill/ALLSPORT)

Leeds manager David O’Leary felt that the luck of the Irish had deserted him.

“I thought all the sendings off were wrong,” he said. “I thought they were a joke, unbelievable.”

As a result, Leeds were reduced to a skeleton squad, with O’Leary bemoaning his fate ahead of the big-money game in Munich’s Olympic Stadium.

“I don’t mean this as a joke, but I don’t know what side I can field for that game,” O’Leary complained.

“I’m not very confident about going through. I’m not being defeatist, I’m just being realistic, it’s no way to be going into the biggest game this club has had without nine players.”

As the hotly anticipated second-leg clash loomed, the Lions’ (now deceased) President Karl-Heinz Wildmoser viewed it as his club’s “most important game in three decades”.

Futbolgrad Network writer Mark Lovell was amongst the 56,000 crowd that turned up on a balmy summer night in the historic stadium, built for the 1972 Munich Olympics. Around 2500 travelling supporters were in fine voice after the customary pre-match lubrication with the local Munich product.

I can vividly recall the fiery Lorant prowling his technical area – a thick mop of grey hair, gesticulating wildly through a haze of cigarette smoke, trying to motivate his charges. 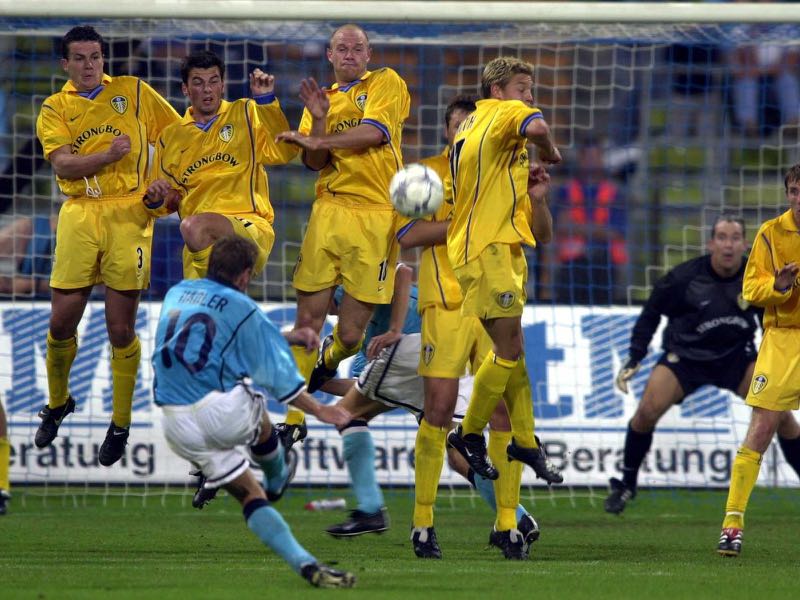 1860 Munich vs Leeds – Leeds wall keeps out Thomas Häßler of Munich free kick during the match between 1860 Munich and Leeds United in the UEFA Champions League Third Qualifying Round, Second Leg at the Olympic Stadium, Munich, Germany. (Clive Brunskill/ALLSPORT)

Hässler, 34 at the time, was coming to the end of an illustrious career but still ran the show in the middle of the park as the Lions pressed for a vital goal.

Current 1860 head coach Daniel Bierofka was a mere 21-year-old youngster making his way in the game on this heady night in Munich, while two-time Bundesliga top scorer Martin Max provided the goal threat in a lively Lions side.

Häßler almost broke the deadlock in the final seconds of the first half with a rasping free-kick from the edge of the box. Nigel Martyn was beaten all ends up in the Leeds goal, but the ball smacked against the woodwork to safety.

The game was decided immediately after the interval. Martyn punted long, aiming for the imposing figure of Leeds striker Mark Viduka, signed that summer from Celtic. The Aussie Viduka caused havoc in the box against 1860 Captain Marco Kurz, who later went on to manage the club. The loose ball fell nicely to Alan Smith, a Leeds-born striker, who was just 19 at the time. Smith dispatched with aplomb to seal a 3-1 aggregate win over the Lions, who had to make do with UEFA Cup football.

Man of the match was undoubtedly English international goalkeeper Martyn. The Cornishman made a string of fine saves to deny the hosts and keep the makeshift Leeds side ahead. 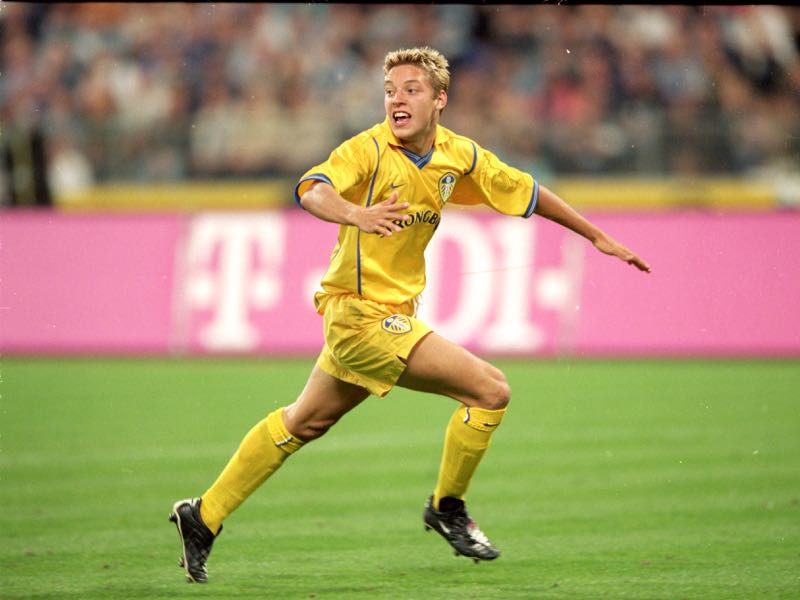 Ironically, the Lions’ “noisy neighbours” Bayern München later lifted the trophy, beating Valencia 5–4 on penalties after a 1–1 draw after extra time. The Spanish side had overcome a full-strength Leeds side in the semi-finals.

This was as good as it got for Leeds as living the dream proved unsustainable. Leeds slipped into administration in 2007, dropping all the way to the third tier of English football. Leeds are now back in the second division and have embarked on a fascinating project led by tactical genius Marcelo Bielsa.

It is a similar story in Munich. 1860 first dropped to the second division in 2004, and then after several years of financial instability, erratic ownership were relegated from Bundesliga 2 following the 2017 season. Lack of money and a fight between the different shareholders meant the club was not granted a licence for the third division and instead spent last season in the fourth division winning promotion at the end of the season after beating Saarbrücken in the playoffs.

Mark Lovell is the ESPN Bayern Munich correspondent and writes in English for a wide variety of print and digital clients including BBC Sport, FourFourTwo and Bleacher Report. Equally comfortable in a broadcast setting, he is a regular on live TV and Radio guest on international platforms such as CNN WorldSport, TalkSport and Sirius XM. He takes a special interest in 1860 Munich and Bayern as well as aims to touch on the burning footballing issues of the day, providing the kind of insight you only get by travelling the stadiums of Germany and Europe. Follow him on twitter @LovellLowdown