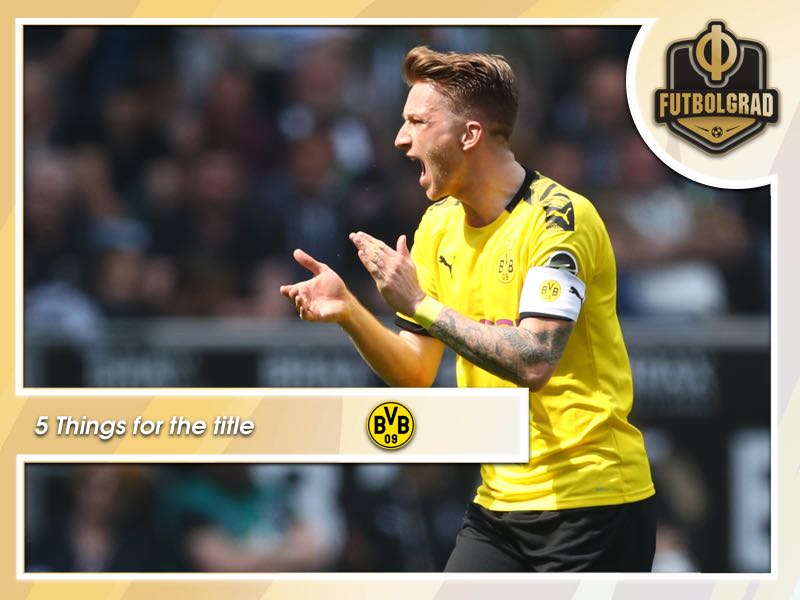 It was on. And then it wasn’t. And then it was again. Borussia Dortmund looked dead set to clinch their first Bundesliga title seven years. The history books will record a single name when listing the 2018/19 Bundesliga champions “Bayern Munich”, but those who saw it unfold before their eyes know it was a whole different story. Dortmund came damn close.

The odds are already out for Bundesliga winner for the 2019/20 season with Dortmund trailing at 5/1 while Bayern are favourites at 3/16. Find the best betting sites for your bet with BookiesBonuses.com whoever you decide to back.

As the adage goes, you miss by an inch; you miss by a mile. But what will it take for Dortmund to supersede their Bavarian rivals Bayern Munich and go one step further to glory next time round?

Show up in the big games

The margins are tight in Germany’s top flight. It took Bayern to the last day to lift the trophy, in what was the first title race the Bundesliga has seen in years. Bayern eventually went on to win their seventh title in a row, but at one point it was Dortmund’s to lose.

If they’re going to do one better, Dortmund will need to find the guile to win key games when the pressure is piled on most. In the first half of the season, it looked like they were set to do just that, getting the better of Bayern at the Westfalenstadion in a tight 3-2 thriller. 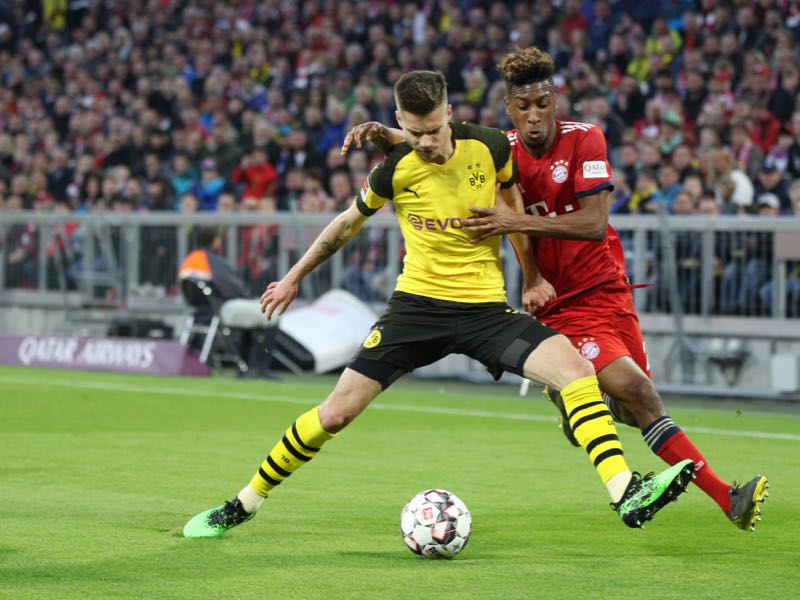 Fast forward to the reverse fixture five months later, and Bayern looked set to make a comeback in the title race by the time the two went head to head at the Allianz in Munich. Bayern preceded to dismantle Dortmund in an excruciating first 45 minutes of utter dominance.

The impact was huge. Bayern were firmly back in the mix, and a deep psychological blow was dealt to Dortmund in the process.

Incredibly it wasn’t all over just yet. Bayern slip-ups still meant Der BVB were still in with a shot. Their derby match in Gelsenkirchen against struggling Schalke was a chance to right the wrongs but Dortmund crashed to a 2-4 defeat.

A week later they dropped two points away to Bremen, results that ultimately cost them the title.

Borussia Dortmund must prioritise the league

Borussia Dortmund have long been a mainstay of top-level European football. They’ve featured in the group stages of the Champions League in seven of the last eight seasons.

The competition is written into the club’s DNA. They were one of first to enter the nascent European Cup back in the 1950s and eventually clinched a highly sought after Champions League trophy in 1997.

This season though they’ve struggled, and despite Lucien Favre fielding a full-strength side for both legs in the round of 16, they were comprehensively beaten by Tottenham Hotspur 4-0 on aggregate. Similarly, Bayern were brushed off with relative ease by Liverpool.

The competitiveness of the Bundesliga this year, combined with the exertions of the Champions League, are too much for Germany’s giants to handle. Particularly in Dortmund’s case, it would be better for the club to focus their attentions and energies on being the masters of their backyard at present.

Keep Favre and his philosophy

Appointing Lucien Favre ahead of the 2018/19 was a masterstroke. Favre is more than familiar with the Bundesliga from his time at Borussia Mönchengladbach and immediately imposed his ideals on the Dortmund setup.

His efficient and hardheaded form of football is something the Borussia’s faithful have come to expect, but it was his signings that allowed their football to blossom on the pitch.

Axel Witsel and Thomas Delaney were both brought in ahead of the new season and provided the bedrock in midfield for Dortmund to dominate games and push forward with ferocity and intent.

Favre has also showed his fondness for youth by promoting Jadon Sancho to a key role in the team, which is a key cornerstone ideal of the club itself. The English youngster has turned provider for another of Favre’s signings, Pablo Alcácer, who has lit up the Bundesliga since arriving from Barcelona last summer.

Favre has had the biggest impact on Dortmund arguably since Jürgen Klopp and is the crucial component if Die Borussen are going to have any immediate or even long term success.

Dortmund have been a consistent breeding ground for talent season after season, only to see their best players snatched from under their noses time and again. They are in an almost constant state of flux, a perennial state of rebuilding. As soon as they begin to scale the heady heights of success, their players are unwittingly pilfered.

Since their Champions League final defeat to Bayern back in the summer of 2013, they’ve lost the likes of Robert Lewandowski, Pierre Emerick-Aubameyang and Ilkay Gündogan just to name a few. That’s the current top scorer of the Bundesliga, the latest joint-top scorer of the Premier League, and a two-time Premier League winner that they used to have on their books.

Fast forward to 2019 and the situation is no different. Take Jadon Sancho as a prime example. Since arriving at Dortmund from Manchester City’s youth academy, Sancho has emerged as one of the most exciting talents in European football.

Sancho will likely leave at some point, but Dortmund need to hold on to him for as long as possible. This Dortmund side, though missing out on the title, has a key nucleus of players in their squad. Sancho is one of them.

It’s unlikely that local lads Marco Reus and Mario Götze will be leaving anytime soon, but Dortmund face question marks over retaining players key to their defensive line, as well as their star striker Pablo Alcácer. 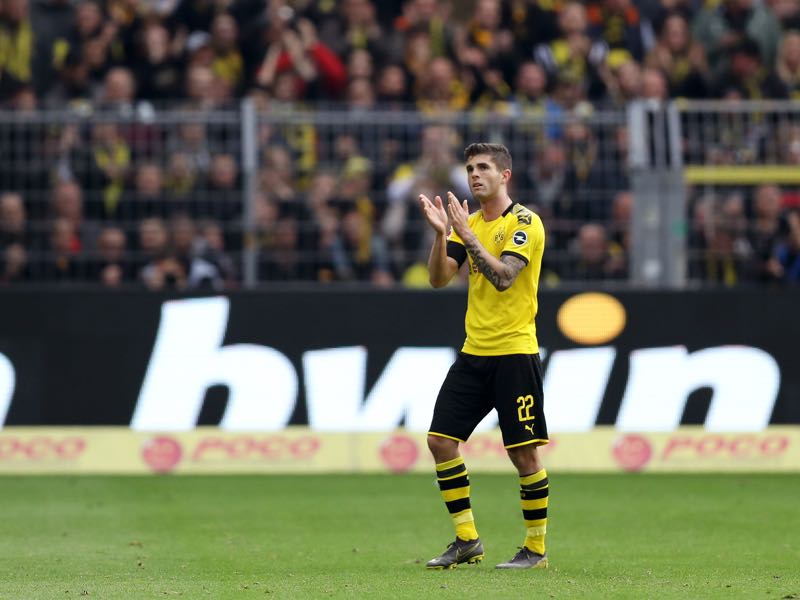 Christian Pulisic of Borussia Dortmund acknowledges the fans in his final game for the club during the Bundesliga match between Borussia Dortmund and Fortuna Duesseldorf at Signal Iduna Park on May 11, 2019 in Dortmund, Germany. (Photo by Maja Hitij/Bongarts/Getty Images)

True to form, Dortmund have already cashed in on USA international and rising star Christian Pulisic, who departed for Chelsea to the tune of the €60 million.

Die Schwarzgelben are masters of sourcing talent and helping them to achieve their potential. The only question is – does it win them titles? No.

Speaking of winning titles, the one thing the stats nerds can’t quantify for you is the impact of having a winning mentality in your team. Part of Bayern’s resurgence in the closing stages of the Bundesliga campaign was a question of form, experience but also of having the right mentality – the desire to win.

One of the major problems winning teams encounter when it comes to retaining their success is finding the motivation to win. Another is picking yourself up when you’re down, and having that belief in yourself and your teammates to get the job done.

Ultimately, this season, Dortmund couldn’t finish what they started, but they weren’t far off. If they can build on this season’s foundation, then there’s no reason why they can’t do one better next time round.