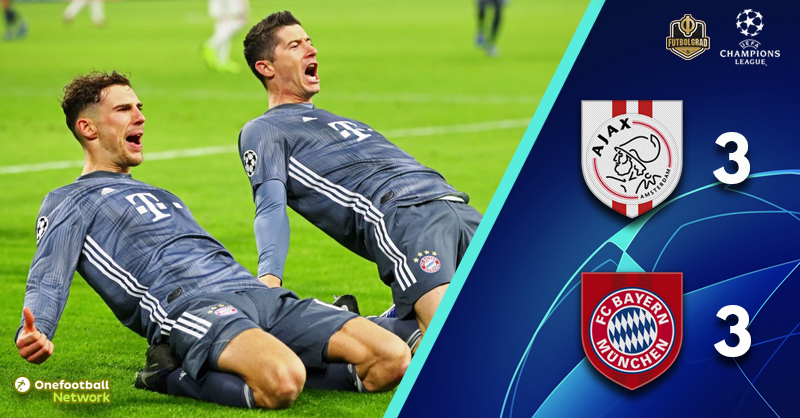 Ajax v Bayern had everything. Six goals, two red cards and two teams playing the sort of attacking football that we have not witnessed in an encounter between these two European giants since the 1970s.

Both Ajax and Bayern came out of the dressing rooms guns blazing. Serge Gnabry (1′) saw a shot from inside the box go just wide, Robert Lewandowski (4′) saw a ball from the right edge of the box go wide, and Gnabry once again (9′) was through but had his shot stopped by Andre Onana. Meanwhile, Ajax broke into Bayern’s box in the 2′ minute, but Manuel Neuer was on guard to stop a shot by David Neres.

It was a quick back and forward in the first ten minutes in which Bayern was the better side. In the 12′ minute Gnabry should have finally taken the lead. The forward was through one-v-one with Onana, but his shot from just outside the box was tipped over the bar. From that ensuing corner, Bayern took the lead. Initially clearing the cross, the ball was played back into the box to Lewandowski, who made no mistake to score the opener in the 14′ minute.

Ajax, however, did not change their game plan and continued to play attacking football. In the 17′ minute Hakim Ziyech tested Neuer with a shot from a distance and in the 18′ minute Daley Blind had two shots blocked inside the box by Bayern’s defence. Then in the 25′ minute David Neres sent a perfect cross inside the box where Donny van de Beek tested Neuer with a great header.

Going straight back the other way in the 26′ minute Bayern should have made it 2-0. Thomas Müller played a great ball through the channel into the box to Gnabry, who spotted Lewandowski in the centre, his shot, however, was kept out by Onana and the follow-up by Joshua Kimmich went over the bar.

Just before halftime Ziyech once again tested Neuer from a distance but was unable to beat the keeper. It was a classic Ajax v Bayern encounter that had a bit of the rivalry that defined the two teams in the 1970s in the first half. Bayern’s experience was perhaps the difference in the first interval with Ajax at times being a little naive when it came to converting their chances and also defending their goal.

The second half continued where the first half ended. Both teams treated the centre-third like a staging ground that had to be quickly crossed to orchestra ever more attacks. Ajax had the majority of the play in the first ten minutes of the second interval, and perhaps the only thing that was lacking from the Amsterdamers was missing that final pass that would uncork Bayern’s defence.

In the 60′ minute, Ajax finally found a way through. Frenkie de Jong sent de Beek into the box, the midfielder sprinted to the byline and played a ball across the six-yard box to Dusan Tadić, who easily tapped the ball across the line to give the home side the equaliser.

Five minutes later in the 65′ minute, Bayern should have retaken the lead. Lewandowski was left unmarked free in the box, and his header had the goal-shout on the tip of the tongues of all Bayern fans inside the stadium, but Onana stretched out to produce an incredible save. Then two minutes later the game tipped in Bayern’s favour after Maximilian Wöber was sent off for a reckless challenge against Leon Goretzka in the 67′ minute.

Not that Bayern’s advantage lasted very long. Because in the 76′ minute, Müller hit Nicolas Tagliafico with what looked like a karate kick to the head drawing blood. Although Müller was clearly going for the ball Referee, Clément Turpin had no choice and rightfully sent the German off.

That red card opened it up completely, and both sides were now looking for the winner. In the 79′ minute Rafinha broke into Ajax’s box and almost went all the way only to see his ball cleared at the last moment. Ajax immediately broke the other way, and Kasper Dolberg was brought down by Jérôme Boateng inside the box. Tadić stepped up and converted the penalty to make it 2-1.

This was now a dramatic encounter that had another twist. In the 86′ minute Bayern’s Thiago walked into Ajax’s box and was brought down by an Ajax defender. Lewandowski stepped up and rolled the penalty just inside the left post of Onana’s goal. But the two teams were not finished there yet.

In the 90′ minute, Bayern were driving forward once again. The ball landed at Kingsley Coman’s feet, and the French forward unleashed a curled shot that whizzed past Onana into the far corner of the goal to restore the lead for the Bavarians. With seven minutes added, however, Ajax managed to find another goal in the fourth minute of extra-time.

A long ball into the box found Klaas-Jan Huntelaar unmarked in the box, the striker played the ball across the six-yard box to Tagliafico, who beat Niklas Süle to make it 3-3. It was the final action of a game that had everything, six goals, two red cards and two teams that went all out to win the game.

Dusan Tadić was the man of the match. The Serbian striker scored two goals and played a key pass ahead of Ajax’s third goal. The forward was a constant threat to Bayern’s backline throughout the 90 minutes and was a joy to watch. 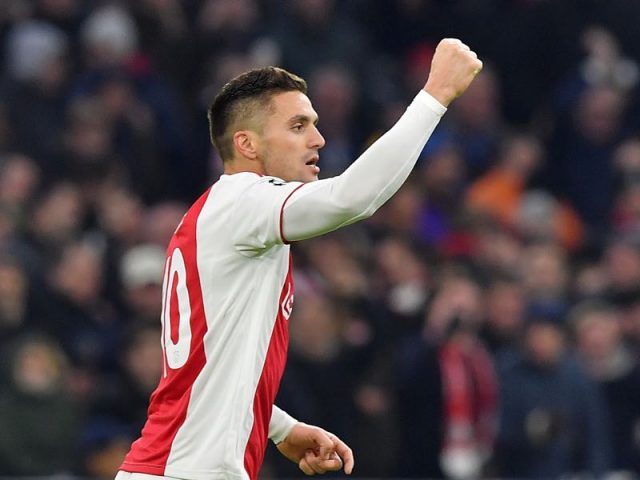 On the surface, there was not much on the line in this one. But finishing first in the Champions League is crucial and, as a result, both Ajax and Bayern went all out to win this game. In the end, Bayern win the group thanks to a 3-3 draw that secures them the top spot thanks to the better head-to-head. For neutrals, this was a football festival the sort of game that shows that the football rivalry between the Netherlands and Germany could be back on as Dutch football seems to be resurgent at the moment.