André Schürrle – What is Next for the BVB Star?

What about André Schürrle? The attacking winger who assisted on Mario Götze’s goal that brought Germany their fourth World Cup in the 2014 FIFA World Cup final against Argentina is a bit of a ghost at Borussia Dortmund at the moment.

Brought in last summer from Wolfsburg to fulfil Thomas Tuchel’s desire to work once again with the winger, who he fostered during their time together at Mainz 05, Schürrle never fulfilled the expectations that came with the €30 million price tag. Some would even argue that Wolfsburg—the Volkswagen owned club signed Schürrle 18 months prior from Chelsea for €35 million—laughed all the way to the bank after they were able to recover almost all the money they spent on the winger.

Another factor was that Dortmund tried to create something that perhaps would have never worked in the first place anyhow. Ever since leaving Bayer Leverkusen for Chelsea Schürrle struggled to show his potential. Sure, there were glimpses of magic—the goal against Brazil in the World Cup semifinal, the assist at the World Cup final and goals scored from the half field with spectacular precision.

Those moments could be found less and less, however. Instead, Schürrle looked like a shadow of his former self at Wolfsburg, who had brought him in to underline their title aspirations. Those ghostly appearances at the Autostadt were, however, not enough to discourage Dortmund.

Dortmund Needed to Make a Statement

Perhaps they believed that re-uniting Schürrle with Thomas Tuchel would be what the player needed. In fact, however, there were plenty of people thinking that €30 million for Schürrle were a waste of money. But one also needs to remember the context of the time.

Dortmund were a bit under pressure. CEO Hans-Joachim Watzke had told the fans that at least one of Henrikh Mkhitaryan, Mats Hummels or Ilkay Gündogan would stay with the club by the end of the 2015-16 season. In the end, they were all gone, and Dortmund needed present new faces.

Signing Schürrle at the time was a statement of intent that the club was still a serious contender. But Schürrle never managed to fully get his foot in the door thanks to a series of injuries and the likes of Ousmane Dembélé and Christian Pulisic creating magic on the field. 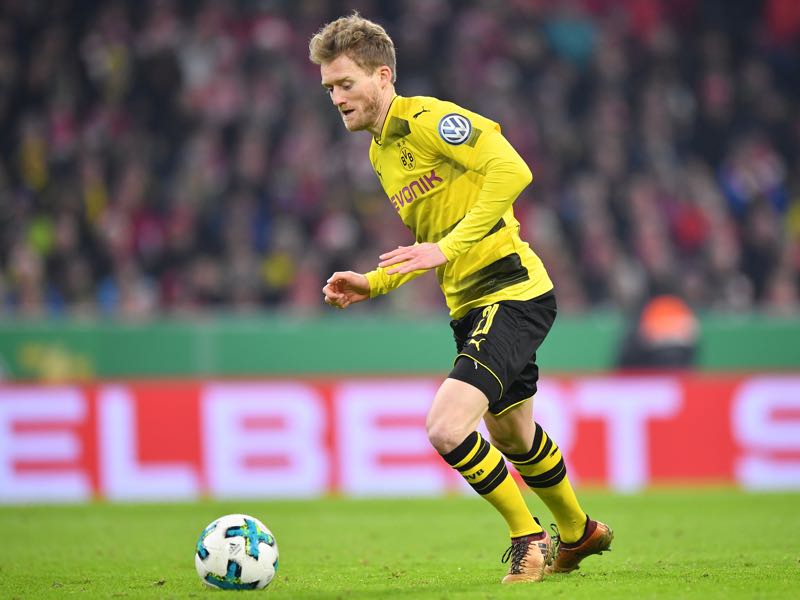 André Schürrle came on against Bayern in the Pokal. (Photo by Sebastian Widmann/Bongarts/Getty Images)

Ahead of this season, one could almost forget at times that Schürrle has been part of this BVB squad. Four appearances in the Bundesliga, in which he managed one assist, attest to the general observation that Schürrle played very little part in Peter Bosz’s plans. Sure, injuries once again played their part too, but when he did come on he never managed to have an impact.

Schürrle Needs to Stick at out at a Club

With the change to head coach Peter Stöger Schürrle could hope that things will turn for the better and the Austrian head coach did bring him on in the second half against Bayern München. Schürrle was not bad in that match to be fair. In fact, his substitution was followed by Dortmund almost getting back into a match where they were thoroughly outplayed.

What followed, however, were statements by the management that Schürrle’s lack of playing time was an issue and that they may have to look at other options for the winger. Loan moves to Stuttgart and West Ham United have since been floated.

Heading back to the English Premier League might indeed be the best option for the winger—especially as clubs could afford his salary. But for him to not fall into the fallen talent category, Schürrle may have to go to a club where he is needed now or even better stick it out at Dortmund and finally show that he is worth the money that the Yellow and Blacks invested in him almost 18 months ago.