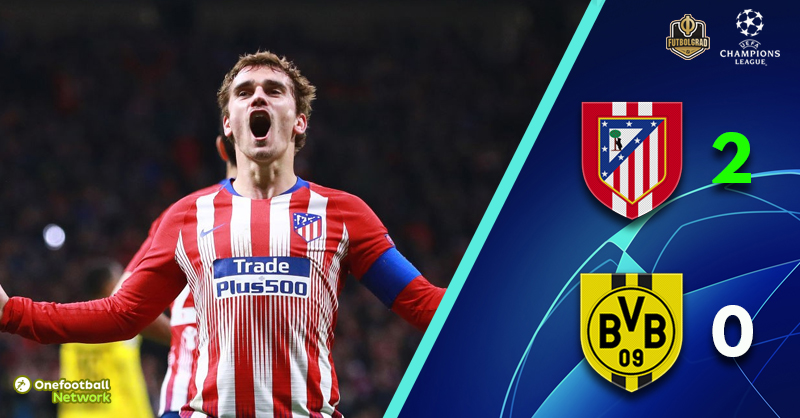 Atletico Madrid v Dortmund saw the two favourites of Group A go against each other for the second time in two weeks. Atletico Madrid were soundly beaten 4-0 by Dortmund a fortnight ago and today they got their revenge beating Dortmund 2-0 at home.

Atletico Madrid were out for revenge playing aggressive football from the very beginning. Pressing Dortmund deep into their half Atleti had the first chances with Antoine Griezmann (10′) and Angel Correa (14 and 22′) testing Dortmund keeper Roman Bürki early on.

Despite having 66% ball possession at the halfway stage of the first half, Dortmund found it tough to get out of their half and put any pressure on the Madrid-based club. Atletico were happy to give the Yellow and Blacks the ball and break forward quickly when gaining possession.

In the 35′ minute Madrid took the lead in that fashion. Breaking forward quickly Atleti managed to get several players into Dortmund’s box, and the ball would eventually end up with Saul Niguez, his shot from close-range was deflected by defender Manuel Akanji, who came too late to prevent the goal.

Atleti were not done there and created further chances, Thomas (37′), Felipe Luis (38′), Correa (40′), and Nikola Kalinic (43′) had further chances to run up the score. At that stage, Dortmund were rattled like a price boxer that had received too many shots to the head and were happy when they were rescued by the halftime whistle.

Dortmund were better to contain Atletico to start the second half. But at the same time, the Yellow and Blacks struggled to produce anything tangible up front. Atleti, in the meantime, were happy to sit back absorbing the pressure without creating too much offensively.

It took until the 62′ minute until we saw the first chance of the second half. Once again it was Atletico’s Correa. The winger broke through on the right, and his shot was just wide of the target. That might have woken Dortmund up because in the 64′ they finally had their first chance with Raphaël Guerreiro’s header missing the goal from just three yards out after a perfect cross from Paco Alcacer.

That was the last chance of the match until the 80′ minute when Atleti doubled their lead. Dortmund tried to stamp their control on the match and Madrid used the room created in Dortmund’s defence. Thomas broke forward and spotted Griezmann at the centre of the pitch, the Frenchman escaped Dortmund’s defence and beat Bürki with a wonderfully placed shot from just ten yards out.

It was the knockout punch for the Yellow and Blacks. Dortmund continued to press high up the field but today lacked the creativity to find the goal that would have gotten them back into the match.

Antoine Griezmann was the man of the match. The Frenchman was unplayable at times and scored the second goal of the game. He also won five of his eight duels and was also sound defensively winning three of his three tackles. Overall, an incredible performance by Atletico Madrid’s key player.

Dortmund are finally beaten and rightly so. Lucien Favre’s men could never find a way into the match as Atlético Madrid shut down Dortmund’s attack without any problems. Dortmund had 69% ball possession but could not figure out what to do with the ball in the final third as Atletico easily shut down the attacking channels in which Reus, Sancho and Co. could play the ball into. Paco Alcacer on top was completely isolated, and as a result, Dortmund managed not a single shot on target.