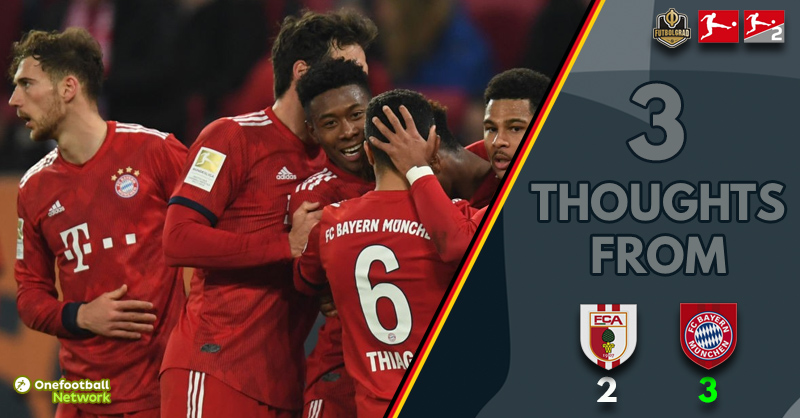 Augsburg v Bayern München kicked off heavily favouring the Rekordmeister. Augsburg were struggling with injuries, and Bayern could narrow the gap to Dortmund, who are playing on Monday to just two points, and the Rekordmeister did just that although with some significant problems against a limited Augsburg side.

Augsburg went into the game with some significant injury problems. Most prominently the club were without striker Alfred Finnbogason. Nonetheless, the Fuggerstädter were able to take an early lead thanks to one of the fastest own goals in Bundesliga history scored by Leon Goretzka. Even when Bayern equalised Augsburg kept fighting and scored the second courtesy of Korean forward Dong-Won Ji.

The equaliser just before halftime, scored by the excellent Kingsley Coman, ultimately could have opened the floodgates and indeed Bayern did not take long in the second half to score a third. But Augsburg did not collapse and were in it until the final minutes of the game.

“When you go into a game with a lead like that the final result is somewhat dumb. We did well scoring the second, and it was annoying to concede in 45 plus third minute in the first half,” head coach Manuel Baum said after the game. “In the second half Bayern were dominant, but towards the end we had chances,” Baum further said.

“Our goal was to play gutsy football. The centre-backs, Reece Oxford and Kevin Danso, were young but it is good that they got to challenge themselves against a top striker like Lewandowski, and they did well,” Baum concluded.

It took Augsburg just 15 seconds to score the first goal of the game. The right flank, patrolled by Joshua Kimmich was easily sliced open by Philipp Max, and Goretzka aided Augsburg’s efforts. Kimmich’s side was also carved open ahead of the second goal and, to top things off, Bayern’s centre had problems dealing with the low cross making it easy for Ji to score his goal.

“To be down after 10 seconds is not what we expected,” Kovac said. “We knew that Augsburg wanted to play man against man and that they are a physical side. We couldn’t organise the side, and it took 35 minutes to settle it somehow, overall it is a deserved victory.” 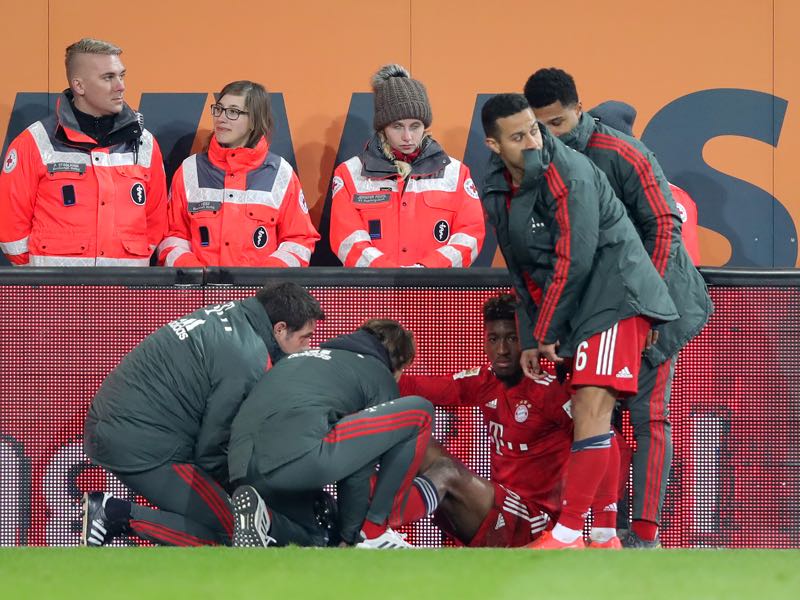 Augsburg v Bayern München – Kingsley Coman of Muenchen sits injured on the pitch during the Bundesliga match between FC Augsburg and FC Bayern Muenchen at WWK-Arena on February 15, 2019 in Augsburg, Germany. (Photo by Alexander Hassenstein/Bongarts/Getty Images)

“Every shot is a goal at the moment. When we have the ball, we don’t play like I expect the team to play. The second goal is a good example, the second ball with the room in the back is something that can’t happen, Liverpool would punish us for that sort of mistake,” Kovac added.

“Is that the team that will play against Liverpool? Players can play themselves into the side but also out of the squad,” Kovac said. “Defensively we need to be better working backwards, and that is something that will be going into my analysis,” the Bayern head coach added.

“He is pain. But it looks like another ankle injury. It is disappointing because with him in the side we have a different dynamic. But we will find out about the results tomorrow,” Kovac said after the game.

Coman missed most of the first half with a serious ankle injury sustained in the game against Hoffenheim. Coman has been a crucial player for Bayern. With him, in the side, Bayern are faster and more dynamic and can overwhelm any defensive line in the world.

Coman’s replacement could be Frank Ribéry. The Frenchman no longer can go the full 90 minutes, however. Alphonso Davies could be another option. With Coman out, Thomas Müller banned, the young Canadian could now play a significant role against Liverpool next Tuesday.