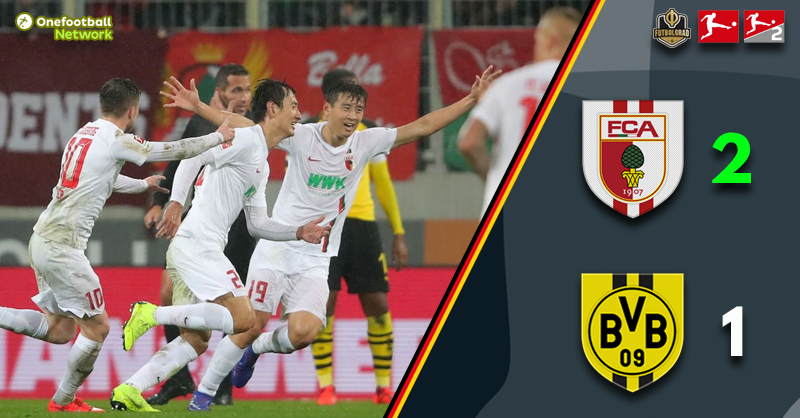 Although Dortmund had the majority of possession, to begin with, Augsburg did well to contain Dortmund despite missing key players. Nonetheless, Dortmund had chances, Marco Reus failed to chip keeper Gregor Kobel (6′) Jadon Sancho (15′) had a shot blocked on the edge of the box and Manuel Akanji saw a header stopped by Kobel in the 20′ minute.

Dortmund’s biggest problem in the first half was the buildup play with Axel Witsel, in particular, struggling. Lack of composure in midfield and defensive problems gifted Augsburg the opening goal of the match.

In the 25′ minute, Dan-Axel Zagadou easily gave the ball away to Jonathan Schmid on the right, Schmid’s cross found Dong-Won Ji in the box. The Korean striker had his first shot blocked by BVB defender, but Dortmund were unable to clear the ball and Ji was able to score on the rebound.

That goal put Dortmund out of sorts completely for the rest of the first half. The Black and Yellows could not establish any flow in midfield to seriously put Augsburg under pressure. Nonetheless, Dortmund almost found an equaliser just before halftime Thomas Delaney managed to hit the ball over the bar from just six yards out following a Reus freekick in the 41′ minute and Jacob Bruun Larsen was denied one minute later from only a few yards out by Kobel.

It was more of the same to start the second half. Dortmund had 71% possession but were also already dispossessed on eight different occasions with 55 minutes played. Dortmund struggled to break down a well organised Augsburg side that was siding deep with two defensive lines in front of the penalty box.

Instead, Augsburg got a second in the 68′ minute. Hakimi easily gave the ball away in the middle of the park to Ji, the Korean side stepped Zagadou and chipped the ball past Dortmund keeper Bürki to make it 2-0. It was a goal that summed up Dortmund’s play of late; always commanding the Black and Yellows lacked precision over the last few weeks.

Could Dortmund find a way back into this? The biggest chance fell to get back into the game fell to Paco Alcacer in the 76′ minute. The Spaniard had escaped Augsburg’s defence after a long ball, and his dropkick seemed destined to beat Kobel, the Augsburg keeper pulled off a miracle stop to keep Dortmund off the scoresheet.

Four minutes later Paco Alcacer would not be denied. Augsburg’s Georg Teigl gave the ball away to Sancho inside the right-side of the box, the Englishman played the ball to Götze, who, in turn, spotted a wide open Alcacer on the left and the Spaniard made no mistake to score from just eight yards out. That goal set off a furious ten minutes in which Dortmund threw everything but the kitchen sink at Augsburg to get the equaliser. But Augsburg held on and managed to secure their first-ever home win over Dortmund.

Dong-Won Ji was the man of the match. The 27-year-old was on Dortmund’s books in 2010 but had an absolute nightmare season under Jürgen Klopp. Today he turned into Borussia Dortmund’s nightmare scoring two fantastic goals with two chances, putting a massive dent into his former team’s title hopes.

Spring is approaching and Dortmund’s title hopes are melting away faster than the snow in the hot Bavarian spring sun. Going into February Dortmund had an eight-point gap over six times in a row Bundesliga champions Bayern München. Bayern will face Gladbach in a difficult game on Saturday in the Topspiel but will be hugely motivated knowing that with a win they could go even on points with Dortmund at the top of the table.