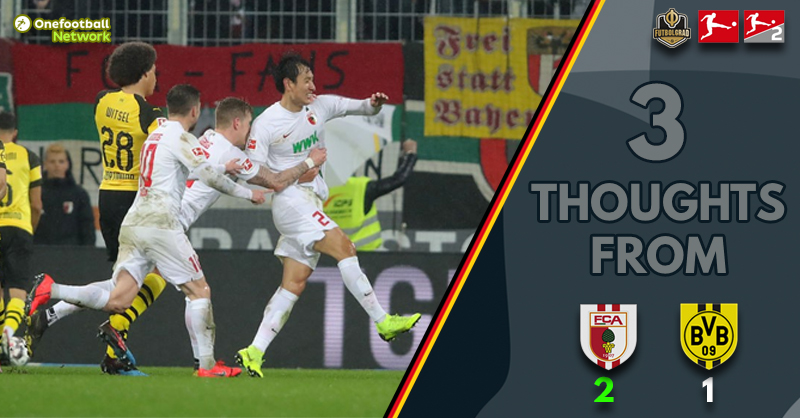 For only the second time this season, Lucien Favre’s side tasted the sourness of defeat as Augsburg vs. Dortmund ended in a shock home victory. 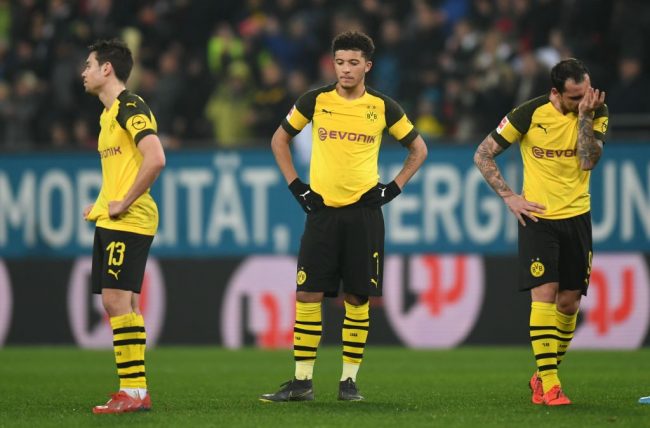 Victory against Bayer Leverkusen last weekend led to a thought that Dortmund’s mini-crisis may be over – however, a shock defeat at the hands of Augsburg showed that February’s woes have leaked into March.

The Yellow and Blacks only managed to secure six points from a possible 12 on offer during February, as well as losing in both the DFB Pokal and the Champions League – hardly the form of Meisterschale winners.

Friday’s performance in Bavaria did little to dispell a feeling that the champions-elect have hit a rough patch at a time that is normally reserved for title pushes.

It might only be their second loss of the season, but three draws in recent weeks (two against relegation-threatened sides) could potentially derail what looked to be a Dortmund dead cert come May.

If Favre’s men are to recapture their early season form they will need to ensure individual errors are stamped out. Dan-Axel Zagadou and Achraf Hakimi had a night to forget as both their mistakes were punished by Ji Dong-Wan.

While their normally dependable midfield and first-line of attack also looked way under par, in a display similar to that seen at Wembley recently against Tottenham Hotspur. 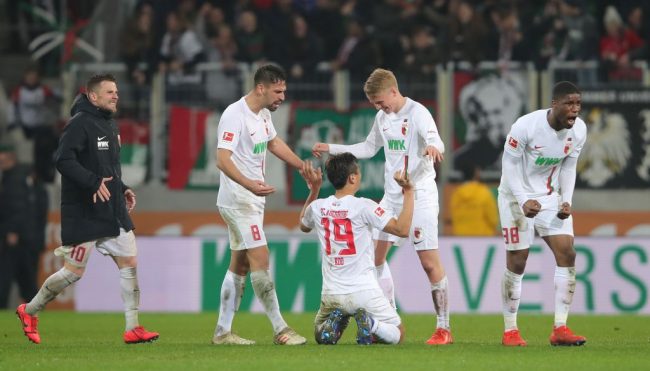 Koo Ja-Cheol celebrates with his teammates at the end of Augsburg vs Dortmund. (Photo: Alexander Hassenstein/Bongarts/Getty Images)

After falling short against regional neighbours Bayern two weeks ago, tonight Augsburg got the result their play deserved.

From the first whistle the Fuggerstädter harassed and pursued their table-topping opponents – not allowing Dortmund to create any sort of sustained attacking rhythm.

Even on the odd occasion when the visitors broke through their last line of defence, Gregor Kobel stood strong. It was only the addition of super-sub, Paco Alcácer that gave Dortmund late hope.

For the first time in four years Augsburg finally registered a win against Dortmund. Their last three points came in the Westfalenstadion during February 2015.

With only two home wins all season prior to this evening, there could only have been wild hope from those on the terraces that a victory was possible.

The hosts had conceded 11 goals in just three games, and after a 5-1 hammering by Freiburg last weekend tonight’s result came as a massive surprise. How big this victory is will only be known in May, but as it stands there is now a five-point cushion between Augsburg and 16th placed Stuttgart.

Augsburg vs. Dortmund: What now for the title race? 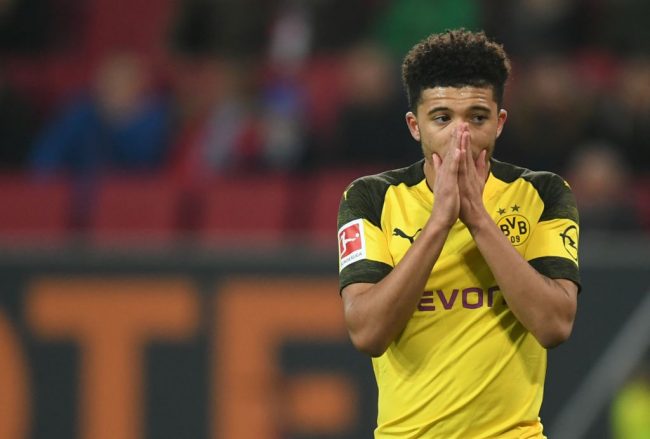 Jadon Sancho looks on as Dortmund slump to their second defeat of the season during Augsburg vs. Dortmund. (Photo: CHRISTOF STACHE/AFP/Getty Images)

With a commanding six-point lead over Bayern on Matchday 20, Dortmund are now left with the real possibility of being locked on the same number of points as their main rivals in 24 hours time – although Borussia Mönchengladbach might just have something to say about that when the two sides clash in tomorrow night’s Topspiel.

Dortmund will be hoping their fellow Borussen can help them out with either a victory or draw against the reigning champions – but what once looked rosy has certainly taken a turn for the worse at the most crucial of times.

April’s Klassiker in the Allianz Arena could be the ultimate title decider, something no visiting team would wish to face. With Tottenham rolling into North Rhine-Westphalia this coming week, Dortmund’s exit from the Champions League may be a blessing in disguise.

With only one competition left to fight for, placing all their eggs in one basket (while hoping March doesn’t become the new February) might be all that Dortmund have left.

Chris Williams is a freelance European football journalist. Covering the Bundesliga, Premier League and both of UEFA’s European club competitions. Published in both local and international publications, he also contributes to television and radio across the globe. A member of the UKís Sports Journalist Association and the International Sports Press Association (AIPS). Follow Chris Williams on Twitter @Chris78Williams