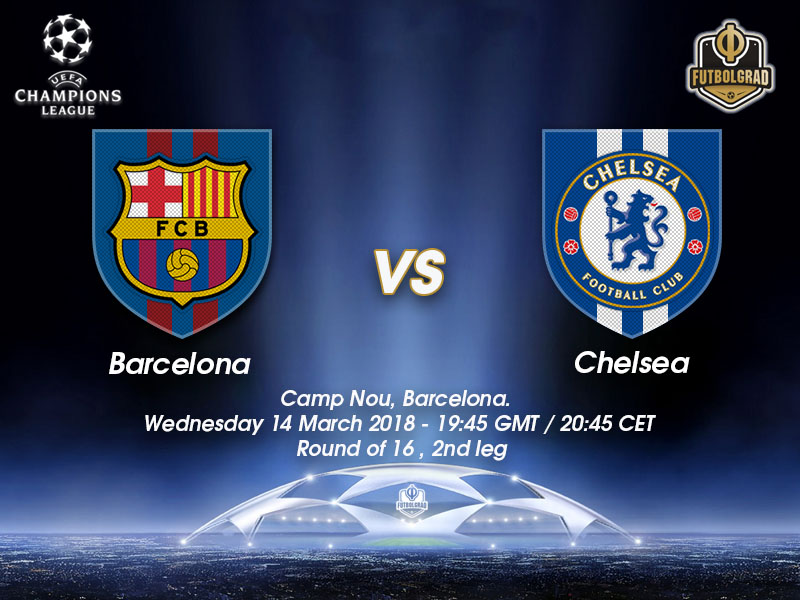 In the first leg at Stamford Bridge, Lionel Messi’s first goal against Chelsea – in his ninth fixture – cancelled out Willian’s opener and ensured Ernesto Valverde’s side returned to the Catalan capital with a 1-1 draw. Willian twice struck the woodwork, as Chelsea made it eight games without defeat against the Blaugrana.

Although the hosts have a valuable away goal they will be more than aware of the threat carried by Antonio Conte’s West London side. It was the English champions who came out on top last time the two sides faced each other back  in 2012,  Fernando Torres broke clear in added time to confirm Chelsea’s place in the final, where they would go on to defeat Bayern München to win their first UEFA Champions League title.

Barcelona welcome Chelsea to the Catalan capital with the hosts in tremendous form. Beaten only once this season, across three competitions they provide a real test for any side that takes to the pitch at the Camp Nou. With 12 goals scored in their last five league games the Blaugrana have the firepower to reach the next round, meanwhile at the back they have been resolute – conceding only three goals in their seven UEFA Champions League games. Favourites for what would be their 25th La Liga title – thanks to an eight-point gap to nearest rivals Atletico, this competition would be the icing on their season. Propelled by a side littered with quality it would be difficult to see anything but another appearance in the quarter final stage for Valverde’s men.

In comparison to their hosts, Chelsea’s season has been underpinned by constant questions surrounding the future of Antonio Conte. The Italian has frequently been linked with a West London exit – however, as the end of the season looms large he still remains the main man in the dugout. The Chelsea manager knows the magnitude of the task ahead of him this coming Wednesday,  in a change to normal proceeding Conte sought the help of his squad to decide exactly how the Londoners are to go about dismantling a Barcelona side rich in talent.

Chelsea will be buoyed by their performance in leg one, the Blues outplayed the Catalans for the most part of the opening fixture to this tie. Willian in exceptional form before their talisman, Lionel Messi rescued the game with a valuable away goal.

Barcelona vs Chelsea – Players to look out for:

The Uruguayan has gone from strength to strength since his move to La Liga just under four years ago. In his first 100 appearances for Barcelona the 31-year-old had a higher combined total of goals and assists than Cristiano Ronaldo managed in the same number for Real Madrid – quite the start. This season however, the Barcelona forward is yet to register a goal in the UEFA Champions League – unable to find the net in his previous seven games. Don’t let this distract you from his quality though, in 32 games across domestic Spanish competitions the Uruguay international has amassed 24 goals and nine assists. Suarez has a tendency to step up his game when the situation demands and this leg could be the game in which the attacker finally hits European form in dramatic style 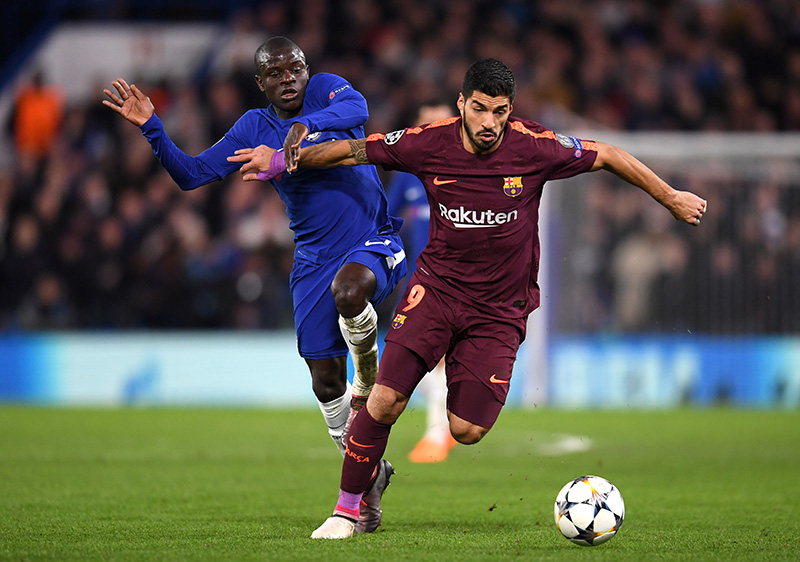 Luis Suarez is challenged by N’Golo Kante during the UEFA Champions League Round of 16 First Leg match between Chelsea FC and FC Barcelona at Stamford Bridge on February 20, 2018 in London, United Kingdom. (Photo by Mike Hewitt/Getty Images)

It was the Brazilian that set leg one alight, scoring one and hitting the woodwork twice he was unlucky not to net a UEFA Champions League hattrick. The striker has 13 goals and 10 assists from his 44 games this season. His contribution in this competition this season is impressive of the seven games the 29-year-old has played in  he has found the net on three occasions, whilst assisting a further three – he is one of Conte’s most trusted players. The striker is most at home with the ball at his feet, given space he can power through any back-line to devastating effect. 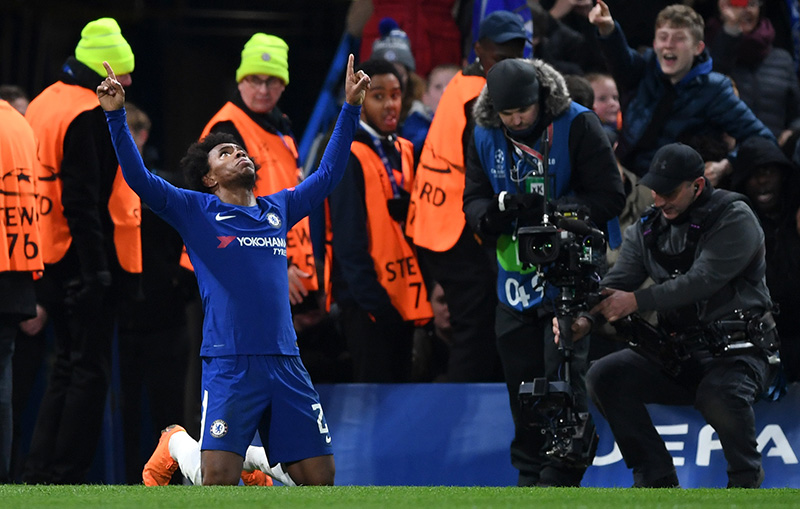 Willian celebrates after scoring his sides first goal during the UEFA Champions League Round of 16 First Leg match between Chelsea FC and FC Barcelona at Stamford Bridge on February 20, 2018 in London, United Kingdom. (Photo by Shaun Botterill/Getty Images,)