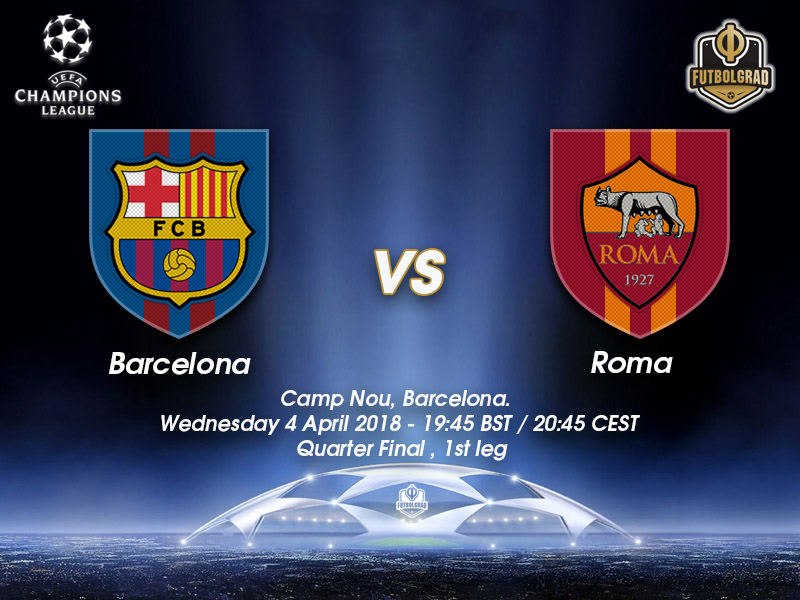 Barcelona vs Roma will take place at the Camp Nou in Barcelona.

After narrowly eliminating Shakhtar Donetsk in the round of 16 of the UEFA Champions League Roma were given an almost impossible task in quarterfinals in Barcelona. The club from Catalonia has been once again in fantastic form and had no problem eliminating English side Chelsea in the round of 16.

Barcelona, together with Real Madrid and Bayern München, are now among the favourites to win the Champions League in Kyiv this coming May. Coached by Ernesto Valverde Barcelona has somewhat reinvented itself after the departure of Neymar to PSG this summer. The Catalans signed Ousmane Dembélé from Dortmund and Paulinho from China to add both creativity and strength in midfield.

With just eight games left in La Liga Barcelona have a nine-point gap over their closest rival Atlético Madrid. But the game against Sevilla on the weekend highlighted that this Barca side is not as invincible as the side that dominated Europe under Pep Guardiola.

Sevilla’s performance on the weekend may bring some hope to Roma. The Italians play attractive football under head coach Eusebio di Francesco. Usually, lining up in a 4-3-3 formation Roma are, however, not quite as potent up front as they were last season when they had Mohamed Salah at their disposal.

As a result, Roma will be slightly more defensive trying to hit Barcelona on quick counter-attacks when playing on the road in Barcelona. The tactic worked well against Shakhtar, who at times play similar football to Barca, but the gulf in quality between Shakhtar and Barca is incredible, and Roma will likely find their master in the La Liga side.

Barcelona vs Roma – Players to Watch

Only few will argue that Lionel Messi is not the world’s best player. The 30-year-old Argentine once again is having a magnificent season having scored 25 goals and 12 assists in 28 La Liga games. Messi also added six goals and two assists in eight Champions League games. Playing more like a playmaker these days, his offensive numbers may have dropped somewhat, but Messi continues to score a goal every 98 minutes and even on an average day can singlehandedly dismantle the opposition.

Alisson Ramses Becker has quickly become Roma’s biggest star and among Europe’s most desired goalkeepers. The Brazilian keeper with German roots – he was born 25 years ago in Novo Hamburgo – at times plays like the clone of Manuel Neuer. A good shot stopper with fantastic anticipation when it comes to crosses Alisson almost acts like an extra playmaker at times.