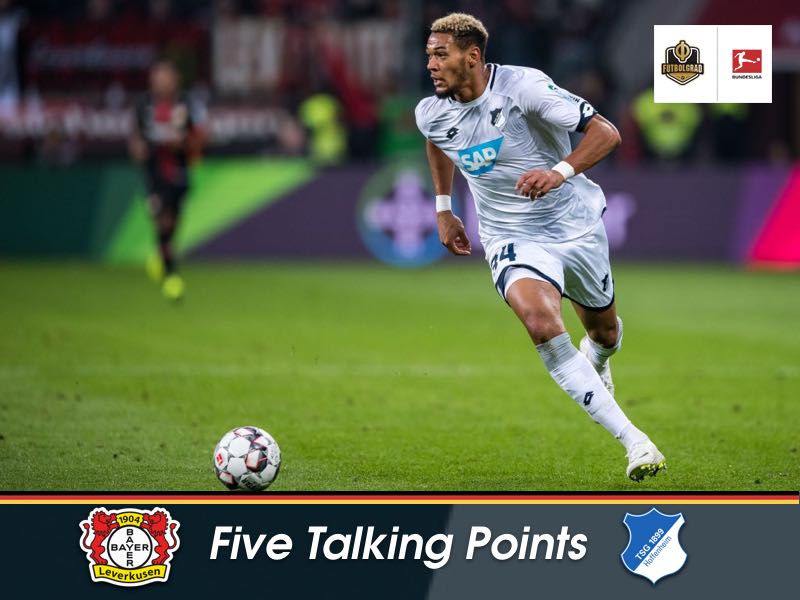 BayArena – Bayer Leverkusen v Hoffenheim ended 1-4, which means Hoffenheim have moved into the top six in the Bundesliga temporarily. Reiss Nelson put the visitors in front with a delicious strike before Karim Bellarabi squeezed home an equaliser from a tight angle.

Joelinton regained the lead for Hoffenheim with a fine header, winning a penalty from which Vincenzo Grifo made it 3-1 before finishing off a fast break to complete the rout.

Here are five talking points as Leverkusen crash back down to earth:

Both teams lined up with three central defenders, but Julian Nagelsmann gave Leverkusen the respect they deserved by starting Havard Nordveit and Florian Grillitsch in central midfield. Heiko Herrlich kept faith in the side that won 5-0 at Borussia Mönchengladbach in the DFB-Pokal with Kai Havertz next to Lars Bender in central midfield.

Leverkusen were intent on isolating Hoffenheim’s wide central defenders Kasim Adams and Kevin Akpoguma early on which was reaping the rewards. Julian Brandt and Karim Bellarabi were too quick on both flanks with the battle between Bellarabi and Akpoguma a particularly exciting affair.

Nagelsmann had to instruct Nico Schulz to drop deep and nullify Bellarabi’s threat, but it wasn’t enough to stop the winger equalising after some nice build-up play between Mitchell Weiser and Havertz. Bellarabi’s injury opened the door for Leon Bailey, but he didn’t have as much impact going forward.

Leverkusen understandably threw everything at Hoffenheim after going 3-1 down. The visitors were content to sit back and wait for counter-attacking opportunities, from which they made it 4-1 to put the result beyond doubt. It was another fine coaching performance from Nagelsmann who weathered the early storm to run out easy winners.

Bayer Leverkusen v Hoffenheim – Joelinton too big, too strong, too fast, too good

Joelinton has emerged as an indispensable player at Hoffenheim this season and left a significant impression on this match. The big Brazilian rose high and headed in a difficult chance to make it 2-1 after some fantastic play on the right wing between Kadarabek and Grillitsch.

He then broke free on a fast break, charging into the box before cutting inside Jonathan Tah which drew a clumsy foul from the central defender. Vincenzo Grifo made it 3-1 from the spot but Joelinton wasn’t finished. Another fast break from halfway, Joelinton made Tin Jedvaj look foolish before producing a fine finish past Hradecky to make it 4-1.

It was a deserved man of the match performance from the 22-year-old who made it four goals and an assist in his last three appearances. Joelinton’s all-round game, strength, speed and dribbling skills make a nightmare to defend, and his rapid ascent has been a blessing for Nagelsmann and Hoffenheim.

Reiss Nelson started his second consecutive match and was involved in most of Hoffenheim’s early attacking play. He got the end of a Nico Schulz cross with his header blocked before teeing up Florian Grillitsch who shot wide.

The 18-year-old wouldn’t have to wait long for another chance and took it with aplomb. Winning a corner that was taken short, Nelson unleashed a textbook curled effort that flew into the top corner giving Lukas Hradecky no chance.

The teenager’s goal celebration showed the confidence he is currently enjoying, cupping his ear towards the home supporters with no fear shown away from home. Nelson was withdrawn for Ishak Belfodil in the 64th minute, but there is little doubt the Arsenal loanee is going from strength to strength under Julian Nagelsmann and has forced his way into the first choice starting XI.

Karim Bellarabi came into this match full of confidence after scoring four goals in his previous three appearances. He wasted no time getting involved, latching onto Brandt’s through ball and easily beating Kevin Akpoguma for pace with his cross headed over by Lars Bender.

Akpoguma was having a terrible time early on, a poor pass and weak header going unpunished before conceding a free kick for a pull on Brandt from which Leverkusen had a goal ruled out for offside. The defender deservedly earned himself a yellow card in the 14th minute for a foul on Bellarabi who smelled blood in the water. 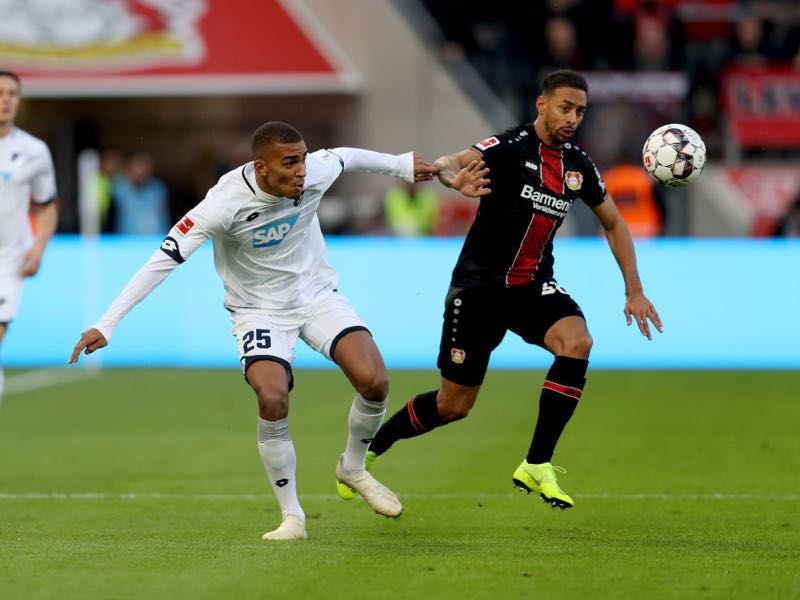 Camped on the right touchline waiting for opportunities, Bellarabi was equalised after beating Akpoguma once more and firing past Oliver Baumann from a tight angle. The winger injured himself after a long-range shot and was replaced by Leon Bailey before half-time, prematurely ending an intriguing one-v-one contest that was a joy to watch for anyone but Akpoguma.

Many thought Bayer Leverkusen had turned the corner after two impressive away victories. A breath taking performance at Werder Bremen in the Bundesliga resulted in a 6-2 victory which was followed by an incredible 5-0 win at Borussia Mönchengladbach in the DFB-Pokal.

This was always going to be a difficult match, and so it proved, but surely even the most sceptical Leverkusen supporters would have been shocked with a 4-1 home drubbing. The crowd fell silent after Grifo made it 3-1 and the absence of atmosphere became even more apparent when Joelinton sealed the deal.

Matches involving Bayer Leverkusen are thrilling affairs for neutral observers, but I feel for the Werkself supporters who are on a constant roller coaster. This result was another blow and additional proof of what this club currently are, an incredibly inconsistent side that are capable of convincing wins and incomprehensible defeats.