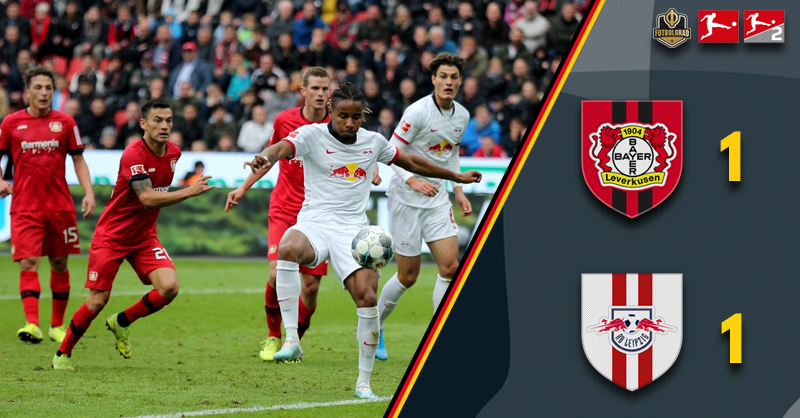 Bayer Leverkusen and Leipzig bounced back from European defeats in an exciting 1-1 draw at the BayArena. Kevin Volland poked home to give the Werkself the lead in the 66th minute, Christopher Nkunku equalising with a fine piece of skill in the 78th minute.

Chances came early with Kevin Volland releasing Nadiem Amiri, who was thwarted by Lukas Klostermann. Matheus Cunha broke clear at the other end with a great one-v-one chance saved by Lukas Hradecky.

Cunha turned provider as Timo Werner raced through on goal, his shot saved by Hradecky who was busy in the opening minutes. Sven Bender flashed a header over the bar before he failed to clear a long ball, Werner taking advantage but shooting horribly wide from a promising position.

Bayer Leverkusen were probing in dangerous areas without creating chances against Leipzig’s well-drilled defence. Emil Forsberg went through but couldn’t find Werner, who was in a great position to score.

Peter Bosz replaced Daley Sinkgraven with Wendell to start the second half and switched to a back three. The Brazilian played a risky back pass, but Cunha couldn’t capitalise, Julian Nagelsmann seeing enough from Timo Werner, who was replaced by Christopher Nkunku in the 59th minute.

Patrik Schick came on for Marcel Sabitzer minutes later as Leipzig attempted to shake things up. It didn’t have the desired effect as the hosts took the lead in the 66th minute.

Marcel Halstenberg shot over the bar before Poulsen, and Mitchell Weiser picked up yellow cards. Moussa Diaby replaced Karim Bellarabi, but once again, a substitution was quickly followed by a goal to the opposition.

Marcel Halstenberg’s cross found Nkunku, the Frenchman showing great skill, control, and composure to take beat Sven Bender and fire past Hradecky. Aranguiz was injured late on and had to be stretchered off, Leverkusen with the final chance as Volland collected a Kai Havertz through ball and forced a fine save from Peter Gulasci. 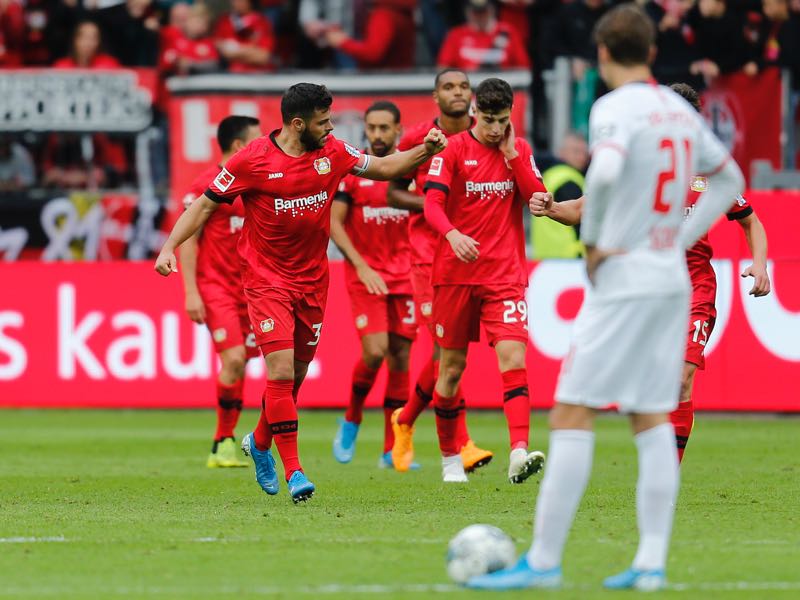 Volland continues to play at a consistently high level and is often involved in Leverkusen’s promising attacking sequences. Perhaps unlucky to miss out on Joachim Lowe’s squad but is indispensable to Peter Bosz.

Another player who always seems to be one of Leverkusen’s best, Aranguiz, is key to Bosz’s midfield and seems to open up all over the pitch. Played a vital role in Volland’s goal and hopefully won’t miss much game time after getting stretchered off the pitch.

Showed some silky skills and composure to take the ball past Sven Bender and finish past Hradecky for Leipzig’s equaliser. Nkunku was a shrewd signing and could be a sharp improver if Nagelsmann finds his best position and gives him regular playing time.