Bayer Leverkusen v Nürnberg — Bayer Leverkusen defeated Nürnberg 2-0 at the BayArena in a one-sided match that was rarely in doubt. Substitute Lucas Alario headed in a Julian Brandt corner over the line in the 61stminute before Alario teed up Kevin Volland who secured the win in the 86thminute.

The result sees the Werkself move back into 6thposition in the Bundesliga with Hoffenheim and Wolfsburg yet to play on Matchday 30.

Peter Bosz sprung a surprise early on as Leverkusen started with three at the back, Wendell tucking into the left side of the central defence. Kai Havertz was the first to have an attempt which was deflected over the bar as the hosts established their dominance.

Leon was playing as an attacking wing-back, attempting to fashion chances through intricate passing alongside the usual suspects Julian Brandt, Havertz and Kevin Volland. It seemed a matter of time before they took the lead, Charles Aranguiz playing a 1-2 with Mitchell Weiser and surging into the box but unable to get a shot away.

Eduard Löwen had Nürnberg’s first chance with a weak effort after some getting behind Weiser. Leverkusen resumed their dominance, however, Havertz cutting inside from the right edge and curling an effort towards Christian Mathenia who deflected the ball off the post.

Bailey went close to getting onto a Weiser cross before Nürnberg created another chance down their left wing. Lukas Hradecky intercepted a dangerous cross with Mikael Ishak next in line, the striker dribbling past Jonathan Tah before colliding with Sven Bender in the box.

Bailey shot got past Robert Bauer and shot at Mathenia before picking up an injury and replaced by Lucas Alario. Nürnberg were organised and were proving hard to break down with men behind the ball with the game goalless at half-time.

Bayer Leverkusen started the second half strong with Brandt playing in a higher position and instigating attacks. Nice interplay with Aranguiz forced an important challenge from Patrick Erras before Weiser’s shot from distance was parried wide by Mathenia.

Brandt blazed over from distance before a Jonathan Tah interception resulted in a four on four break with Volland’s cross deflected wide by Bauer. Tah headed over just before Leverkusen finally scored in the 61stminute.

Brandt’s corner was headed towards goal by Lucas Alario and cleared off the line by Tim Leibold, but the ball has narrowly crossed the line with the Werkself deservedly 1-0 in front.

Nürnberg manager Boris Schommers brought Virgil Misidjan on for Sebastian Kerk as Alario scuffed a shot at Mathenia. Havertz was next with a shot tipped away by Mathenia, Volland enjoying plenty of open space on the left wing before delivering a cross that was headed over by Tah from close range.

Matheus Pereira saw a rare Nürnberg shot deflected for a corner before switching from the right to left wing with Misidjan. Nürnberg’s best chance of the match would soon follow, Pereira and Leibold combining to tee up Eduard Löwen who shot wide from a great positon.

It wasn’t to be for the visitors; however, Bauer with a terrible turnover that was pounced on by Brandt. He raced clear and was fouled, but Alario was on hand to thread the ball through to Volland who steered his shot past Mathenia to secure all three points.

Julian Brandt was influential especially in the second half with Kevin Volland prominent, but Lucas Alario scored the first and assisted the second to be the man of the match. The Argentine striker has found playing time hard to come by recently but got his chance after Leon Bailey was injured in the first half and made it count. 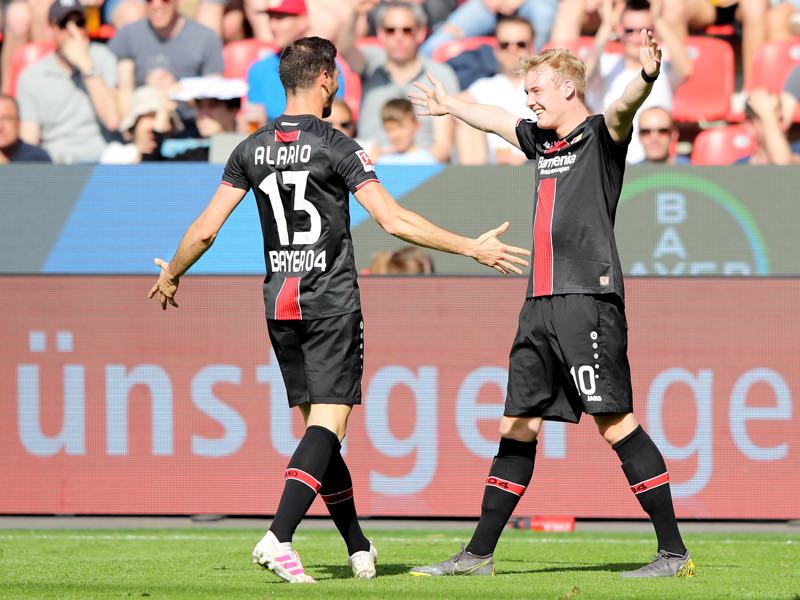 Bayer Leverkusen found it difficult to break through a well organised Nürnberg defence, but eventually, their superior quality and possession shone through. Peter Bosz’s side are still in the hunt for European football next season with four matches to play.

FT Bayer Leverkusen 2-0 Nürnberg. A match that was rarely in doubt despite the hosts taking the lead in the 61st minute and securing victory late on. pic.twitter.com/yALrF4HeOy