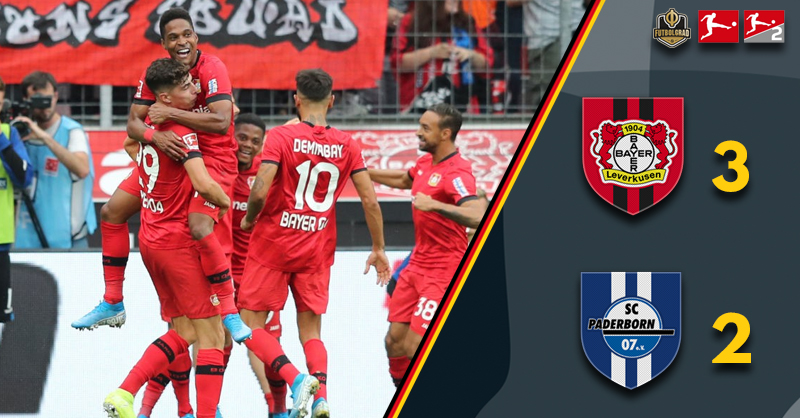 Bayer Leverkusen were keen to get on top early on, Leon Bailey heavily involved and creating a chance for Charles Aránguiz who fired wide. The Werkself didn’t have to wait long for another attempt, Lars Bender releasing Kevin Volland who cut inside Christian Strohdiek, the central defender playing Bailey onside who steered Volland’s shot into the net.

There had been warning signs at the other end of the pitch, however, and five minutes later it was 1-1. A loose pass from Julian Baumgartlinger was pounced on by Sven Michel, the striker breaking clear and holding off Jonathan Tah before a well-placed finish past Lukas Hradecky.

Leverkusen restored their lead in the 19th minute. Bailey was the instigator once again as the ball fell to Baumgartlinger, his pass piercing Paderborn’s defence and finding Kai Havertz who produced a composed chip over Jannik Huth. Once again the hosts squandered their lead.

Jamilu Collins released Christopher Antwi-Adjei down the left-wing, he had too much pace for Tah and found Michel who saw a shot blocked on the line by Wendell. It would have been a penalty but Streli Mamba was on hand to slam it home.

Leverkusen were overloading in the attack, creating numerical advantages in Paderborn’s half but couldn’t take advantage. They were fortunate not to go behind when Sebastian Vasiliadis freed Mohamed Dräger, his cross inches away from Mamba, Vasiliadis trying his luck moments later with a fierce shot tipped over by Hradecky.

Peter Bosz made a change at half time with Alexander Dragovic replacing Lars Bender who picked up a knock in the opening period. Baumgartlinger hadn’t learned his lesson with another stray pass, inviting a Paderborn counter-attack that came to nothing.

Cauly replaced Mamba for the visitors and Karim Bellarabi came on for Baumgartlinger. Bailey’s switch to the left-wing came close to reaping rewards, his cross met by Volland who headed wide.

Bayer Leverkusen took a 3-2 lead in the 69th minute, Havertz picking out Wendell who crossed to an unmarked Volland who had an easy finish. The home side were turning the screw with Havertz turning provider once more, this time Bailey shooting wide.

Paderborn had a half-chance when Antwi-Adjei shot straight at Hradecky but that would be their last meaningful attempt. Leverkusen had presentable opportunities to go two points clear but squandered each one. Bellarabi’s cross somehow evaded Havertz in point-blank range, Volland couldn’t find an unmarked Bellarabi and Bailey raced clear but was too casual in a 1 on 1 situation, perhaps thinking he was offside. 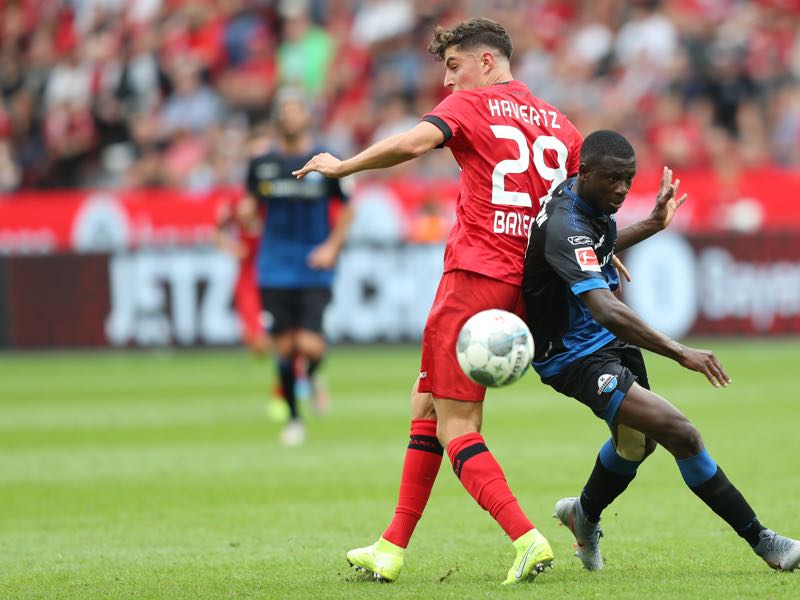 Bayer Leverkusen v Paderborn – Kai Havertz of Leverkusen and Jamilu Collins of Paderborn fight for the ball during the Bundesliga match between Bayer 04 Leverkusen and SC Paderborn 07 at BayArena on August 17, 2019 in Leverkusen, Germany. (Photo by Christof Koepsel/Bongarts/Getty Images)

A composed finish and often instigating dangerous Leverkusen attacks, Havertz was the standout player once again. Not sure how he missed Bellarabi’s cross, as that would have been his second goal and a more accurate reflection of his performance.

Did the hard work for Bailey’s opener and was a constant danger for Paderborn’s defence. Got the goal and could have had more than one assist on another day.

The central midfielder had a strong game in a box-to-box role, showing why he will be an important player for the newly-promoted club. Vasiliadis has a solid technique and an awareness that allows players around him to shine.