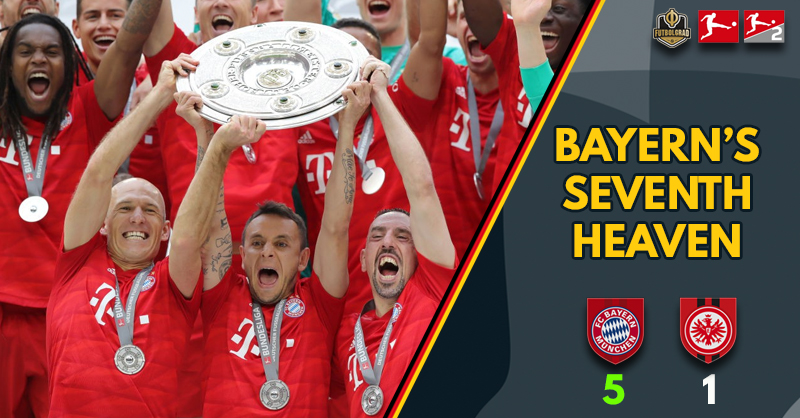 Seventh heaven as Bayern greats bow out in style

Bayern München vs Eintracht Frankfurt had all the ingredients to cause a final day upset. Could the Eagles qualify for the Champions League while spoiling the party for Franck Ribery and Arjen Robben? No, they couldn’t – and with it now comes a July start for Adi Hütter’s side in the Europa League.

Meanwhile, for Niko Kovac –  he’s added more ammunition to his claim that he was the right choice for Bayern as they make it seven in a row. 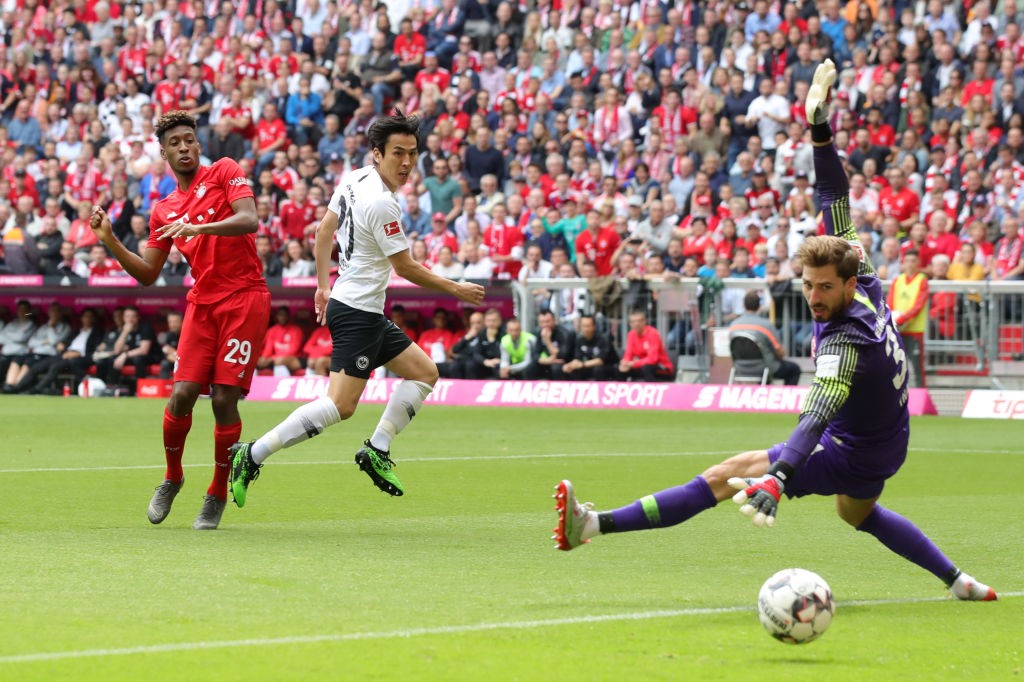 Bayern simply had to win, do so and their seventh straight Bundesliga title would be theirs – there was also the option to draw, but no one inside the Allianz saw that as an effective way to win the Meisterschale.

When Kingsley Coman slid home Bayern’s opener after four minutes the day never really looked to be under threat. In fact, by the tenth minute it could have – and probably should have – been three-nil to the Bavarians.

Serge Gnabry and Robert Lewandowski both missed golden opportunities to kill the game before it had really begun, and when Bayern did leak a goal, their dominance was restored almost instantly.

The champions only dropped nine points from the turn of the year, it was to be a run that ebbed away at Borussia Dortmund – eventually turning a nine-point deficit into a two-point advantage.

For a seemingly disappointing season, the end had a very familiar tale – the championship shield stays in München once again. 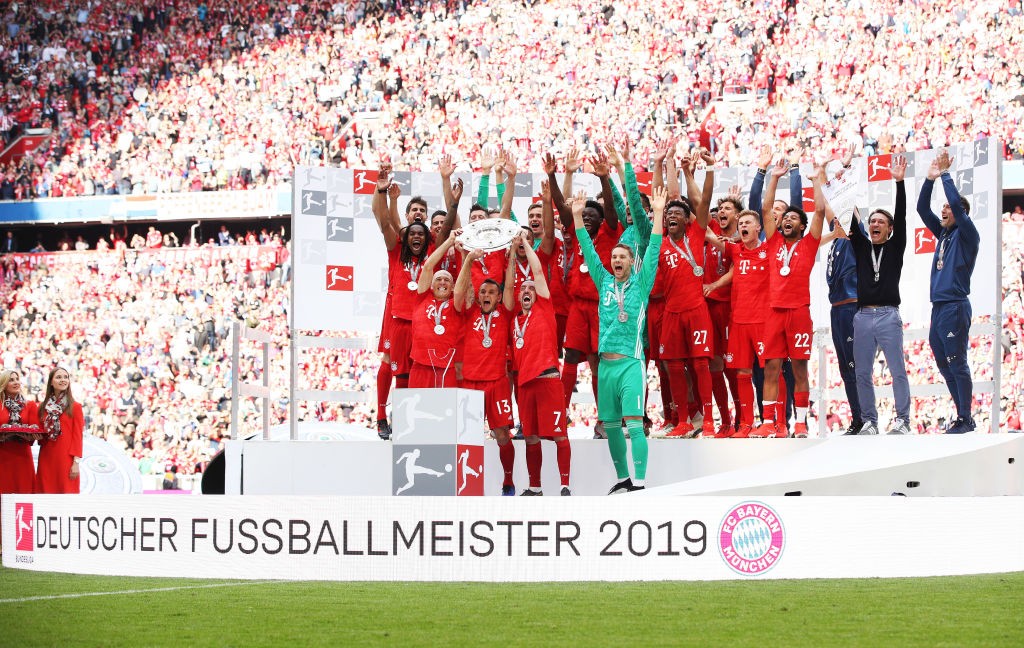 Bayern have been used to getting their own way in Germany of late – especially in the Bundesliga. A 21-point gap to second-placed Schalke last season followed a 14-point gap to Leipzig the campaign before. Go back even further and the gap to the Bundesliga runners-up is a familiar tale.

So when things ‘went wrong’ for Bayern this season (as in they drew a game, or – unthinkably – lost one) aspersions were cast onto new head coach Niko Kovac. Apparently only hired by half the Bayern board, the ex-Frankfurt coach was effectively on a slippery slope before a ball was even kicked.

Factor in a powerful dressing room (and an unwillingness for some to accept that their time had come to move on) and Kovac’s job became a political hot potato within the halls of Säbener Straße.

During the first half of the season, there were two distinct wobbles. A draw at home to Augsburg during Oktoberfest was followed by back-to-back defeats, then in November two draws bookended a defeat to Dortmund in the Westfalenstadion.

The Bavarians were as low as sixth in October and at one point they were nine points behind leaders Dortmund. However, when it really mattered Bayern kicked up a gear. Demolishing their title rivals 5-0 in April, they went on to pick up 14 points from the last 18 on offer.

Helped somewhat by Dortmund’s own wobble against Schalke and Werder, Kovac’s Bayern did enough to ensure their destiny was of their own making come Matchday 34.  It hadn’t been a perfect Bundesliga season, but the end result was all that mattered. 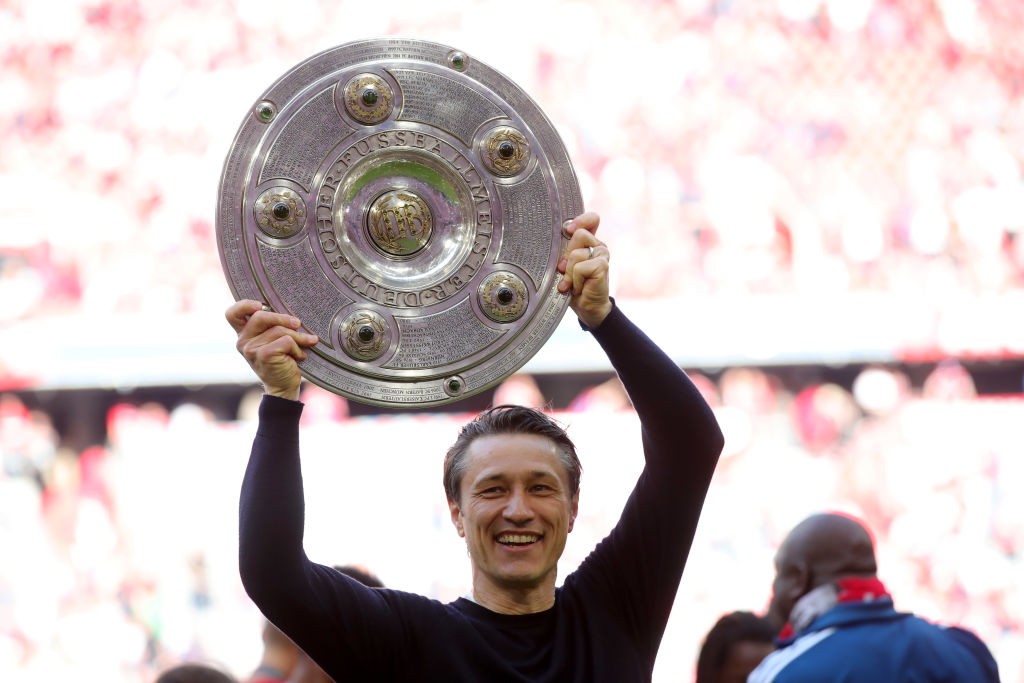 Unbelievably, even with the prospect of a league and cup double, there are still doubts as to whether Kovac remains the right man to take Bayern forward next season.

Big money has already been spent on bringing in new players for 2019/20, and that trend will likely extend by another €80 million now the transfer window can be kicked open. Kovac seems confident of keeping his role though:

“We’ve done great things, it was a great day for me personally – I’m very very happy, but we want more. I talk to my bosses, I have three. When you talk to each other, you know which way things are going – I think I interpreted it correctly” the Croatian said after fulltime.

But, the rumours around his future will continue to be stoked, “It’s not the right time to talk about it” Uli Hoeneß remarked after the game when asked about Kovac’s future.

What Kovac does have in his corner is one key statistic, one that marks him out as having ‘Bayern DNA’. Today he became only the second ex Bayern player – after Franz Beckenbauer – to win the Bundesliga as player and manager with the club.

Should a Pokal be delivered as well as the league championship, then discussions will centre on whether Kovac is the right coach for Bayern’s European ambitions.

Back-to-back semi-final appearances were followed by a Round of 16 exit this season to Liverpool. This is where Bayern want to improve, their 2013 success at Wembley now moves into its seventh year without a follow-up.

If Kovac stays or goes will surely revolve around one key question – can he deliver Europe’s top club prize?

Bayern München vs Eintracht Frankfurt: Goodbye to the greats 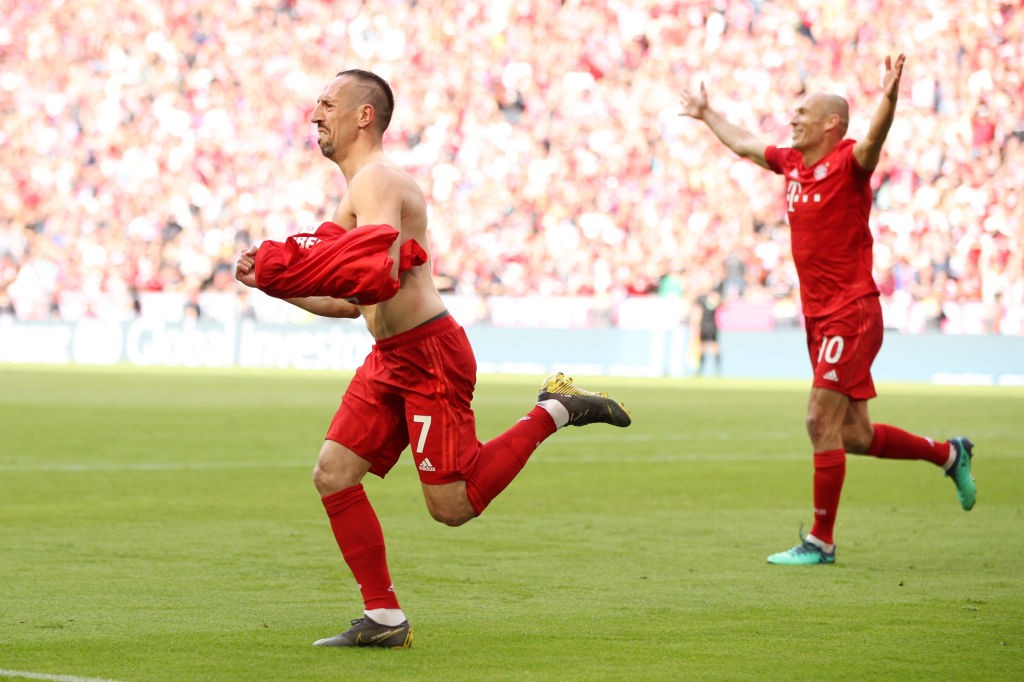 Problems aside, this title win has been the perfect send-off for three Bayern players, who will all go down as legends. Franck Ribery and Arjen Robben came off the bench to both score on an afternoon that will long be remembered.

Rafinha was due a goodbye, but an early injury to Leon Goretzka scuppered his chance of a late cameo – Renato Sanches was chosen to firm up the midfield when the game was still relatively close.

It was the Frenchman, Ribery, who came on first. Taking to the field in the 61st minute, he had his perfect ending just nine minutes later – a wonderful finish to a wonderful career.

The winger becomes the first player to win nine Bundesliga championships – all of them with Bayern. He also leaves the club having amassed 23 trophies over his 12-year spell, a record only equalled by the great Oliver Kahn.

Robben notched his 99th Bundesliga goal after being on the pitch for just 11 minutes, his strike on the 78th-minute a superb way in which to end his 10-year spell in Munich that will be remembered for many reasons, but ultimately one ‘that’ night in London – he isn’t referred to as ‘Mr Wembley’ for nothing.

How Bayern cope with the loss of three influential characters will be something to keep an eye on next season, but for now – the party will go on long into the night in celebration of their achievements whilst residents in Bavaria.