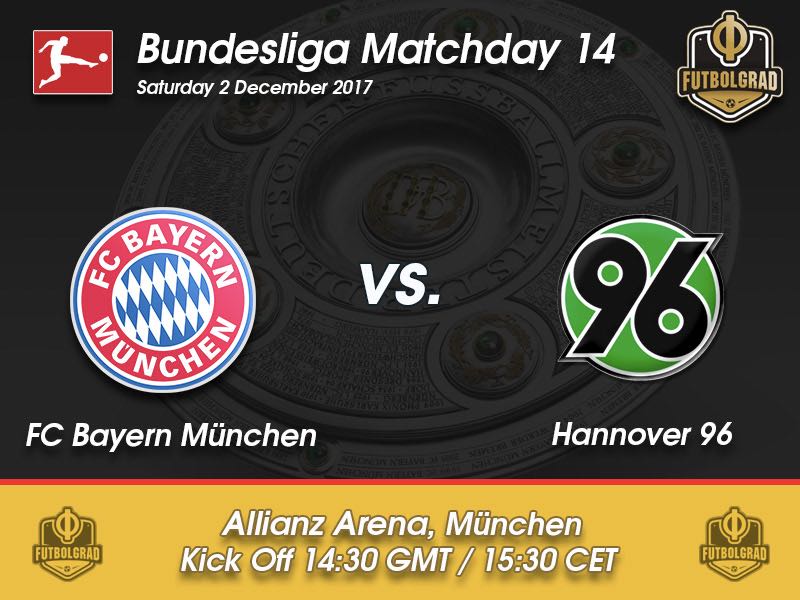 After losing to Borussia Mönchengladbach on matchday 13, Bayern München are looking to bounce straight back with a victory against newly promoted Hannover 96. Previously unbeaten in eight straight games under Jupp Heynckes Bayern, however, for the first time showed signs that they are no longer possess the dominance of recent years.

Ahead of the Gladbach game Bayern already struggled midweek in the Champions League against RSC Anderlecht. Although the Bavarians won that game, 2-1, Bayern looked lost at times. To make matters worse key players Arjen Robben and Thiago had to leave the game early and missed the game against Gladbach. Without the key players, Bayern struggled to get their wing play going and only challenged Gladbach in the second half effectively.

Hannover 96 in the meantime come off the back of a 1-1 draw against VfB Stuttgart. Die Roten started well into the Bundesliga season and even topped the league at some point. Injuries to Ihlas Bebou and Jonathas, however, have somewhat slowed the progress and H96 are currently tenth on the table. Given the drop in form, the game against Bayern comes at the possibly worst time. Hannover have not beaten Bayern since April 2011 and Bayern will be favourites to continue their perfect run against the visitors from Lower Saxony on Saturday.

Bayern München vs Hannover 96 – Players to look out for:

Thomas Müller will make his return on Saturday against Hannover 96. The forward has been fit for some time already, but head coach Jupp Heynckes opted to take his time with returning Müller to the starting formation to ensure that Müller will not suffer an injury setback. Müller has pushed for an earlier re-integration into the starting line-up and will, therefore, be highly motivated when the game kicks off on Saturday afternoon.

Thomas Müller will return to action on Saturday. (Photo by Alexander Hassenstein/Bongarts/Getty Images)

Salif Sané was the man of the match last Friday. Since the club’s relegation a year and a half ago the Senegalese defender has established himself as the club’s leader. A tall and strong defender Sané also has formidable technical skills and will be asked to keep together Hannover’s defence against a Bayern side that will come out in full force on Saturday to make their fans forget the recent defeat against Gladbach.

Salif Sané was the man of the match against Stuttgart. (Photo by Stuart Franklin/Bongarts/Getty Images)