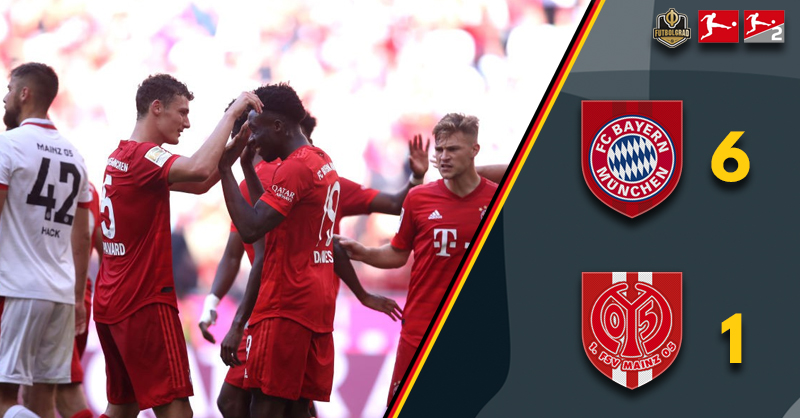 Although Bayern pressed from the start, it was Mainz, who took the early lead in the 5th minute. Ronael Pierre-Gabriel had to much room on the right, and his cross found Jean-Paul Boëtius wide open in the box allowing the central midfielder to head the ball past Manuel Neuer. Bayern finally had their first big opportunity in the 30th minute, Ivan Perišić, however, missed the wide open goal from just ten yards out. Just four minutes later Mainz keeper Florian Müller had to be on guard to produce a great diving save after a David Alaba free-kick. The goal was coming, and in the 37th minute, Benjamin Pavard beat Müller with a lovely volley to make it 1-1. Then just before halftime, Bayern made it 2-1 with Alaba curling home a beautiful freekick.

The floodgates now opened and within ten minutes of the second half, Perišić scored his first goal for Bayern with a header that bounced off the underside before crossing the line. Bayern were now in control, and in the 65th minute, Kingsley Coman scored with a tap in goal after a corner from the right. The Rekordmeister was now in complete control and had 72% possession. Then in 68th minute, Bayern head coach Niko Kovač brought on Alphonso Davies for Perišić, the young Canadian right away slotting in on the left-wing and the Canadian would leave his mark on the match. But first it was Lewandowski that would celebrate, the Pole had been the best player on the pitch and in the 79th minute finally had his goal. Then just two minutes later Davies tapped a ball across the line for Bayern’s sixth goal and final goal.

Robert Lewandowski might have only scored once, but the Polish striker was easily the best player on the pitch. The 31-year-old renewed his contract this week until 2023. On the pitch, he once again highlighted that he might be the only player in Bayern’s squad, who cannot be replaced. In the first half when Bayern struggled, Lewandowski dropped deep at times and almost played as a playmaker. His movement and ability to create space is perhaps second to none in world football, as is his goalscoring ability, which he demonstrated in the 79th minute.

Alphonso Davies came on in the 68th minute for Perišić. The Canadian right away slotted in on the left-wing, which is, without a doubt his best position. With Mainz falling apart Davies right away had an impact, making several dangerous runs the 18-year-old scored his second career Bundesliga goal in the 81st minute, adding further to Mainz’s mysery. Overall, it was perhaps the perfect game for Davies to come on, the winger needs playing time as a winger to refine his attacking game and in the 25 minutes tonight he showed that he has certainly put in the work this summer.

It was a wasted afternoon for Mainz in Munich. Perhaps the only player that was up to the task was Dutch attacking midfielder Boëtius. The 25-year-old was present at the centre of the park and used his physical presence to escape Pavard in the first half to score the opening goal.

It was not a convincing start by Bayern Munich in the first half. But individual mistakes by Mainz and an excellent Lewandowski allowed Bayern to work themselves into this very difficult game. Once Alaba scored the second goal, the floodgates opened, and Bayern were in complete control to get an expected three points against Mainz.