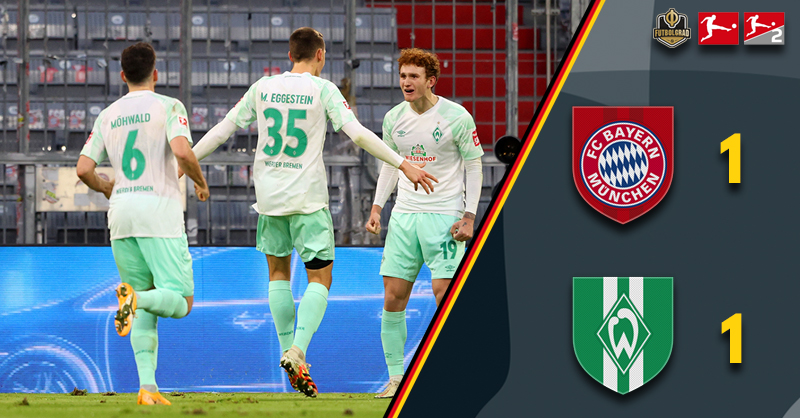 Manuel Neuer pulled off a string of quality saves as Werder Bremen outplayed the champions, on an afternoon where the Green and Whites should have returned north with all three points.

This fixture was once as big as Bayern versus Dortmund, Bremen had been Bayern’s bogey team. The Bavarians suffering 26 defeats to the green and whites, their most against any team in the Bundesliga.

However, that was all but ancient history, having won the last 22 competitive meetings by an aggregate scoreline of 76-14, Bayern’s 19 straight Bundesliga victories over Saturday’s guests is a record in a fixture.

Jamal Musiala was handed his first Bayern start, the Englishman with a couple of goals to his name already this season, and Hansi Flick rewarded the 17-year-old with a competitive home debut.

Vistors Bremen, may not have had history on their side, but it was Florian Kohfeldt’s men who started the brighter. The Werder coach was overseeing his 100th Bundesliga game, and the team from the banks of the Weser should have struck first with only 15 minutes on the clock.

Josh Sargent was denied by a superb stop by Manuel Neuer who then immediately jumped left to prevent Ludwig Augustinsson from smashing home the rebound. Television replays showed the left-back was just offside, but Neuer had no idea, his vision and ability were simply world-class.

The hosts looked jaded, and Bremen became far more dominant. Happy to play on the counter they were rewarded on the stroke of half time.

Maximilian Eggestein’s impulse shot left the imperious Neuer absolutely no chance—the vision from Sargent to create the opportunity was exactly why the American is rated so highly.

Last season, this fixture took a similar path—Bayern eventually won 6-1, should the same happen again there would have to be a step up in intensity and quality from the hosts come the second half.

As the second period got underway the visitors should have been two ahead, Milot Rashica found himself through on goal, but the forward dithered.

Unsure of whether to shoot with his left or pull the ball to his right, he did neither and David Alaba made a latch ditch stop to cut out what was, a tame effort on goal.

It was the type of opportunity the Kosovan normally eats up with ease, his lack of bite at the crucial moment let Bayern off the hook, and it was almost punished immediately.

Douglas Costa whipped in a ferocious shot from just outside the area, a slight deflection outfoxed Jiri Pavlenka but the crossbar kept Werder in the lead, just.

The midfielder had been the champions’ best outfield player since he was called upon as an early substitute, replacing Lucas Hernandez on 19 minutes.

Werder had ridden their luck, and Flick could sense it, a triple change just after the equalizer saw the hosts flex their muscles—on came Leroy Sané, Serge Gnabry, and Eric Maxim Choupo-Moting.

Bayern stepped up a gear but Werder refused to give way, creating their opportunities on the break they almost found a second on 79 minutes, Rashica tried his luck from distance but the ball curled wide at the last.

With 10 minutes remaining Sargent then twisted and turned the Bayern defense inside out, before Goretzka made a vital block on a goalward bound shot, the American was enjoying a wonderful afternoon in Munich.

Thwarted by Goretzka, Sargent was denied yet again by Neuer, with just three minutes remaining–the second goal just wouldn’t arrive for the visitors, or the Werder forward.

The first point for Kohfeldt against Bayern, but the Werder head-coach will leave Munich with the feeling it should have been all three. 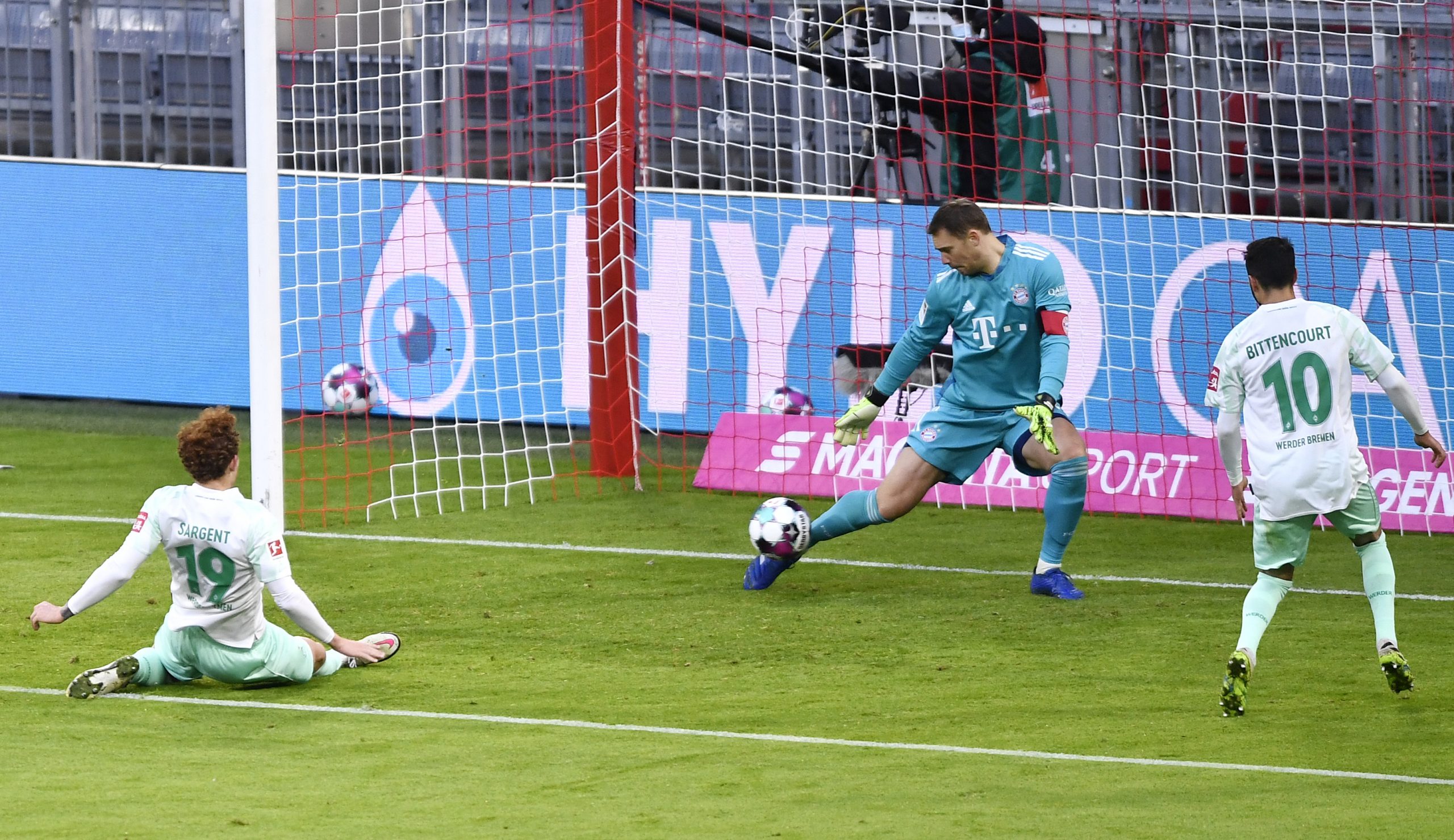 With four key saves, the champions had their goalkeeper to thank for a point, without him they would have lost all three. The right place at the right time, all of the time, has been Neuer’s career mantra, and yet again he was Mr. Relaiable as his outfield colleagues stuttered.

A wonderful assist saw the forward create Werder’s opening goal and Sargent remained a thorn in Bayern’s side all afternoon. His forward movement gave the visitors a constant threatening outlet.

The midfielder’s goal was one for the purists, a superb first-time finish that was placed in the only area that Neuer couldn’t reach. A rock in the center of the park that caused Bayern trouble all afternoon.

Subs: 19′ Goretzka for Hernandez, 63′ Choupo-Moting for Musiala, Gnabry for Coman, Sané for Costa.