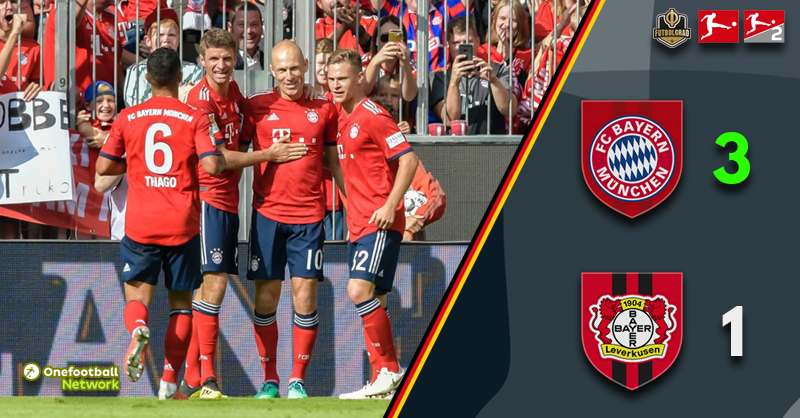 Bayern continue dominance with an easy victory over Leverkusen

It was a dream start for Bayer, albeit one after long deliberation. Given a penalty in the second minute after a Thiago handball in the area. After a long protest, Kevin Volland saw his penalty stopped by Manuel Neuer. But the drama continued as referee Tobias Welz had the penalty retaken, causing more protests, after too many Bayern players had run into the box too early. This time Wendell stepped up and scored the opener.

Bayern, however, were unimpressed and in the tenth minute managed to combine their way into Leverkusen’s area. Robert Lewandowski tanked his way into the box spotted Corentin Tolisso on the left and the French world champion curled the ball home to make it 1-1.

From there Bayern started to uncork Bayer Leverkusen. In the 20′ minute Jonathan Tah produced a poor clearance that fell right to Robben’s feet. The Dutch winger did not even stop the ball instead he beat Lukas Hradecky with a direct volley from 14-yards out to give Bayern the lead.

The question was how Bayer would react? Leverkusen went on damage control mode and at least managed to stop the flow of goals. But this was also due to Bayern losing Tolisso to, what looked like, a serious knee injury in the 39′ minute, which almost sucked the life out of the Allianz Arena and after the Frenchman was carried off the game trickled out towards the tea break.

A sense of deflation among both sides continued in the second half. Leverkusen seemed sluggish lacking any spark, Bayern, in the meantime, controlled the match with 74% possession but also went on cruise control lacking any creativity for the opening 20 minutes of the second half.

Heiko Herrlich then brought on Karim Bellarabi in the 73′. The hope was that the German national team player would add some pace to the side. Seven minutes later the 28-year-old made his impact on the match but not the kind that Bayer fans were hoping for – going in late on a challenge against Rafinha; referee Welz was given no choice sending Bellarabi off in the 80′ minute.

With a man-up, Bayern had the easy road to success. Dropping deep passing the ball around the Rekordmeister did nothing more than necessary ahead of what will be a busy schedule with six more games coming up in the next 20 days. Even in second gear, Bayern had enough to score a third. Robben on the right passed the ball into the box to Thiago, who in turn chipped the ball into the centre where James headed the ball home to make it 3-1 in the 90′ minute.

Thiago was the man of the match. After a summer of speculations linking Thiago with moves to various clubs all over Europe the Spaniard is enjoying life under Niko Kovac. The central midfielder was excellent throughout the match and not only assisted James goal but also played 127 accurate passes (93.4% pass completion), won 80% of his duels and completed three out of three dribbles. 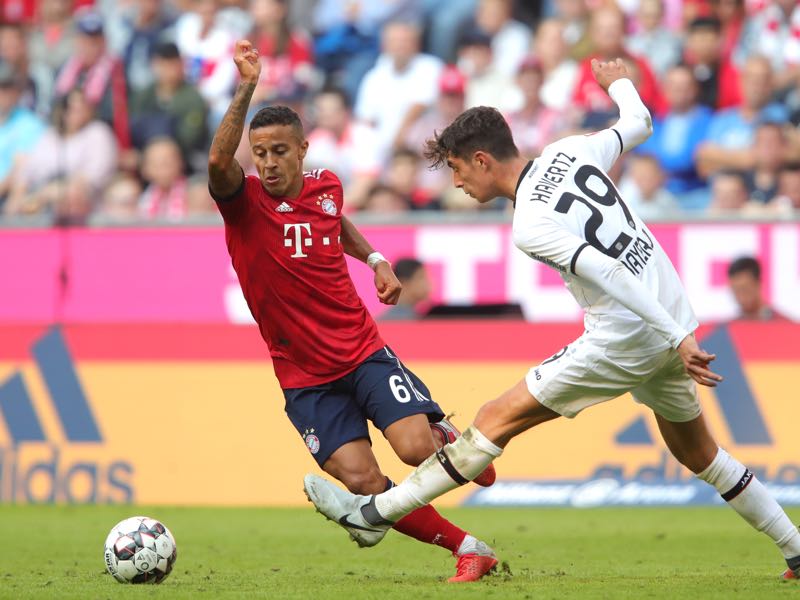 It was another sluggish performance by Bayer Leverkusen. Bayer CEO Rudi Völler said midweek that there should be no debate about the future of head coach Heiko Herrlich. But the head coach has now overseen Bayer’s worst start in Bundesliga history with perhaps one of the most talented squads ever assembled under the famous Bayer cross. With that in mind, do not be surprised if the debate on Herrlich’s future heads up during the upcoming week.