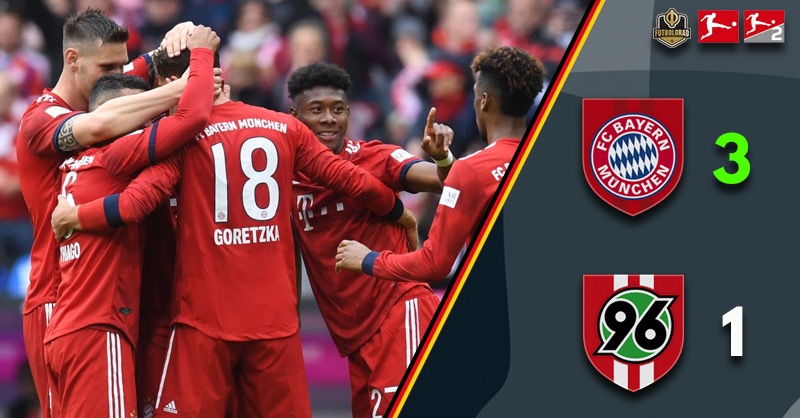 Bayern v Hannover 96 was a one-sided affair. Bayern were dominant at stages against Hannover, and although they experienced a small wobble at the start of the second half, ultimately Bayern dominated this match and were deserved winners.

It was, in fact, the underdogs that had the first chance of the game. In the 4′ Genki Haraguchi met a Linton Maina cross but the ball was just off the target.

It was an encouraging start for Hannover. But Bayern quickly took control and Hannover keeper Michael Esser had to produce a fine saves from a shot from Leon Goretzka (10′), a header from Kingsley Coman (12′) and a close-range effort from Thomas Müller (26′).

Bayern were dominant at this stage but could not find a way past Hannover’s defence until the 27′ minute. Joshua Kimmich delivered a perfect cross from the right, Robert Lewandowski swept in from the back of Hannover’s defence and headed the ball past Esser.

It could have been worse for Hannover, however, had it not been for goalkeeper Esser. The keeper kept Müller from scoring in the 35′ and then had to be on guard in the 37′ when Jérôme Boateng unleashed a shot from 20-yards out.

But in the 40′ Esser was powerless. Leon Goretzka was given to much room outside the box, and his shot beat the Hannover keeper to double Bayern’s lead.

It was all Bayern in the first half. But within five minutes of the second half, Hannover were given a lifeline. Jérôme Boateng blocked a ball with his elbow, and after a lengthy review, a penalty was given that Jonathas sent across the line. It was a contentious decision, but by the letter of the law, Christian Dingert had no other choice.

Soon after the goalscorer was sent off. Jonathas received a yellow card for getting into an altercation after the penalty was scored, then in the 54′ minute his arm hit Kimmich in the face, and the referee had no choice to sent off the Brazilian striker.

Hannover were down a goal and a man. Bayern started to push once again and Esser had to be on guard to keep out a David Alaba shot in the 69′ minute. But at the same time it was not all that convincing by the Rekordmeister at this stage.

Hence, heading into the final stages of this game it was still all to play for even if Bayern dominated the game. In the 85′ minute Frank Ribéry finally sealed it for the Rekordmeister. Dribbling in from the right he cut into the centre, and a low-curled shot beat Esser to make it 3-1.

It was pretty much the final action of the game. Bayern, in the end, were dominant and collected an easy three points.

Michael Esser was brilliant for Hannover 96, and the only reason the Reds from Hannover had a fighting chance in this game. In fact, no keeper has made more saves this season than the Hannover stopper. Today he stood on his head and despite conceding on three occasions was the man of the match. 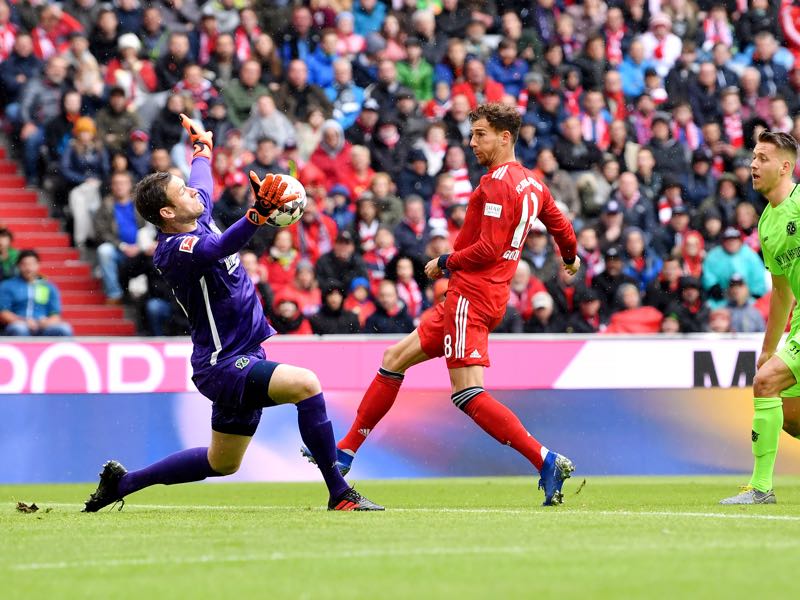 Hannover 96 v Bayern – Michael Esser of Hannover 96 makes a save from Leon Goretzka of Bayern Munich during the Bundesliga match between FC Bayern Muenchen and Hannover 96 at Allianz Arena on May 04, 2019 in Munich, Germany. (Photo by Sebastian Widmann/Bongarts/Getty Images)

Arjen Robben returned from a lengthy injury. The Dutchman will leave the club at the end of the season, and there was fear that he might never play for his club again. But today he made his comeback and will now be granted the sort of exit a legend like him deserves.