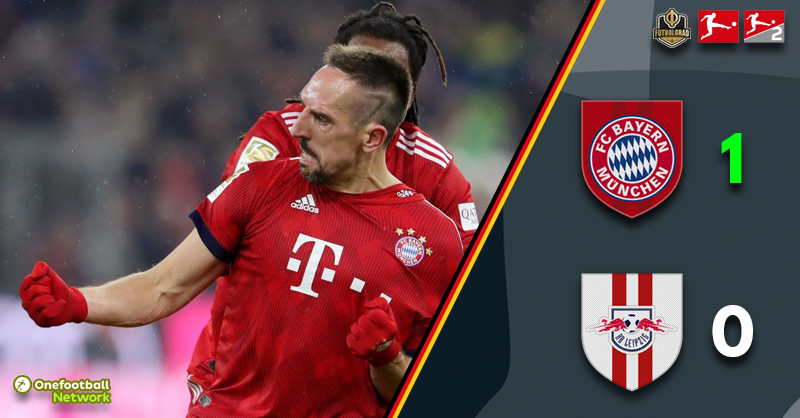 Bayern v Leipzig saw a return of the title race in earnest. The Bavarians made the best of Dortmund’s slip against Fortuna Düsseldorf collecting all three points in what was a cagey affair against RB Leipzig.

Bayern took the initiative straight from the kickoff. The first chance came within the first four minutes after Peter Gulacsi struggled with a freekick cross from Joshua Kimmich that caused some trouble inside Leipzig’s box.

It was an early moment of confusion for Leipzig. But die Roten Bullen then managed to settle the game, and by the 20-minute mark, it was a balanced game. It was almost a bit like trench warfare at this point with both sides carefully probing to find an opening in the other side’s defence.

That first opening appeared in the 22′ minute when Leipzig broke forward with numbers, and Bruma managed to curl an effort from the edge of the box. But Manuel Neuer, criticised in recent weeks, was aware and held onto the ball after a wonderful dive to the left.

Bayern going the other way had their biggest chance in the 24′ minute. Serge Gnabry spotted Robert Lewandowski wide open in the centre, and the Polish forward only had Gulacsi to beat, the Hungarian keeper got a hand on the ball from where it hit the inside of the post and then rolled across the goalmouth and out.

Shortly after Bayern suffered a big setback, Gnabry holding his groin had to be brought off in the 29′ minute with Frank Ribéry coming on to replace him. The injury took the momentum from Bayern’s attack for a few moments with Leipzig producing two quick opportunities.

In the 35′ minute Lukas Klostermann broke into the box with Niklas Süle having to risk it all clearing the ball over the bar from close range. Dayot Upamecano then hit the crossbar with a thundering header from the ensuing corner. It was the final chance of the first half in what was at times a cagey affair.

Right off the kickoff in the 47′ minute, Timo Werner produced the first chance of the second interval. The forward was given to much space just outside his box, but his shot zipped over the crossbar in what was a led off for Neuer. Leipzig was then left off the hook in the 56′ minute after both Müller and Lewandowski failed to get on the end of a low Kingsley Coman cross.

It was Coman’s last action on the pitch as the Frenchman was surprisingly taken off in favour of holding midfielder Renato Sanches in the 61′ minute. With that substitution, Bayern voluntarily sacrificed pace on the flank in favour of more presence at the centre of the park.

With Ribéry and Renato Sanches pressing more in the centre the fullbacks had to press up and in the 74′ minute Bayern finally worked that space. David Alaba moved forward and played a fantastic cross in the centre where Müller got a toe on the ball but the ball skipped past the far post.

Bayern also had the next chance in the 77′ minute. Gulacsi produced another mistake after a freekick flopping the ball straight to Süle but the defender was almost surprised by the chance and hit the ball over the crossbar. Just two minutes later in the 79′ minute Gulacsi, however, highlighted that he can be a great keeper when he made a fantastic stop from a close-range Kimmich header.

In the 83′ minute, Bayern’s goal finally arrived. Renato Sanches muscled the ball into the box, his shot was stopped by Gulacsi, but Upamecano’s shocking clearance fell to Ribéry’s feet, and the Frenchman made no mistake to score with a close-range shot.

On balance it was a deserved lead by the Bavarians and while Leipzig tried to push for the equaliser never could get back into the match. But there was still drama as Stefan Ilsanker, who was only brought on in the 81′ minute, was sent off with a straight red card after a horrendous tackle against Thiago. Following the tackle, Renato Sanches was also sent off with a second-yellow after rushing in throwing Ilsanker to the ground.

Thiago Alcantara almost had his leg taken off on that final minute tackle by Stefan Ilsanker. Thankfully for Bayern the Spaniard survived the challenge without an injury. Losing him at this stage would have been a massive blow for the Bavarians as the Spaniard delivered another impressive performance on Wednesday night. The midfielder managed to complete 89 passes (90.8% pass completion) and won 13 of his 17 duels to keep together Bayern’s midfield against an RB Leipzig side that was trying to push forward whenever they won the ball. 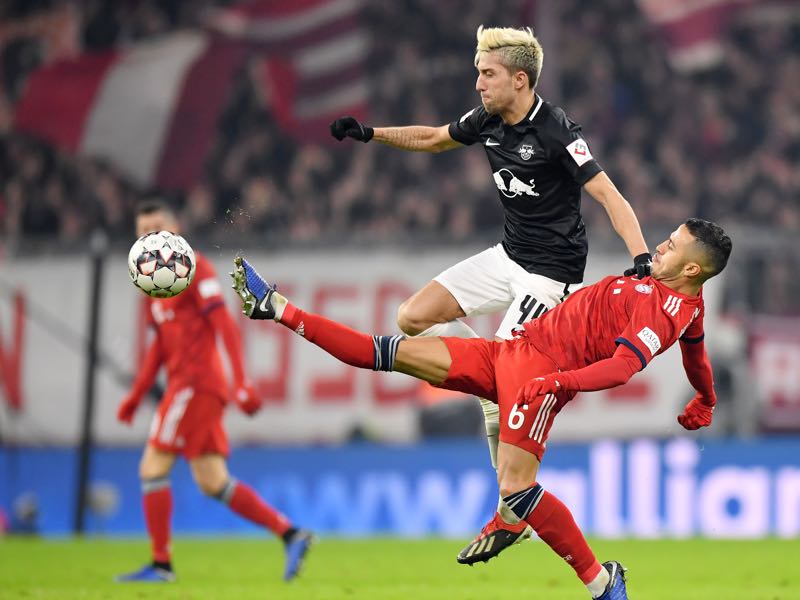 Have Bayern turned the corner? The result against RB Leipzig certainly suggests that Bayern are back on track and by closing the gap to just six points to league leaders Dortmund are asking questions at just the right time. But at the same time, this was a match on a knife-edge that could have also gone the other way.