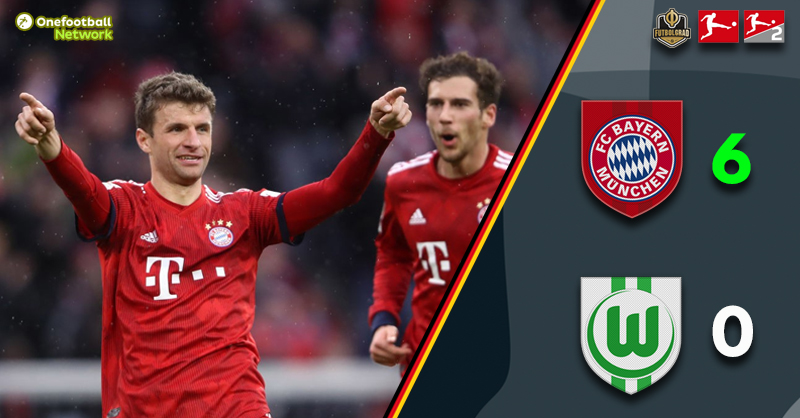 Bayern with an act of defiance as they destroy Wolfsburg

An early mistake by Manuel Neuer almost led to the opening goal in the third minute. Playing the ball out of the back Neuer hit the ball to Wout Weghorst, the Dutch striker was almost as surprised as the Bayern defence and a poor second touch meant that Bayern’s defence could react quickly.

That particular incident set the scene for what was a bit of a nervy start by both sides. Like Liverpool and Hertha before them, Wolfsburg tried to force an early mistake by pressuring Bayern deep in their half. That, in theory, should have allowed Bayern to hit Wolfsburg on the counter but Bayern lacked consequence when going on the attack in the first half of the first interval.

In the 34′ minute the deadlock was finally broken. Thomas Müller played a low ball from the right into the box where Serge Gnabry was one step faster than Wolfsburg’s defence to tap the ball across the line to give the Rekordmeister the lead. Two minutes later Gnabry was at it again. The attacking midfielder broke the offside pass after a great pass by James, broke into the box and squared the ball for Lewandowski and the Polish striker easily tapped the ball past Casteels.

Kovac wanted an act of defiance from his side following Löw’s decision and got exactly that as Bayern were clinically efficient in the first half. Clinical efficiency that continued in the second half with James adding the third goal in the 53′ minute with a great shot from the edge after a great assist by Thiago.

That goal put Bayern in complete control. The Rekordmeister was now toying with the Autostädter, who seemed completely lost at this stage of the game. Further chances followed, Müller, as well as Leon Goretzka, tested Casteels in a double chance in the 67, Jérôme Boateng saw a shot go over the crossbar in the 68′ minute.

In the 76′ minute, Bayern got their fourth with Thomas Müller getting on the scoresheet. Ribéry made a deep run on the left, played the ball back to Renato Sanches, who played the ball to the edge of the box where Müller managed to backheel the ball into the box from 18-yards out.

Not that Bayern were done there yet. In the 83′ minute, Joshua Kimmich added a fifth with a close-range finish and in the 85′ minute, Lewandowski scored Bayern’s sixth with a fantastic finish from inside the box. Kovac wanted an act of defiance from his Bayern side and got exactly that as the Rekordmeister was celebrating champagne football in the second half to shoot the lights out against a Wolfsburg side that never seemed up to the task after the first goal went in.

Robert Lewandowski had another field day against Wolfsburg. Although he did not repeat his five-goal trick from four years ago his two goals, today were enough today to break the Wolves’ back. The Polish striker has now scored 16 goals in the last eight games against Wolfsburg.

Bayern München reacted well to Joachim Löw’s decision to no longer nominate Müller, Hummels and Boateng. The Rekordmeister, in fact, was clinical at times completely dominating the Wolves and took the top of the table from Dortmund thanks to the better goal differential. A remarkable turnaround given that on February 2, Bayern were seven points behind BVB. It is a great sign of strength ahead of the must-win game against Liverpool.