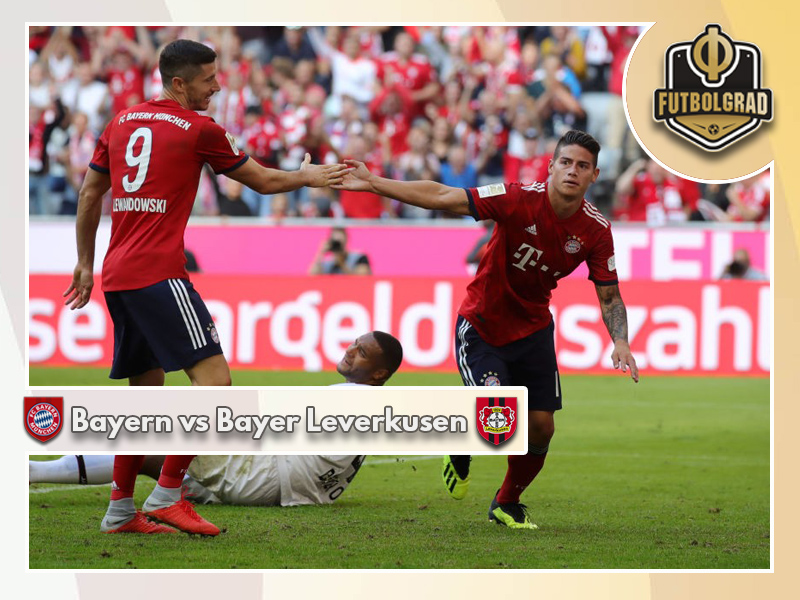 Bayern vs Bayer was the battle of Saturday afternoon – unsurprisingly it was the side from München that strolled to victory, this after they fell behind with just five minutes played. Regardless of the final scoreline this fixture showed a mentality that the Leverkusen club must shake off, quickly.

Bayern München do make mistakes in the Bundesliga (occasionally)

Yes you did read that sub-headline correctly, occasionally – and I must admit, only occasionally Bayern do make the odd mistake. It might be a rare collectors item but it definitely happens and we saw an instance very early on during this fixture.

Leverkusen came out of the blocks flying, for the first 10 minutes they were easily the better side – as we’ll discuss later on, a football match lasts 90 minutes not 10 and there began their undoing. However, for those initial opening minutes Die Werkself pushed the champions back, and they looked rattled.

The penalty on two minutes (five by the time VAR and a retake was signaled) was the culmination of Bayern’s early mistakes as well as a lack of concentration. As Wendell’s spot kick hit the back of the net, the Bavarians only had themselves to blame.

Thiago conceded a penalty for handball but the original mix up in the box that culminated with Kevin Volland hitting the floor was very ‘unBayern’ like – hope for others? Maybe not, expect Kovac to nail down those early errors.

Corentin Tolisso could be out for some time

Knee injuries can be career ending, and Tolisso looked in some pain as he lay on the Allianz turf. Hobbling off with physio assistance the French midfielder was evidently not in a good way. 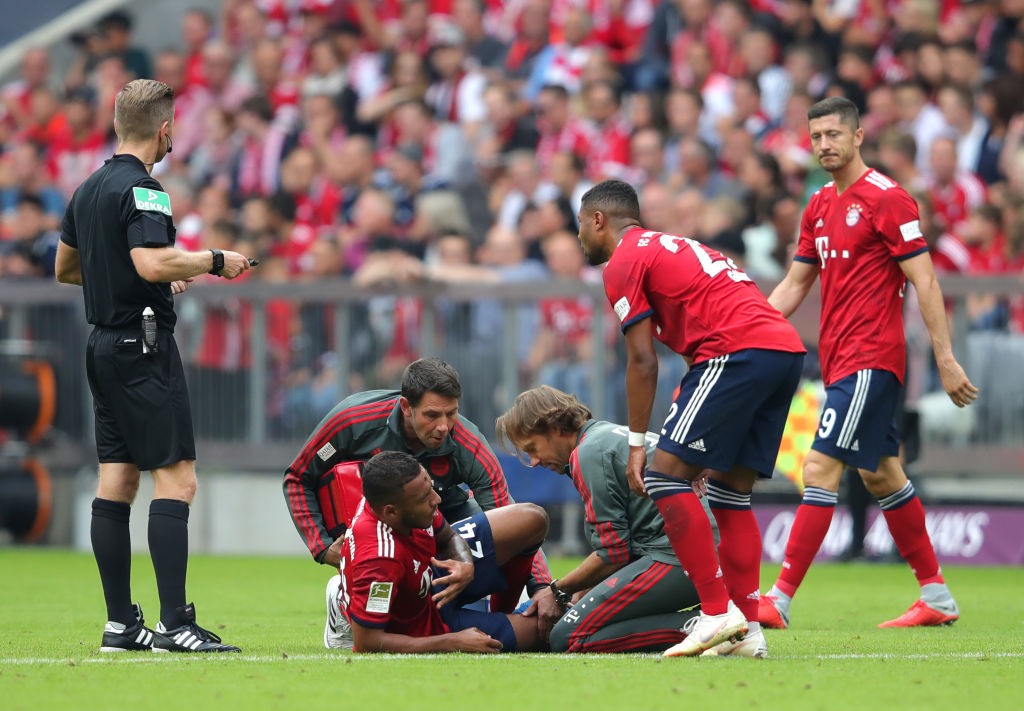 Corentin Tolisso goes down injured during the Bundesliga match – Bayern vs Bayer – at the Allianz Arena. (Photo by Alexander Hassenstein/Bongarts/Getty Images)

It was an innocuous looking challenge with Volland, but his right knee hyper-extended as it twisted in on itself. The fact he left the stadium on crutches gives an indication that Bayern will be after a scan on the injured area either this weekend, or first thing Monday at the latest.

While James came on – and will provide strength in depth – this is the last thing Kovac needs with Champions League fixtures on the horizon. Tolisso’s absence could be as short as 10 days, likewise any ligament damage could see the player out until the Rückrunde.

Should Julian Brandt have started this Bayern vs Bayer fixture?

The new German National Team number 10 was a surprise absence at kick off. Whether Heiko Herrlich had hoped to rest his star midfielder after his exploits with Joachim Löw remains to be seen, but by the time Brandt was introduced Leverkusen had fallen behind. 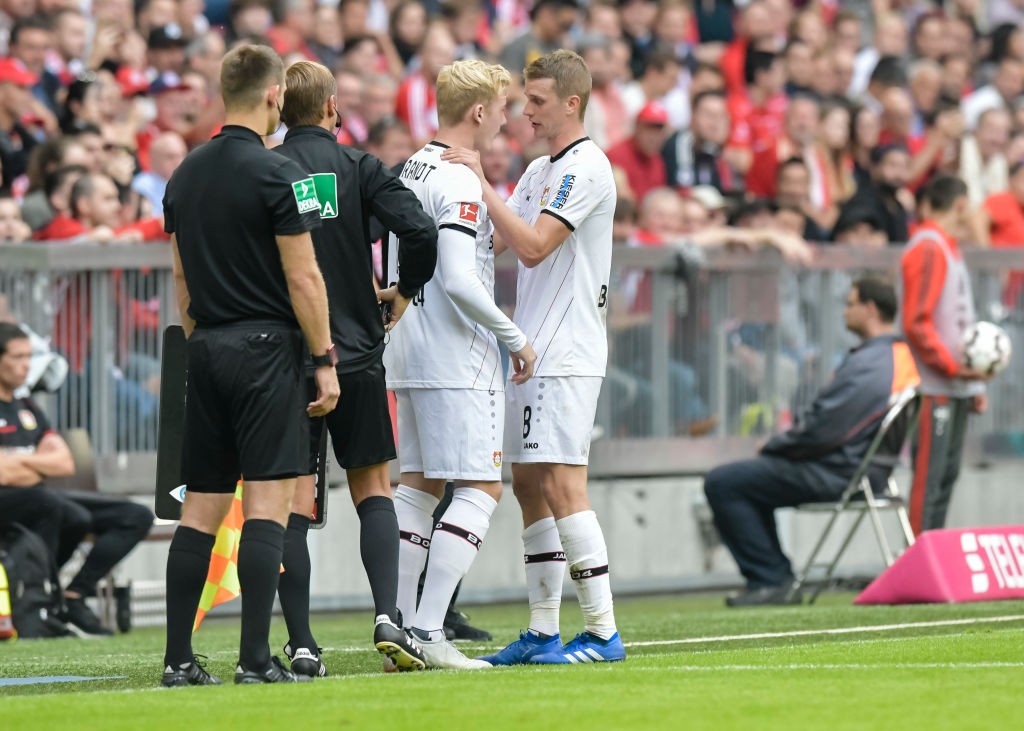 Lars Bender was chosen to start on the left side of midfield, not one of his strongest positions – the 29-year-old is more at home in a central or defensive midfield position. After the way in which Brandt has started the season it was perhaps a strange decision to leave him out of the starting XI.

Would Brandt have made the difference from the off? On this occasion maybe not, as we’ll cover next – Leverkusen looked like a team who didn’t really have a plan.

It’s rare for a side to take the lead in Munich, especially after five minutes – but when that does happen you don’t expect an almost instant implosion.  For some reason this is exactly what Leverkusen did, as if the goal surprised them and somehow disrupted their game plan.

You would expect a side that pushed Bayern back to really hammer home any advantage gained – however, this was the opposite for Leverkusen. The goal immediately led them to take their foot off the gas and sit back, probably the worst thing you can do against a Bayern side.

Herrlich has some wonderful attacking players at his disposal. It was though, a number of mistakes at the back that allowed Bayern to overturn the score quickly. Once Bayern had the foothold their early play lacked, Leverkusen looked devoid of ideas – should they wish to recover this situation they will will need to find an alternative to five defenders and five attackers outfield. They must find a linchpin in the middle to sew both front and back together.

Arjen Robben rolled back the years

How many times do we hear that Bayern need to focus on the future, bring in some youth and plan for the end of this current crop of golden generation players? However, the more we hear the more the ‘old-timers’ just keep performing.

Arjen Robben apologies to the Bayern fans behind the goal for missing a trade mark shot against Bayer Leverkusen. (Bayern vs Bayer – Photo by Alexander Hassenstein/Bongarts/Getty Images)

Today it was Arjen Robben who rolled back the years, scoring a wonderful volley the 34-year-old then should have really bagged himself another two goals. At one point he even apologised to the crowd behind the goal for missing a trademark left footed curler.

The Dutch winger has amassed a remarkable 97 goals in 192 Bundesliga games, when the day comes for Robben to retire whoever is asked to take his place will have exceptionally big boots to fill.