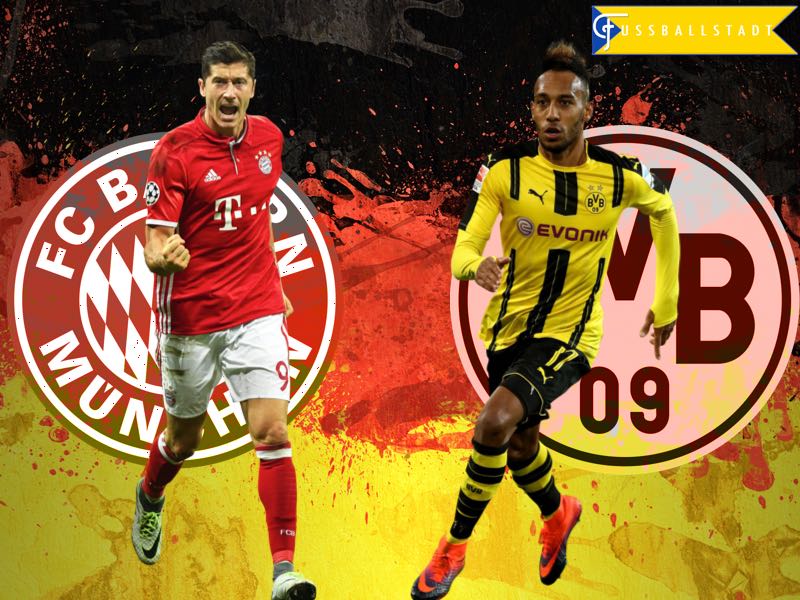 There is no bigger match in Europe this weekend than the Bundesliga’s Klassiker. Bayern München will host BVB in the 114th fixture between these two big rivals, the 95th matchup in the Bundesliga. Bayern hold the historical edge, having won almost twice as many as their Westfalen region opponents. However, Die Schwarzgelben hold bragging rights from the victory gained the last time these two big clubs faced off – Matchday 11 when Dortmund edged a tight fixture 1:0.

Bayern München overcame mid-season jitters to hit a tremendous vein of form just when it counted. A defeat to BVB in the first Klassiker of the season saw Bayern relinquish the Bundesliga top slot to newly promoted RB Leipzig. It was to prove a turning point for Carlo Ancelotti’s men. Sixteen matchdays then separated the defeat to Dortmund and their next loss of three points—Matchday 27 against Hoffenheim. During that spell Die Bayern picked up an unbelievable 41 points from the 48 on offer, a run which put clear daylight between themselves and second place Leipzig with 10 points. Bayern look almost certain to land their 27th Meisterschale come late May. An 8:0 thrashing of Hamburg and a 6:0 demolition of Mainz came on either side of a 10-goal destruction of English side FC Arsenal, in the UEFA Champions League. When it comes to scoring goals, Bayern have had few problems this season, at home or away. Accusations of a ‘boring’ almost ‘safe style of football’ under Ancelotti, earlier on in the season, has given way to an attacking prowess that has captivated all who have watched it. Even a 1:0 defeat during the midweek Matchday, MD 27, will not dampen Bayern’s high spirits. Flying high at the top of the Bundesliga and facing both Dortmund and Real Madrid in the space of a week should not faze this giant of a club in championship-winning form.

Borussia Dortmund’s biggest strength has also been their underlying weakness at times this season. After experiencing a departure of talent last summer, they have had to rely on a heavy mix of youth along with a smattering of experience during this campaign. Their free-flowing attack, exquisite at times, has unfortunately been tempered with an inability to either finish games off or to see them out. A higher than expected number of draws has been peppered with unforeseen defeats. Darmstadt and Hertha Berlin are prime examples of matches in which the more fancied Dortmund have found themselves on the wrong end of a score line. However, Tuchel’s men have provided us with some scintillating performances this season. Die Schwarzgelben have hit three or more goals this season on nine occasions, most notably in September when they recorded 14 goals in 270 minutes of football. Big victories against Darmstadt at home, Hamburg away, and Gladbach at home, all paled into the background when they destroyed Bayer Leverkusen 6:2 on Matchday 23 in a fixture that wouldn’t have flattered the Yellow and Blacks if the score line had been 10 or more goals. Like their hosts, this Klassiker comes before an all-important Champions League Quarter Final first leg fixture against Monaco, so Tuchel will have to manage his squad carefully. Dortmund do, however, have the current Torjägerkanone front runner in their ranks and they will look to Aubameyang to fire them to a first Bundesliga double over Bayern since 2012.

Bayern vs Borussia Dortmund – Players to look out for:

Lewandowski currently sits on 103 goals in all competitions for Bayern Munich which is exactly the number of goals he scored for Dortmund before his move in 2014. So far this season, he has again been in devastating form—27 Bundesliga matches have yielded 24 goals, a goal every 94 minutes. The Polish international has already registered three hat-tricks this season with the last coming seven days ago against FC Augsburg on Matchday 26. ‘Lewy’ is well known to his opponents and his ability to finish from distance, or close in, will be a significant threat to Dortmund on Saturday. Lewandowski hasn’t gone more than one game without scoring since the start of the Rückrunde, having not scored during the last matchday, a defeat to Hoffenheim, the form guide will suggest he will score again in der Klassiker.

Aubameyang is the only player in the Bundesliga who can better Lewandowski’s scoring rate this season and, undoubtedly, Dortmund will look to him to spearhead their Klassiker attack on Saturday evening. With an astonishing 25 goals in 25 games the Gabonese national captain has managed a goal every 88 minutes over this season’s Bundesliga. What makes this even more incredible is the fact that ‘Auba’ has scored eight goals in his last six matches, and it wouldn’t be unreasonable to suggest that number could have been even higher. Recent performances will show over one goal per game, and Aubameyang has the opportunity to take his tally over the 30-goal mark. As it is, the prolific striker currently sits at the head of the Torjägerkanone battle and looks like the favorite to land his first kanone come May.