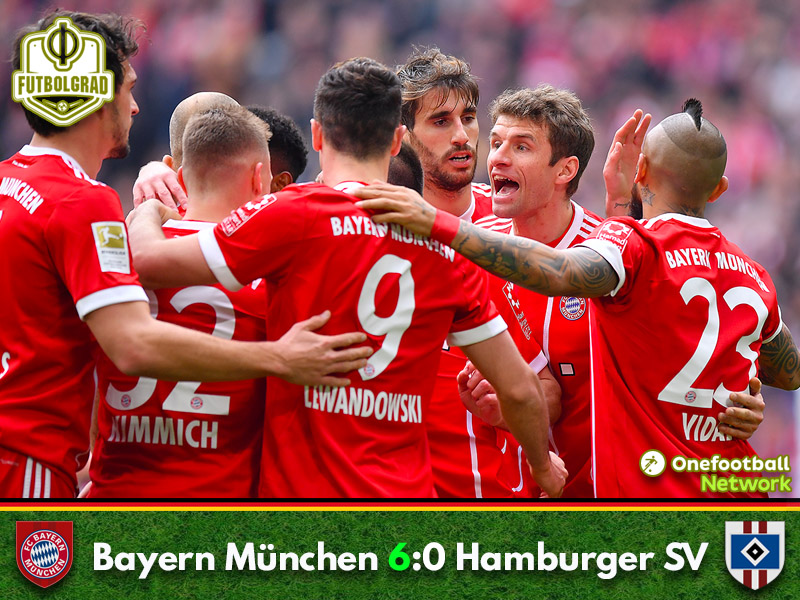 Bayern vs Hamburg ended with another heavy beating for die Rothosen as Bayern dominated the game recording an easy 6-0 victory over the team from the Hansestadt.

Hamburg have always struggled in Munich, and as expected it would be an uncomfortable afternoon for die Rothosen in the Bavarian capital with Frank Ribéry taking an early lead in the eighth minute. The Frenchman dribbled through Hamburg’s defence and rounded keeper Christian Mathenia to slot the ball home. Bayern were not done there to start the match with Robert Lewandowski scoring two goals within six minutes heading home a Joshua Kimmich cross in the 12th minute and taping home a David Alaba cross inside the six-yard box in the 18th minute.

HSV head coach Bernd Hollerbach reacted in the 24th minute taking off Denis Diekmeier to bring on Vasilije Janjicic. For a few minutes, the change seemed to stem the flow of goals with Bayern toying with die Rothosen passing the ball around the box at will looking for an opening without finding one before the end of the first half. Going into halftime, Hamburg must have felt fortunate that the scoreline was just 3-0.

The question going into the second half was would Bayern take it easy and focus on the midweek game against Besiktas? The answer was no! Within ten minutes Bayern had scored their fourth of the night with Arjen Robben finishing off a beautiful combination with Corentin Tolisso to score from 12-yards out.

After the fourth Bayern goal, the tempo was gone from the match. Furthermore, Bayern head coach Jupp Heynckes was forced to take off Corentin Tolisso in the 65th after the French midfielder came on at halftime with a suspected serious injury for Sebastian Rudy. As a result, the game went flat for about 15 minutes until Ribéry came up with a piece of magic dancing through Hamburg’s defence and curling the ball past HSV’s keeper Mathenia to make it 5-0 in the 81st minute.

It could have been worse for Hamburg, however, in the 85th minute Thiago was brought down in the box, and the penalty was given. Lewandowski, however, missed the penalty. Three minutes later Lewandowski was able to redeem himself as Bayern were given another penalty and this time the Polish striker did not miss making it six on the night for Bayern. It was the final kick of the game in what was another disappointing performance by Hamburg in Munich.

Bayern vs Hamburg- Man of the Match: Frank Ribéry #7

There have been plenty of questions about Frank Ribéry this season. The 34-year-old was deemed too old, and it often appeared that this could be his last ever season for Bayern. The Frenchman was terrific on Saturday evening scoring two goals and creating countless chances for Bayern making a big argument for himself to start against Besiktas on Wednesday. 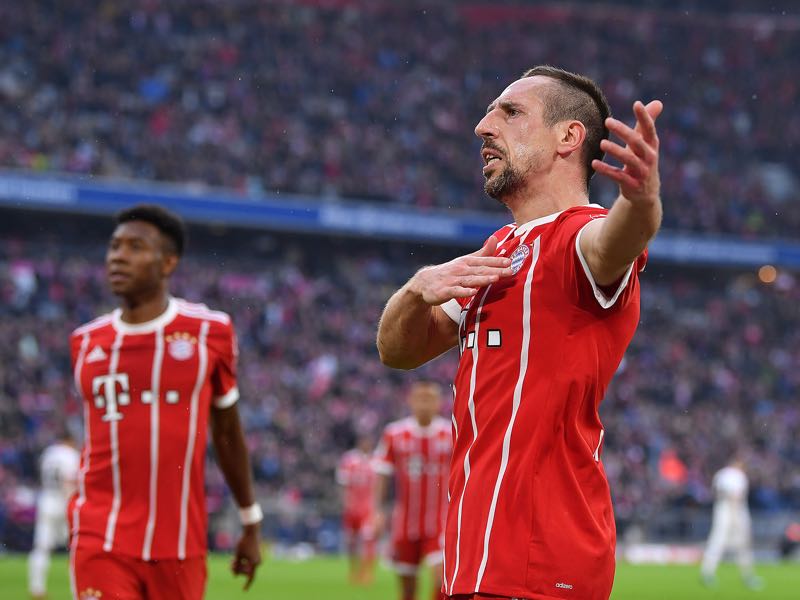 Bayern vs Hamburg – Frank Ribéry was the Futbolgrad Network player of the match. (Photo by Sebastian Widmann/Bongarts/Getty Images)

Another defeat by Hamburg in Munich means that die Rothosen could go bottom of the league on Monday night when Köln face Werder Bremen. Hamburg seems hopeless and only recorded one shot and had 26% ball possessions as the last founding member of the Bundesliga to never be relegated is tumbling towards their first Bundesliga 2 season.