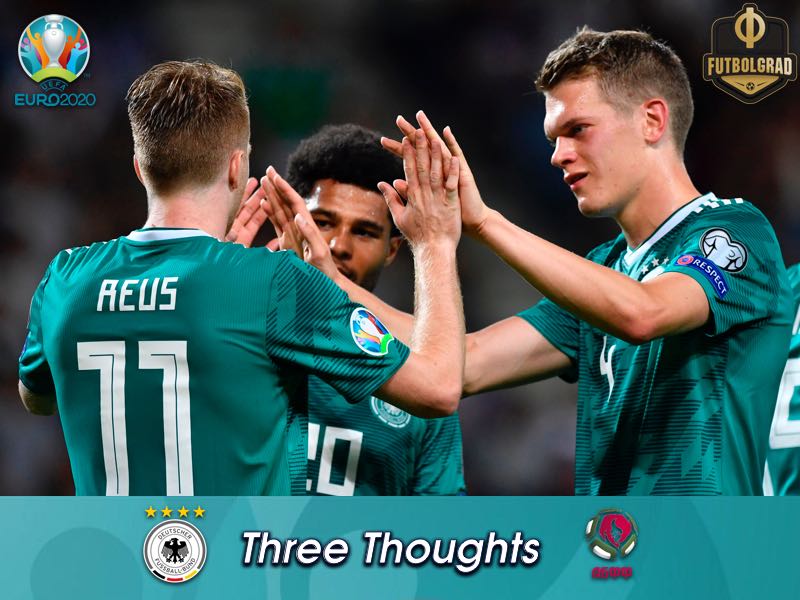 Half the job done, Germany brush aside Belarus

Belarus v Germany – After beating the Netherlands in the spring, Germany won their second Euro 2020 qualification match in a row. It was a pedestrian performance by die Mannschaft against a Belarus side that at times was allowed to threaten Germany’s backline but simply lacked the quality to take points of Germany

Germany only do what was necessary

June games are always unpopular among national team players. Germany’s Marco Reus, in fact, criticised the date of the qualification matchups in an interview with kicker last week.

After all, most players are off for about two weeks ahead of the qualification games. They then need to sharpen their senses for two games and then return on holiday mode. Not an easy task and that was apparent against Belarus.

“We had to overcome a lot of resistance against a deep-lying opponent,” interims head coach Marcus Sorg said to RTL after the game. “On the whole though, we can be pleased with our performance,” he added.

Germany quickly got the job done with Leroy Sané scoring early in the 13th minute and then Reus adding a second in the 62nd minute. Both goals were clinical, in between, there were periods in which Germany bossed possession, and Belarus was at times allowed to break forward.

The second goal then broke the Belarusian’s back and Germany more or less simply circulated the ball, knowing that their work was done.

It was a busier than expected evening in Borisov for goalkeeper Manuel Neuer. The Bayern München keeper, however, highlighted once again that voices suggesting that he is no longer the best keeper for Die Mannschaft were premature.

Neuer, in fact, had to make a brilliant stop when Germany were only up by one goal. Furthermore, he often had to play outside of his area and completed 19 passes (pass completion 95%). 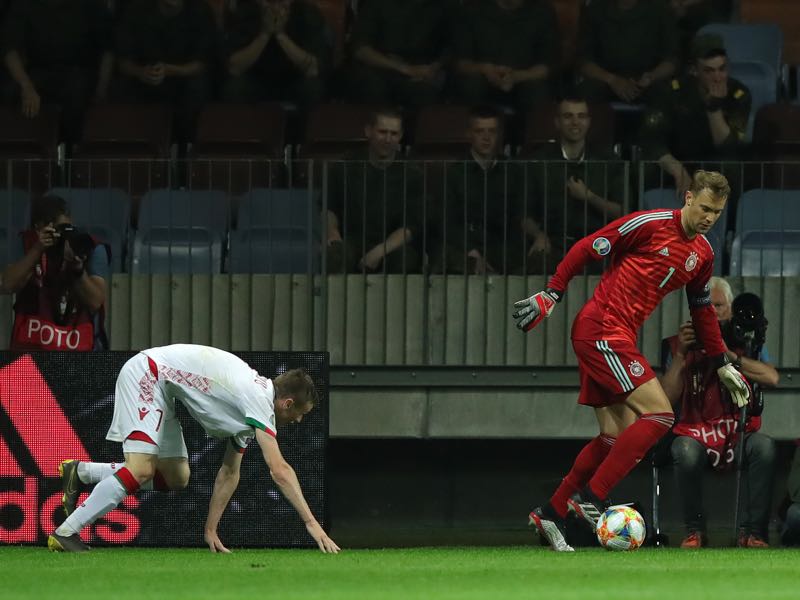 The most remarkable scene came in the 32nd minute when he beat forward Yuri Kovalev to the ball all the way out on the corner flag. Challenged by the striker the keeper danced past the forward and then cleared the ball. It was yet another indication that Neuer is past the poor form that he displayed earlier this year.

“We know that we can rely on Manuel Neuer, but other than that, we didn’t give them much to work with,” Ilkay Gündogan said to the media after the game.

“We are extremely satisfied,” Manuel Neuer said after the game to the television station RTL. “We wanted to win away from home, which can be difficult against teams that sit back and just try to defend. We did well tonight, although we did miss a few chances,” he added

Half the job is done

Germany have collected the first win out of two must-win games. Belarus at times was a difficult opponent making it difficult for Die Mannschaft to display creative moments.

“We had to sacrifice some of our normal joy tonight given the fact that Belarus sat incredibly deep inside their own half,” Marco Reus said after the game to RTL.

The attacking midfielder was also quick to point out that the job was not done yet. Said Reus: “We’ve completed the first step though. The second needs to follow on Tuesday [against Estonia].”

Die Nationalmannschaft will now travel back to Germany where they will face Estonia on Tuesday at the Opel Arena in Mainz. In Estonia, Germany will once again face a team that will sit deep and try to hurt Germany by quickly breaking forward. Hence, the game against Belarus in many ways will have set the stage for Tuesday’s matchup.