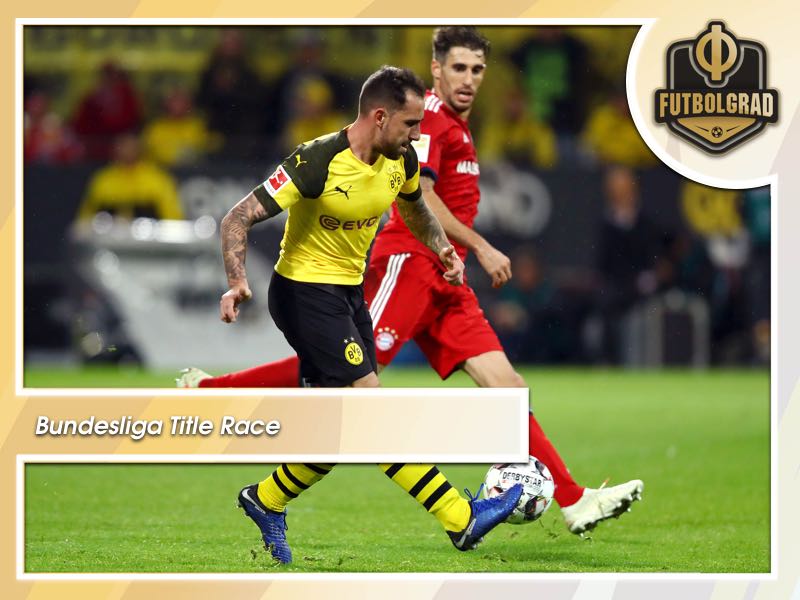 Borussia Dortmund and Bayern: The title race is heating up

Borussia Dortmund threw down the gauntlet to their title rivals with a fine 3-2 victory over Bayer Leverkusen at Westfalenstadion on Sunday night. It was their first win in six games and it saw them retain a three-point lead over the marauding Bayern München at the top of the table.

They must each play another 11 league games before the end of the season and the title battle looks like going right down to the wire. Bayern Munich have all the momentum right now, but Dortmund showed they will not stop fighting as they saw off a strong Leverkusen side on Sunday.

At one stage in the season, Dortmund enjoyed a healthy nine-point lead over their bitter rivals and they were odds-on favourites to win a first Bundesliga title in seven years.

However, Bayern have since chipped away at that lead and they moved level on points with Dortmund when they held on for a 1-0 win over Hertha Berlin on Saturday. Yet Dortmund won their game in hand as goals from Dan-Axel Zagadou, Jadon Sancho and Mario Götze handed them a 3-2 win over Bayer Leverkusen.

The top rated online sportsbook now make Bayern the favourites to overhaul Dortmund and win the title, but the betting is very close and it looks like developing into a thrilling title battle. German football has not seen the likes of it since Dortmund won back-to-back titles under Jürgen Klopp in 2010/11 and 2011/12.

Since then Bayern have won six league titles in a row and they have been supremely comfortable each season. It is great for the neutrals to see a genuine title race taking shape, and it is all the more remarkable when you consider Dortmund’s recent transfer record.

Borussia Dortmund sold Ousmane Dembélé for almost €120 million to Barcelona and then lost star striker Pierre-Emerick Aubameyang to Arsenal, while defensive lynchpin Sokratis followed him and the departure of Christian Pulisic to Chelsea was then sanctioned.

Yet the club has been very shrewd in the transfer market, bringing in a number of superb talents at low prices. Sancho is enjoying a sensational season after arriving from Man City for less than €10 million, while Paco Alcacer has proved to be an excellent addition and Axel Witsel and Thomas Delaney have turned the midfield into a real force to be reckoned with.

Dortmund now need to get Marco Reus back in the team as quickly as possible. Their downturn in form coincided with him suffering an injury, and they did well to beat Leverkusen without him, as he is so integral to their attacking play. Maximilian Philipp plugged away in that role to little effect, and Götze looks better out wide, so the sooner Reus returns, the better. Yet there is still plenty of depth to this Dortmund squad and they look well equipped for the run in to the season.

Their 3-0 defeat at the hands of Tottenham in the Champions League last 16 could turn out to be a blessing in disguise. Bayern did well to hold Premiership leaders Liverpool to a 0-0 draw at Anfield, and they could well make it through to the next round. Meanwhile, Dortmund are all but eliminated, and that will allow them to focus solely on their remaining 11 Bundesliga games, without any distractions.

They can treat them like 11 cup finals, and they could secure a strong points haul, as they mainly face teams in the bottom half of the table between now and the end of the season. Their game away at Bayern on April 6 will be huge. They beat them earlier in the campaign, and if they can get a draw in this one their destiny should be in their own hands. Bayern still have to travel to Monchengladbach and Leipzig and face Eintracht Frankfurt on the final day, so Dortmund have the kinder run-in and they could finally end Bayern’s dominance of this league.