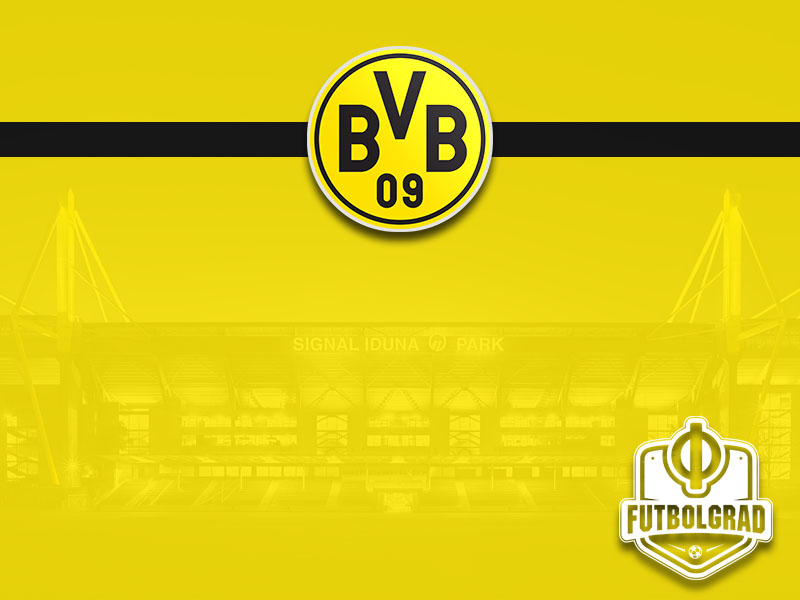 The Bundesliga is back! Fresh from a comprehensive 0:4 away victory in the DFB Pokal, against Rielasingen-Arlen, Borussia Dortmund will open their 2017/18 league campaign away to relegation escaping Wolfsburg.

Under new Head Coach, Peter Bosz, they had been tipped by to go all the way this season and capture their first Meisterschale since 2012. However, a striking Ousmane Dembélé managed to pour cold water over what was a hot build up by many. The actions of the Frenchman have won him little new friends or endeared him to old. Dortmund is suffering from the ‘Neymar Effect’, the Brazilian’s move to PSG opened the way for Barcelona to tap-up at worst (unsettle at best) one of their biggest upcoming stars.

Controversy aside, Borussia Dortmund have many reasons to be confident as the opening weekend arrives. Out went Thomas Tuchel after Pokal success in Berlin—a victim of souring relations between the trio of management figures, his future looked uncertain once the shock of the Champions League bomb incident eventually quietened down. As it was, even the sweet success over Eintracht Frankfurt and automatic qualification for the group stages of Europe’s premier competition was not enough to save Tuchel—the ex-Head Coach was embracing the wonder of Twitter to tell the world his exclusive.

Die Schwarzgelben moved fast, swooping into Amsterdam and lifting one of the most lauded coaches in European football last season away from his project at Ajax. Peter Bosz had taken the young Dutch side all the way to the Europa League Final, ultimately undone by anti-football tactics his young guns fell at the final hurdle to Manchester United.

What he had shown to the watching hierarchy at Dortmund was an ability to develop youth talent, lifting players to the next level. For a side that is littered with potential talent, Bosz is the perfect fit for BVB – Dortmund broke the buy-out record for a coach in Germany, handing over €5 million to Ajax secured his services. Speaking at his unveiling press conference, Bosz said “’Dortmund are among the biggest clubs in Europe. It is a great honour to train this club, and I’m sure it’s the right step. We had a long talk together, over three hours, and we spoke about everything. I am convinced that we can work very well together.” 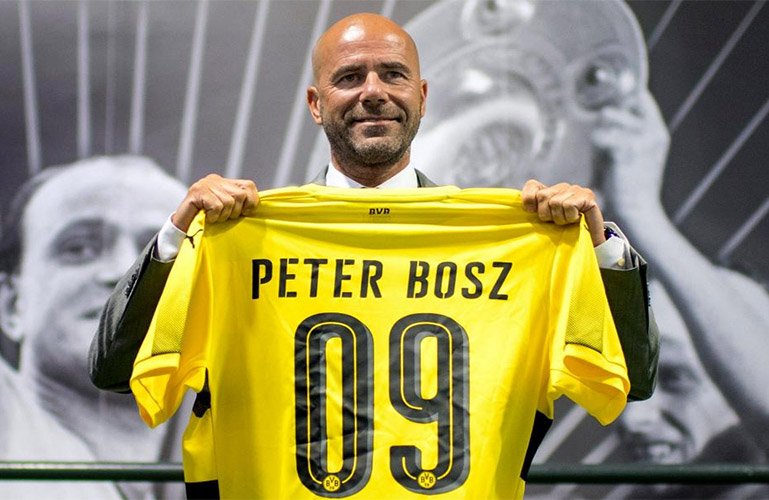 Should Dortmund remain strong and educate Dembélé to see the error of his ways, then they could have one of the strongest squads in Europe, let alone the Bundesliga. New arrivals include Mahmoud Dahoud, swapping Gladbach for Dortmund, the German international will be a key component of an exciting midfield. At the back reinforcements arrived in the shape of Leverkusen’s Ömer Toprak, the Turkish centre back a €12 million necessity from the Werkself. A surprise arrival, but one well earned through his performances for Freiburg last season is Maximilian Philipp. The U21 talent is joining the Ruhr club on a five-year-deal.

Departures included Sven Bender—who opted to join twin brother Lars at Bayern Leverkusen and defender Matthias Ginter who moved in the opposite direction to Dahoud, swapping the Borussia of Dortmund for that of Mönchengladbach. Mikel Merino who struggled to adapt to life in the Yellow and Black has joined Premier League side, Newcastle United, on a season long loan – whether he returns from it is another question.

A strong performance in the capital saw Dortmund lift the Pokal in May, their fourth championship and with it an end to a season which tipped from sublime to surreal at times. Caught up in a horrendous terror attack, the players were targeted on their way to a Champions League Quarter Final fixture versus AS Monaco. Marc Bartra was lucky to come out with just damage to his arm; it was a wonder no-one was killed. The events on 11 April 2017 drastically affected the players, but they were made to carry on, which gained them the respect of an entire football watching world. Their exit from Europe at the quarter-final stage was no surprise given the events they witnessed, and it was a testament to their character they were able to see off a late charge by Hoffenheim to snatch the last automatic group place the Bundesliga has to offer. Berlin in spring was a present for all—players, staff and supporters. It underlined the club’s tag line of Echte Liebe.

No review of 2016/17 would be complete without a mention of Pierre-Emerick Aubameyang; the Gabonese striker secured the Torjägerkanone on the final day of the season. A beautiful goal against Werder Bremen followed by a late-late penalty against the Grün-Weißen was enough to see the striker pip Bayern’s Robert Lewandowski to the top scorer award by one goal—31 goals in total and worthy Torschützenkönig. 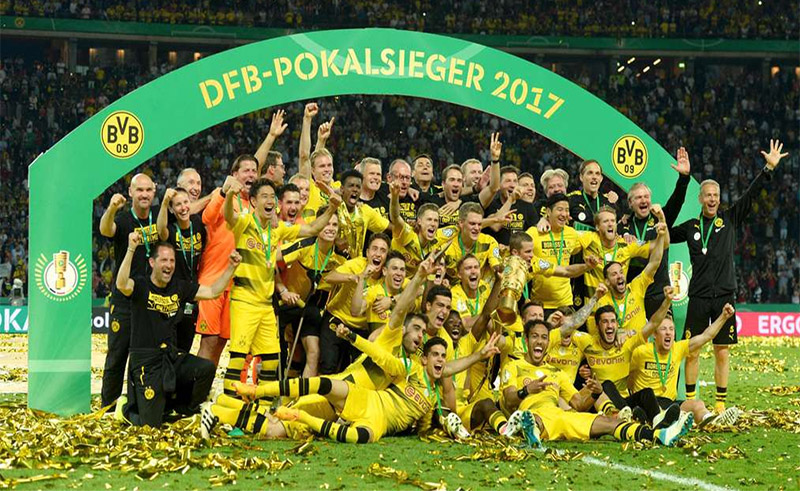 With the additions made by Dortmund it will be critical to keep hold of Dembélé, should they achieve this they may just pick up their first Championship since the departure of Jürgen Klopp. A stronger defence, coupled with the arrival of Dahoud could see a midline to rival that of when Gündoğan and Mkhitaryan played. Their attacking options are plentiful. Aubameyang is the jewel in a crown that contains Christian Pulisic, Phillip, Dembélé, Marco Reus, Mario Götze, Andre Schürrle and Alexander Isak. Another sustained run in the Champions League should see the 2013 finalists reach the Quarter Final as a minimum, whereby the Pokal seems to be incomplete in recent history without a Dortmund appearance.

The stars (and stripes) have aligned, and with it, the focus is on  Pulisic. The American forward player is the poster boy for a country where the league is growing in popularity—at a massive rate.  His performances last season were enough to show a watching world that big things await the 18-year-old. Should Dembélé depart late August, the pressure will be firmly on the shoulders of Pulisic to be the leading provider for Aubameyang. A pressure he can handle, and will most probably thrive on. In Bosz he has the exact coach required to nurture this talent, quickly and on the biggest stage.

The disappointment of the Season:

Even though a ball hasn’t been kicked yet, there will be less disappointment in the next eight months than that already felt by the actions of Ousmane Dembélé. With talent, well beyond his years, he will need his maturity to catch up at a quick rate if he is to repair the damage done in the last two weeks. Speaking to Kicker in the last 48 hours, team mate Sokratis said “He must understand that no player is bigger than the team, he cannot do what he wants, and he should use Pierre-Emerick Aubameyang as an example. He is very professional in every game and every training session and has scored three goals in the first cup round — Ousmane was not there, Ousmane did not take a strike.” Enough said!

With Bayern an ageing squad and Ancelotti seemingly moving on next June, Dortmund are in prime position to take the attack back to the Bavarians’ this season. Under the guidance of Peter Bosz, they should be a frightening sight for any opposition, with the arrival of Toprak and Dahoud enhancing an already strong Yellow and Black dressing room Dortmund have what it takes to be champions come May. They should sit pretty on top of the pile as the Bundesliga ends on Matchday 34.

Berlin would seem empty without Dortmund but can they reach their sixth straight Pokal Finale? I’m sure many fans wouldn’t mind missing the trip just this once if it meant the Meisterschale made its way back up from the Allianz Arena. Notwithstanding this, it would be a shock not to see BVB reach at least the Halbfinale stage. Champions League hopes very much rest on the initial group stage draw – will the gods be kind to Dortmund? If so then they will be steered to the knock out stages by their European finalist. In knock-out football, any team is capable of an upset. A Semi Final appearance might just be the top level they could ask for, a season by season improvement would be welcomed by all at the Westfalenstadion.