Borussia Dortmund sources have told Fußballstadt that the club is not currently tracking Liverpool forward Divock Origi, despite reports surfacing over the weekend suggesting the opposite.

Origi has seen his playing time at Anfield severely limited this season, even with an injury to backup forward Diogo Jota and the Premier League and Champions League winner looks to be surplus to requirements as Jürgen Klopp plans for Liverpool’s future.

Reports that the Westfalenstadion side are tracking his availability were shut down quickly Monday afternoon. Dortmund have a plethora of emerging talent to be called upon should main striker Erling Haaland leave the club this summer – something the Schwarzgelben do not expect to happen either at this present time.

Haaland’s performance with the Black and Yellows since his arrival from Red Bull Salzburg in January 2020 has been phenomenal, breaking a number of Bundesliga and Champions League records en-route to his 33 goals and eight assists in 31 appearances this season alone.

Links to Dortmund and Origi stem from a ‘recruitment source’ considered as agent talk by those Fußballstadt spoke to. The Belgian forward has played in the Bundesliga before, without setting the competition on fire.

Joining Wolfsburg on a season long loan in 2017/18, the striker made 36 appearances and only averaged one goal every 5 games, something short of Borussia Dortmund’s requirements – especially should Haaland have a surprise exit in the summer.

New coach Marco Rose has been given assurances that he will not be faced with a talent exodus in July, and Jadon Sancho seems to be the most likely of the two to leave – should an acceptable offer be received.

Manchester United did appear to be in pole position to land the Englishman’s signature – after their keen but distant interest in the summer transfer window, but the winger is thought to prefer a move to Spain should one become available. 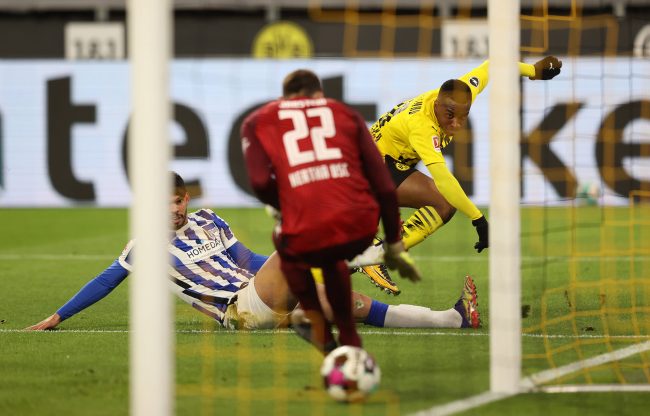 Youssoufa Moukoko already has an eye for goal and his pathway to the Dortmund starting XI will not be blocked by another backup such as Liverpool’s Divock Origi. (Photo: Jürgen Fromme/firo Sportphoto/poolfoto)

Should Haaland remain at Signal Iduna Park until 2022, as suggested by Hans-Joachim Watzke back in January, then teenage sensation Youssoufa Moukoko will be the primary backup to the Norwegian in Dortmund’s central striking role.

The 16-year-old already has three Bundesliga goals to his name, and has shown an ability and potential that the Black and Yellows will want to nurture – certainly not block his pathway with another secondary option.

Meanwhile, 22-year-old Steffen Tigges has also seen his playing time increase since being promoted to Dortmund’s senior squad, playing all 90 minutes in the DFB-Pokal tie against Eintracht Braunschweig, as well as a number of cameo Bundesliga appearances from the bench.