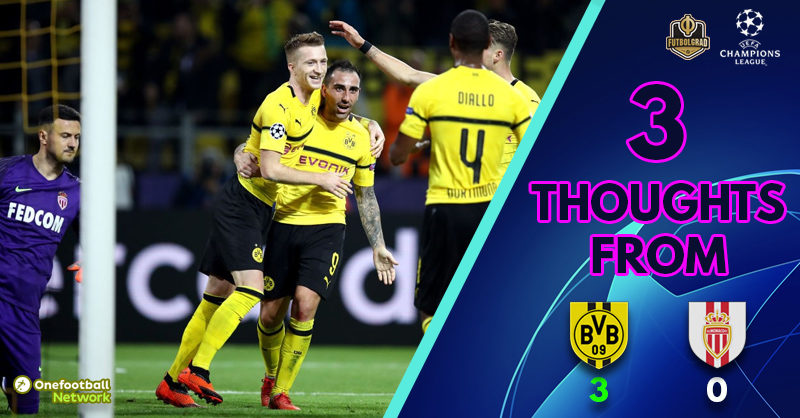 The sky is the limit! Three Thoughts from Dortmund v Monaco

DORTMUND — Borussia Dortmund v Monaco was somewhat in the shadow of the events that took place in the spring of 2017. Dortmund’s club bus was a target of a terror attack ahead of the quarterfinal between the two clubs in the 2016/17 season.

Ultimately, Monaco advanced to the semifinal. Dortmund, in the meantime, had a season and a half in which they went through three different coaches. That is in the past now as die Schwarzgelben were excellent against Monaco walking away with a 3-0 victory.

Here are our three thoughts from Borussia Dortmund v Monaco:

The plusses and minuses of the double pivot

The double pivot with Axel Witsel and Thomas Delaney brought plenty of stability to Borussia Dortmund. But at the same time, the two also take away some creativity from Dortmund’s midfield.

As a result, Dortmund somewhat lacked the ability in the first half to dissect a Monaco side that was mostly focused on finding stability after some troubling results in Ligue 1.

Hence, with two sides looking for stability rather than offensive power it was a somewhat lacklustre performance in the first 45 minutes. “Monaco was well organised. We wanted to be patient. They had a few good opportunities. The first half was okay the second half was much better,” Dortmund head coach Lucien Favre defended his decision to start both.

⚽️#BVB bring power from the bench

Favre, in particular, values the balance that Axel Witsel brings to the side. “He is very important. With the young players we have we also need experienced players. They bring balance to this side,” Favre told the press after the game.

Power from the bench

Despite the balance, Dortmund, however, lacked power in the first half. “[In the second half] were better at winning the ball and played forward with more pressure,” Favre rightfully pointed out.

But not the double-pivot was sacrificed at halftime but instead Marius Wolf for Jacob Bruun Larsen. With Bruun Larsen on opted for a very young wing attack with both Jadon Sancho and Bruun Larsen playing at the same time. 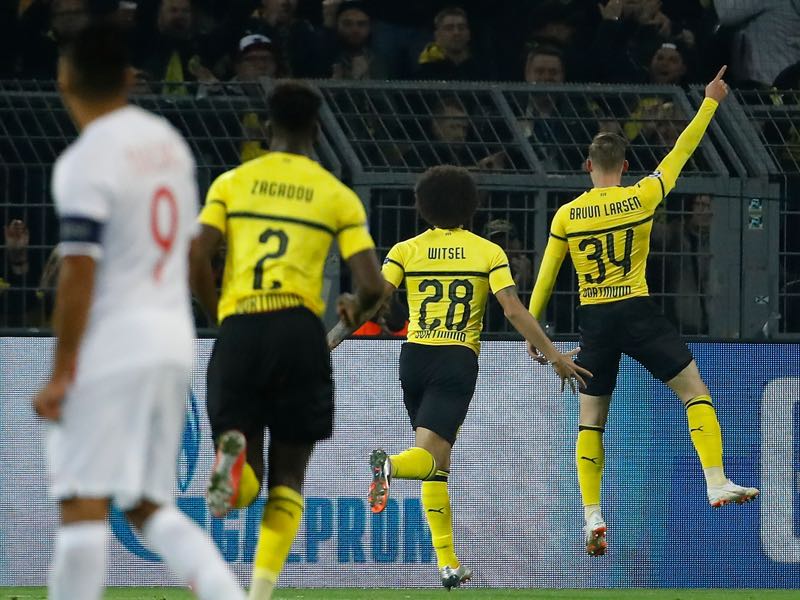 “Sancho started on the right and then was moved over. He is very good in one-v-one situations but still makes mistakes,” Favre evaluated the Englishman’s performance. “They have a good basis. They still have a lot to learn. They played with a lot of confidence,” Favre, however summed up the performance by his young players.

As for Bruun Larsen, whose substitution brought extra power to Dortmund Favre only had one thing to say: “he has a good nose for the goal.” It was already Dortmund’s eighth joker goal of the season and highlights that Die Schwarzgelben have tons of fire power on the bench.

Finally, the 3-0 victory should finally put to bed any questions about the terror attack on Dortmund’s bus. Die Schwarzgelben were excellent throughout the game never showing any signs that the events from 2017 were still playing a role in any mental aspect of the club.

In terms of Vergangenheitsbewältigung (coming to terms with the past) Dortmund did not only have to deal with the events from the spring of 2017. Dortmund did not win a single match in the Champions League last season and are out to show that last year’s European season was only a blip.

Borussia Dortmund v Monaco 3-0. A result that should provide closure (Photo by Christof Koepsel/Bongarts/Getty Images)Hence, the terror attack was only a side topic in and around the match and much more focus was placed on sporting matters. With three points in the bag and a satisfied fan base after three victories in the last three games and now two wins to start the Champions League, the talk has now shifted to how far this team can go this season.

“We still have to think game to game. It still depends on details. Monaco were dangerous from time to time. We have to control them better. All the details have to improve. It will take time. Zagadou, for example, has never played like this three times in a row. We need time to correct and work on individual players,” Favre concluded.

Hence, this game was about Vergangenheitsbewältigung but also looking ahead to a Borussia Dortmund side for which the sky seems to be the limit.