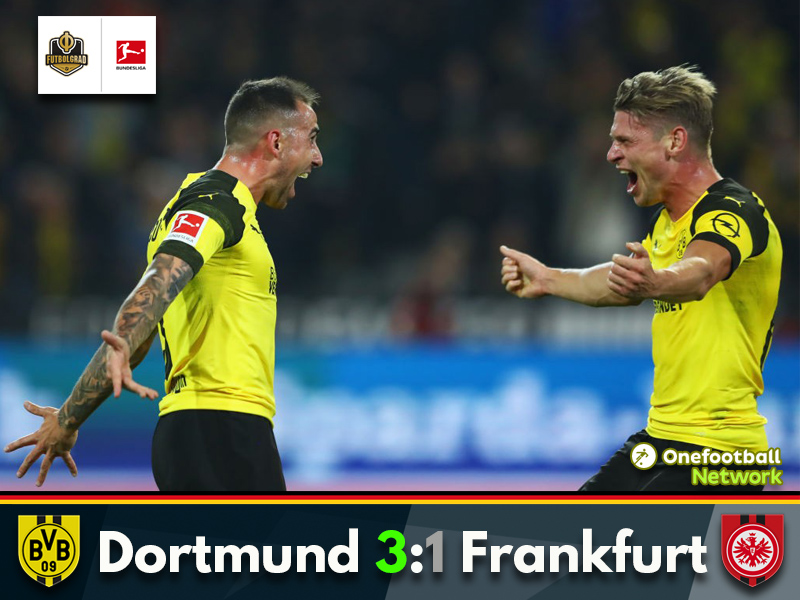 Dortmund eventually fire past Frankfurt thanks to Jadon Sancho’s creativity

As expected Borussia Dortmund vs Eintracht Frankfurt once again provided Friday night goals. Dortmund came from behind to eventually grab all three points against a Frankfurt side who are now are nine games without a point at the Westfalenstadion.

Dortmund started brightly and should really have found the net in the opening moments, Marco Reus broke free of the Eintracht defence but couldn’t find the right ball into a waiting Maximilian Philipp.

Weathering an early storm, Die Adler then had their own chance – Filip Kostic almost punished a mistake by Marcel Schmelzer. Roman Bürki in the Dortmund goal spared his defender any embarrassment as he punched the close range shot clear.

With the game only six minutes old and chances for both sides, the history of this fixture once again looked like it could dictate future events – only two of the previous 90 meetings between the two sides had resulted in a goalless draw.

It was no surprise then that as the clock approached 10 minutes Dortmund carved themselves out an opportunity of real promise – Łukasz Piszczek burst down the right wing, his cross was met by Philipp but the forward could only guide his touch wide of Kevin Trapp’s goal.

Frankfurt could sense the danger, their response was to withdraw deep – trying to stifle their hosts play while looking to hit them on the break, inadvertently it played to Dortmund’s strength. 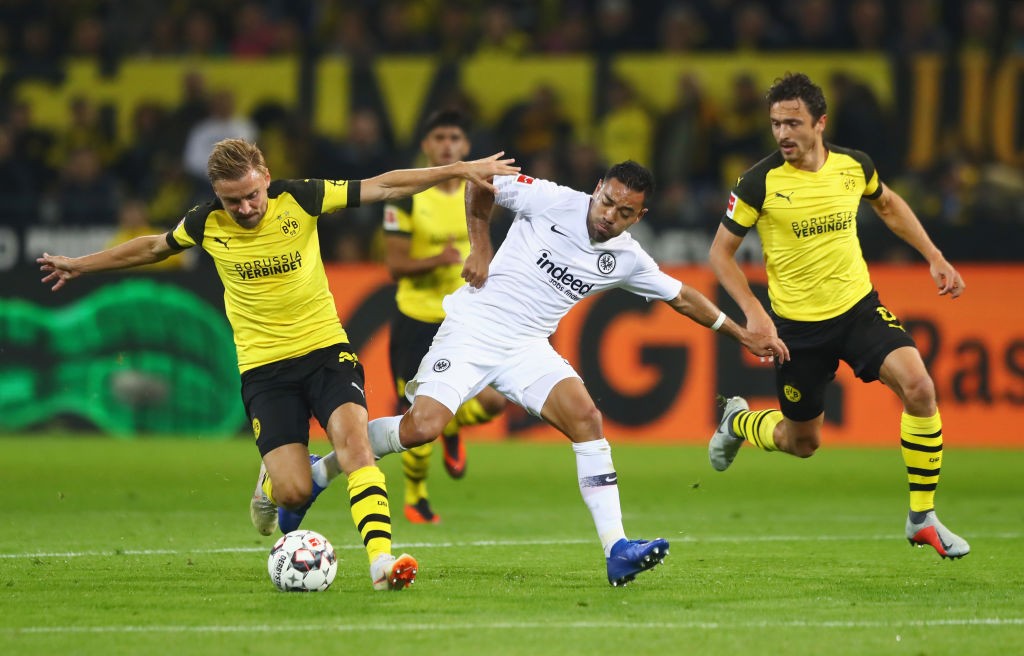 With only Sébastien Haller in the attacking half for Frankfurt this allowed both Schmelzer and Piszczek the time and space to attack down both wings for the home side – it was to be a telling factor as Dortmund went in search of an opener.

Jacob Bruun Larsen started in place of Axel Witsel – the 19-year-old Dane thrown into the Dortmund line up after scoring four goals in a behind closed doors friendly during the international break – and it was his corner that found Abdou Diallo with just under 10 minutes remaining of the half.

The defender was allowed three bites of the cherry by the Frankfurt back-line and he eventually found the net after two point blank saves by Trapp.

It was scrappy, but no one on the banks on the Yellow Wall objected – Diallo had his first goal for the side in yellow and black.

How would Adi Hütter approach the second half? Frankfurt had given Dortmund moments of concern when they mounted an occasional attack, would he allow his side to test the yellow and blacks, or would he remain cautious?

As the second half stuttered into a rhythm of sorts it was Dortmund who remained in control, Frankfurt just didn’t show any appetite to really test their opponents – for their part, the hosts couldn’t find the cutting edge that a second goal required.

Hütter could see that Dortmund weren’t at their best, and on the hour mark the Frankfurt coach introduced both Jonathan de Guzmán and Luka Jovic. It began to work almost immediately, The Eagles began to press and Dortmund looked uncomfortable.

Lucien Favre then showed his hand, replacing Philipp – who had been on the fringes of the fixture – with new signing Paco Alcácer. However, the game turned almost instantly.

Resurgent with the introduction of a double substitution Frankfurt hit back. Mahmoud Dahoud was left wrong footed as Danny da Costa’s cross took a wicked deflection off Schmelzer – Sébastien Haller smashed his half volley past Bürki, it was a deserved equalizer. 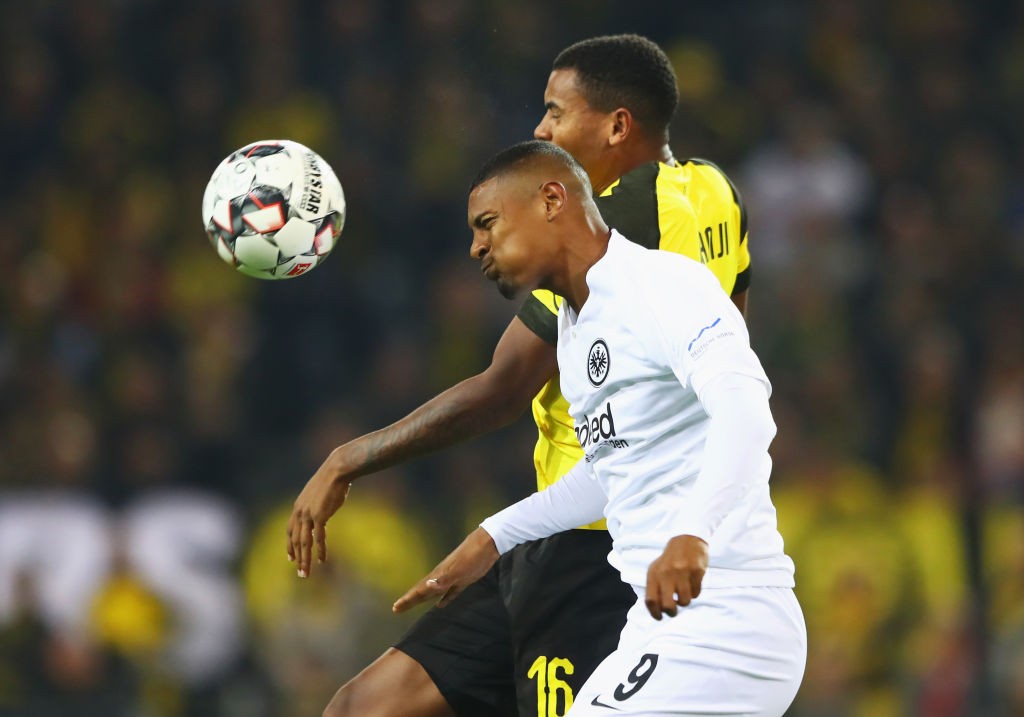 Manuel Akanji  and Sebastien Haller  jump for the ball during the Bundesliga match between Borussia Dortmund and Eintracht Frankfurt at Signal Iduna Park. (Photo by Martin Rose/Bongarts/Getty Images)

Frankfurt’s goal fired a sleepy Dortmund into life, just four minutes later they had their second goal – Jadon Sancho was brought on to replace Bruun Larsen and it was the young Englishman who set up Marius Wolf to inflict pain on his old side.

Wolf calmly brought Sancho’s cross down and smashed his new side back into the lead, although he decided not to celebrate you could see the smile on his face from the highest tier of the stadium.

With just two minutes remaining Paco Alcácer announced himself to the watching masses, the forward who joined from Barcelona at the end of the transfer window fired a rocket past Trapp which nestled in the top corner of the net.

Dortmund may be a team still in transition, but a comprehensive win against Frankfurt shows that Favre has the building blocks to potentially mount a challenge to Bayern.

Borussia Dortmund vs Eintracht Frankfurt – Man of the Match

Jadon Sancho came off the bench to provide Dortmund with the creativity and quality needed to fire them to the top of the Bundesliga. The English winger provided two wonderful assists that enabled die Schwarzgelben to turn one point into three. 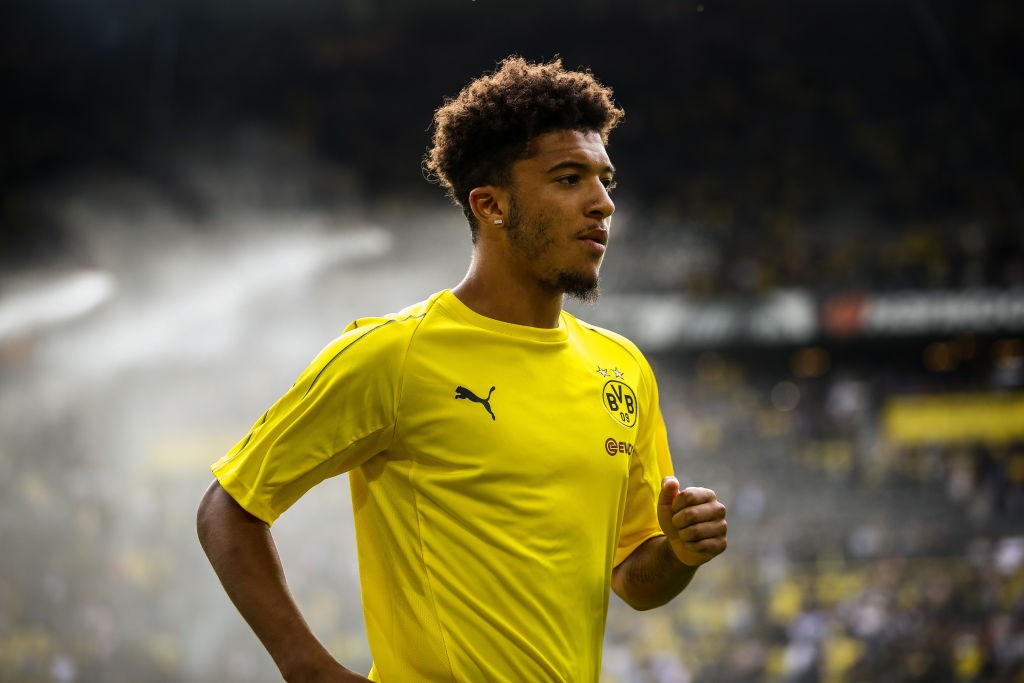 Dortmund showed signs of last season when they were unable to hold onto a one-nil lead, but unlike previous campaigns of late, Favre’s side have a desire to strike back once mistakes have been made. Their fightback against Frankfurt should send a signal to the rest of the league that their weakness may just be the catalyst to victory.

Loading...
Newer Post
Abedi Pele and 1860 Munich – The millionaire at the workers club
Older Post
1860 want to continue good run of form when they travel north to Rostock