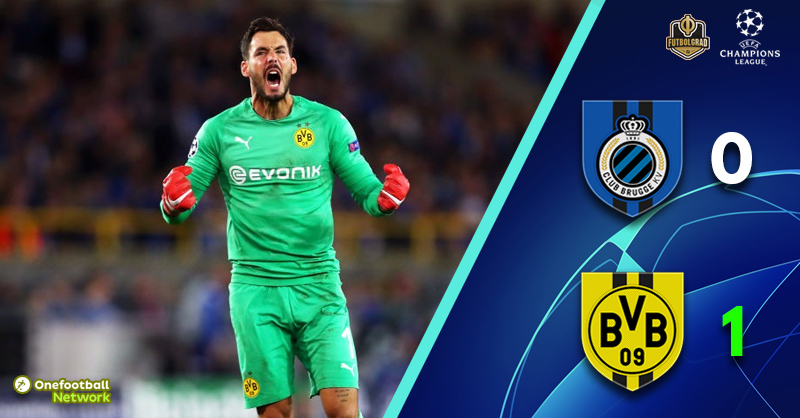 Brugge v Borussia Dortmund was dominated by the Belgium side for the first 45 minutes and then became a dull affair until Christian Pulisic rescued the victory for Dortmund.

Brugge started with plenty of energy into the match forcing Dortmund deep into their half in the opening 20 minutes. No surprise the Blauw-Zwart had the first chances of the game.

Jelle Vossen connected well with a cross from the left in the 11′ minute, but his header missed the target. In the 20′ minute, Marco Reus had to track back and clear a shot by Vossen, who was given to much room in the box, just before the goal line and in the 22′ minute Bürki had to be on guard to fist away a long-distance shot by Arnaut Danjuma.

Around the 30 minute mark, Dortmund managed to settle the game, and Abdou Diallo had the first big chance for Dortmund in the 31′ minute. A Jadon Sancho corner-kick was extended in the box and seemed to fall kindly within the six-yard box for the Dortmund defender, but Diallo missed the ball, and the chance was gone.

Just at Dortmund had the game settled Stefano Denswil produced the next chance for Brugge in the 38′ minute. A poor clearance fell to defender and his shot from about 30-yards only missed the far post by a whisker.

Halftime arrived, and Dortmund were somewhat lucky that the scoreline was still only 0-0. Dortmund head coach Lucien Favre was shown in deep conversations with his assistants as the Swiss head coach was contemplating changes for the second half.

Favre, however, elected to make no changes during the halftime. Instead, he tweaked the tactical approach with Dortmund pressing up a bit further the pitch trying to control the match through possession.

Nonetheless, it took until the 60′ minute, for Dortmund to produce anything tangible. A Marco Reus freekick from 25-yards out, however, curled past goalkeeper Karlo Letica’s goal. Shortly, after Favre had enough replacing Mario Götze, who once again struggled to make a mark on a BVB game, with Japanese playmaker Shinji Kagawa in 62′ minute.

That change helped Dortmund to even further tighten the noose around Brugge’s defence but at the same time the die Schwarzgelben struggled to find a way through, and in the 69′ minute Favre made his next switch bringing on American Christian Pulisic for Jadon Sancho, who had been busy but somewhat unlucky throughout the match – it was a change that would have a significant impact.

But before anything significant happened Dortmund almost tried to lull the opposition to sleep. Endless, passing around in midfield did not lead to any breakthrough. Instead, Brugge’s Lois Openda should have opened the scoring in the 82′ minute, but the 18-year-old was denied by Roman Bürki after going one-on-one with the keeper.

Instead, it was Dortmund to open the scoring. Pulisic challenged defender Matej Mitrović, and the Croatians clearance bounced off Pulisic and from there looped over goalkeeper Letica to make it 1-0 for Dortmund in the 85′ minute. It was the final moment of a game in which Dortmund will feel happy to have walked away with the three points.

Christian Pulisic was the man of the match. The young American celebrated his 20th birthday today and made the difference for his side after coming on. His deep press in the 85′ minute led to Dortmund’s only goal as Pulisic rescued Dortmund in Belgium.

Lucien Favre’s rebuild continues to produce various results. Resounding victories against Leipzig and Frankfurt were overshadowed by disappointing performances against Fürth (a 2-1 victory in overtime), Hannover (0-0) and tonight’s 1-0 victory. The three poorer performances all had the same in common: slow buildup play and a lack of attacking direction as Favre is still trying to put together the best starting eleven out of the many building blocks that his squad has in store.