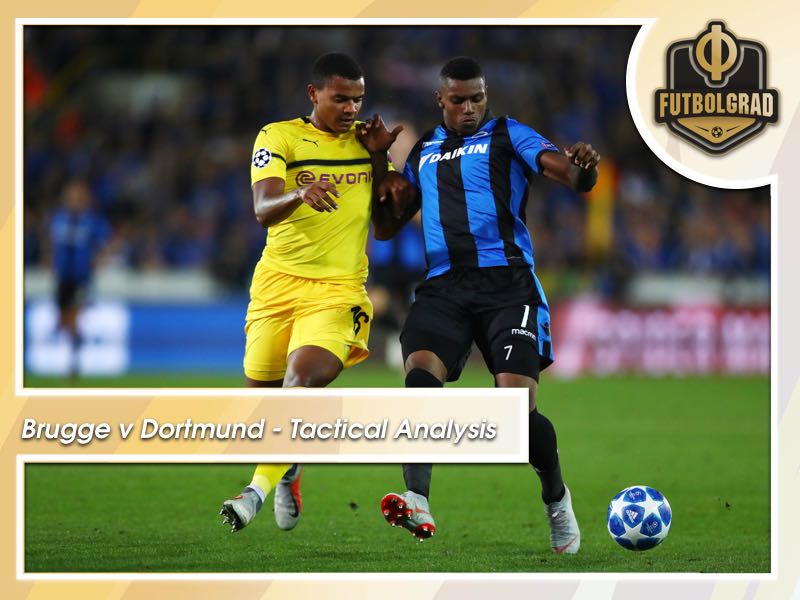 Brugge v Dortmund was the first Champions League match under Lucien Favre. We provide you with a full tactical analysis from the game.

UEFA Champions League matchday one presented a stern test for Lucien Favre and Borussia Dortmund. Off the back of a 3-1 win over Eintracht Frankfurt, Dortmund were looking to perform even better against their Belgian opponents, Club Brugge. Brugge on the other hand, came into the game hoping to turn their three-game winning streak into four.

The game resulted in a 1-0 win for Borussia Dortmund. However, the tactical performance was rather poor as Brugge controlled the direction of the game despite Dortmund having 60% possession. Luckily, just like last week’s game, it took a pair of substitutes to combine and score the winner to grab all three points. Here is our tactical analysis on how Brugge v Dortmund panned out.

Brugge v Dortmund – First Half: Brugge Dominate In All Phases Of The Game

As Borussia Dortmund pressed high, right from the start it was clear that their pressing structure was not going to trouble Brugge at all. The 4-2-3-1 formation saw Reus step up to pressure the centre-backs (already creating a 3 v 1 overload), while Götze man-marked Ritz in central midfield. Witsel and Weigl were pinned back by Vormer and Vanaken and this is where the issue lay. They were unable to step forward and cover the halfspaces in the event that Sancho and Wolf were pulled out of position.

The wide forwards were positioned in between Brugge’s wide centre-backs and wing backs, with the hope of defending two players at once, by blocking the passing channel. This tactic failed because either Vormer or Vanaken could drop in front of Witsel or Weigl, just behind the wide forwards in the halfspaces. 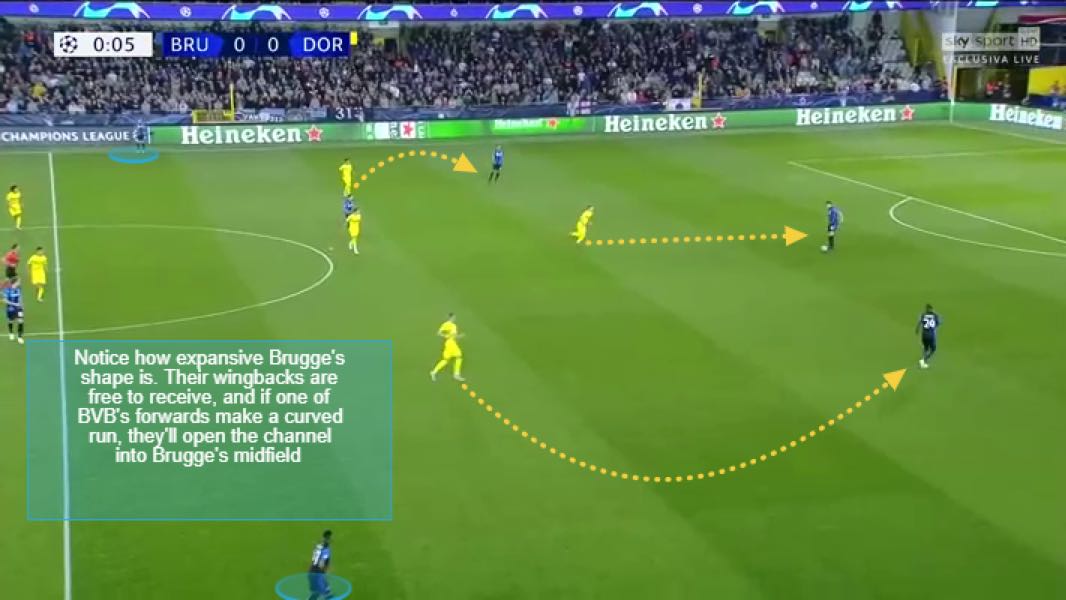 From here, they could receive passes from the centre-backs, before playing a pass out wide and progressing, thus completely eliminating Dortmund’s front four in one pass. If one of the wide forwards had access to the ball, you would usually see a curved run while they pressed the wide centre-back. But Brugge could just switch play as they had a 3 v 1 overload in their backline.

They not only had a 3 v 1 overload at the back but once passes were played into midfield, they would then have a 5 v 3 overload, or a situational 3 v 2 out wide. It was overloads galore for Brugge as they took advantage of the spaces they had in the wide areas throughout the first half. They were direct in possession, looking to create chances for their two large forwards from wide areas. They also had the other wing-back coming in on the far side, and either Vormer or Vanaken arriving late on the edge of the area. 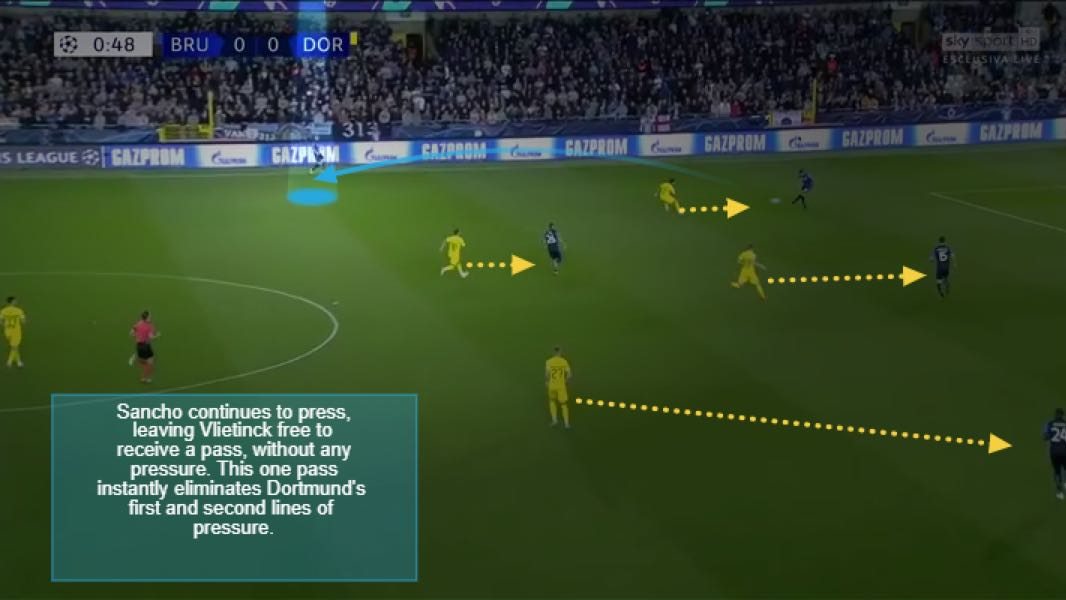 When a cross wasn’t on, they could simply switch play as, Dortmund would have to have shifted across, leaving a free Brugge man on the ball on the far side. They had a total of seven shots in and around the box, but their shooting accuracy let them down as they went agonizingly close on several occasions. Brugge, as well as they played, shot themselves in the foot, by not capitalizing on the quality of chances they had.

Now, this may sound like Brugge dominated possession in the first half. On the contrary, Borussia Dortmund did. The problem for Dortmund was that it was so easy for Brugge to break past their press and establish possession higher up the field. The main reason for this was because Schmelzer and Piszczek constantly had to push forward and provide width in attack, leaving gaps in behind them. That was the area Brugge would always play the ball into, as quickly as they could upon winning possession.

The first problem Dortmund had in possession was Favre’s choice of player personnel. He started with the wrong group of players just like he did against Frankfurt. For starters, he paired Weigl and Witsel together in defensive midfield. If he had used a three-man midfield, then the pairing could’ve worked, with a more advanced and creative midfielder to accompany the two. However, he used them both in defensive midfield which was a problem as they’re too similar.

They’re both players who dictate play from deep and rarely venture into advanced midfield areas. As I’ll elaborate upon later, Favre should’ve started Dahoud and chosen one over the other, as he never considered using a three-man midfield. Borussia Dortmund’s tempo in possession was slow as they were always forced into backwards and sideways passes and hardly ever penetrated Brugge’s midfield block.

Brugge spent most of the first half in a deep-midfield block. They used a position-oriented zonal marking system, with their players intent on remaining in their positions and marking zones in relation to their teammates. Their midfielders were well coordinated, but Dortmund did little to trouble them.

Mario Götze was often isolated inside their midfield block as Witsel and Weigl always remained deep, in front of Brugge’s midfielders and sometimes even in front of their forwards. Gotze, who was the only one who received the ball in behind Brugge’s midfield line often did so with his back to goal, meaning there was no progression beyond him and combinations in tight areas weren’t viable because of the midfield overload. 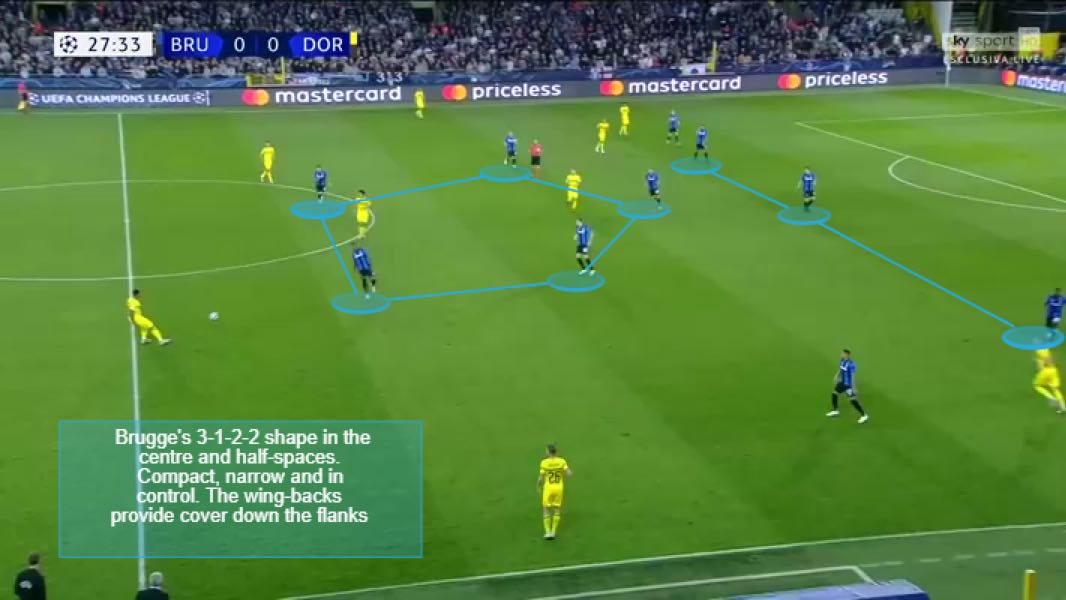 When Jadon Sancho ventured infield, he only had Reus running in behind the defence. Mario Gotze’s role was to create chances by playing in runners, not make the runs himself. This meant his only option would be Wolf on the far side which also wasn’t viable. Brugge would just shift and overload him in wide areas.

So what was Dortmund’s solution? Their fullbacks would push forward to support play and provide width. But this was an underwhelming move because Brugge always had players ready to shift and defend out wide. They also packed the box with players and without a target man, Dortmund’s crosses were ineffective. They did have two decent chances from crossing opportunities over the 90 minutes but that was caused by lapses in concentration rather than brilliant attacking play.

Of the eight first half shots that they had, five were from range, which was really disappointing. Brugge’s pressing style was passive; they weren’t easily manipulated by the ball. So what Dortmund required was either a change in shape to a 4-3-3 with wingers positioned high and wide or players such as Dahoud to speed up play and find passes to exploit the rare 1v1 situation. Maybe Max Phillip should’ve started up front with Reus playing in the hole behind him, or out wide (left or right) to create better crossing chances or draw two or three players around him opening up space elsewhere.

The first half ended 0-0. To win the second half, Brugge needed their shooting boots and Dortmund needed a structural/personnel adjustment.

Brugge manager Ivan Leko instructed his side to change their shape to a 4-4-2 at half-time. Leko must’ve taken note of the large amount of space Dortmund had out wide as Schmelzer and Piszczek were constantly outnumbered. The 4-4-2 allowed them to attack with two out and out wingers, and fullbacks who could overlap and support the attack too. With Mario Götze having disappeared from the game, he must’ve felt this was a risk he could take, despite conceding a 3 v 2 advantage over Dortmund in midfield.

In the first 15-25 minutes, the playing patterns of the 1st half were repeated. Dortmund were subpar in possession despite having an extra man in midfield. They struggled to combine and progress in tight areas during passing and movement plays and they were just too slow and predictable. 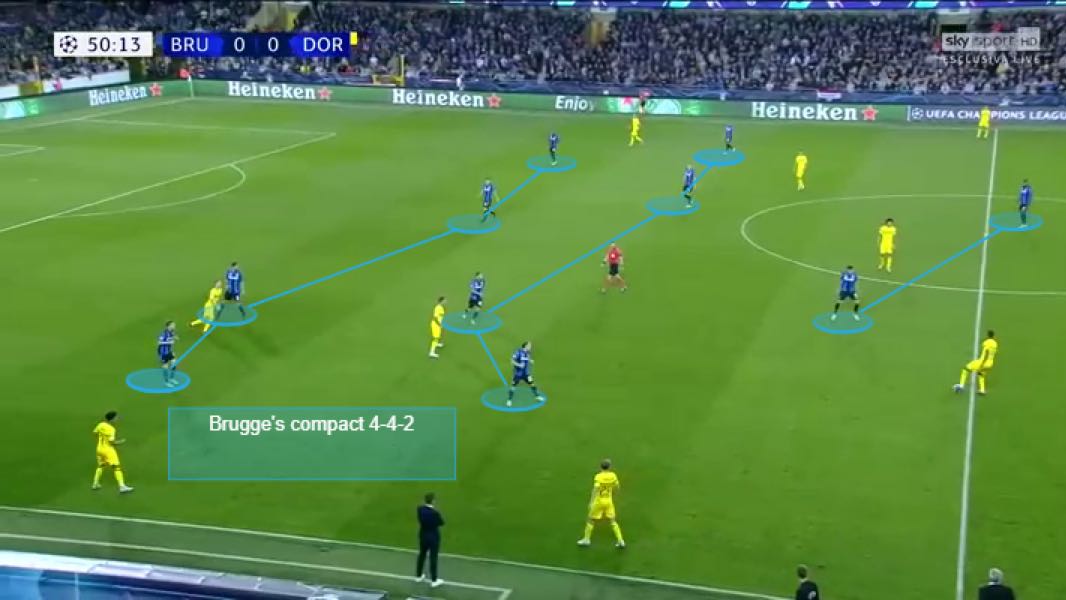 Brugge continued to transition into the attack by exploiting the space in behind Dortmund’s full-backs. Their counter-attacking was more effective, although as this 15-25 minute period wore on, the quality of their attacking play – the execution of crosses, their movement – diminished. There were two reasons for this.

Firstly, they couldn’t establish themselves high up the pitch for long periods anymore because they no longer had a numerical advantage in central areas. This meant that regardless of their movement, their shape wasn’t as expansive as it was in the 1st half. The ball wasn’t doing as much work as it had done. This put the emphasis on the wide players to create chances.

Since they weren’t able to do that, their chances came only during counter-attacks meaning they were constantly up and down the flanks. As the last third of the game edged closer the wide players began to tire, and they became more focused on preserving the stalemate. The substitutions in between the 70th and 80th minutes had little impact for both sides, until Lucien Favre brought on Mahmoud Dahoud, in the 83rd minute. Two minutes later, Dortmund were 1-0 up.

Firstly, Dahoud realises that in order to create space they must be patient but in an unpredictable manner. He constantly makes sideways passes but his movement is always forward and Brugge get lulled into thinking that they have the game under control. Dahoud and Dortmund eventually find themselves in the final third and Dahoud makes the key pass forward into Pulisic. Neither Weigl nor Witsel was able to get into such a good advanced position all game.

Dortmund finally took advantage of their extra midfield man. Dahoud signals for a player to enter the no.10 space, which Kagawa ends up doing. He ends up dragging his marker out of position after a sequence of play allowing Dahoud to enter that space and create the key pass. Although it was unlucky for Mitrovic to clear straight into Pulisic for a goal, this is why for Dortmund a good possession game is important. Not only do you have the ability to create more chances but the defending team is more likely to make errors under pressure deep in their own half.

The end result was neither fair nor unfair despite Brugge controlling the game for at least 70 minutes. Their first-half performance was admirable and it’ll be interesting to see how Diego Simeone’s Atletico Madrid deal with their flying fullbacks. Dortmund, on the other hand, will have to gel much faster than anticipated with a crucial fixture against Hoffenheim this weekend.

It is still unclear as to how they’ll perform against stronger sides this season, although teams who take the initiative against them will be welcomed as Favre’s team thrive on counter attacks. This is worrying because when they have to take the initiative against teams, they just aren’t finding it as easy. Of the 10 goals they’ve scored, 40% have been from set-pieces, while 50% have come after 80 minutes of play. This indicates that they’re struggling to break teams down during phases of possession. How Favre will fix this problem will be interesting because it has an impact on the defensive side of the game too.