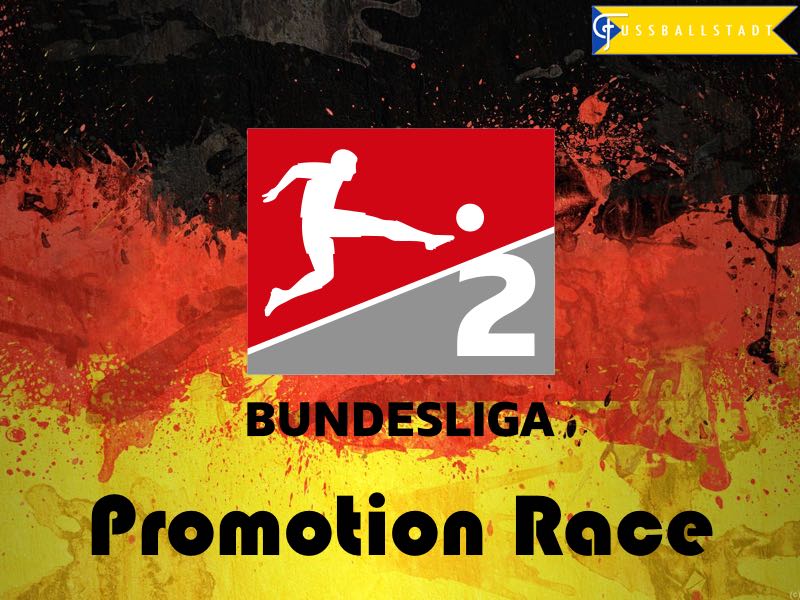 Bundesliga 2 – Who is Going to Win the Promotion Race?

Bundesliga 2 has always been an exciting league, and this season is no different as we take a look at the tightly fought promotion race.

Bundesliga 2 is possibly the most underrated league in European football. With packed stadiums and even more impressive trophy cabinets from glories past, there is a reason the division shares it’s name with the top tier. With the two competitions being run by the DFL there is a much smaller gap between the first and the second tier in Germany then is the case in other European countries. This is especially evident in this season’s promotion race.

The league has recently recorded the fifth highest attendance numbers in Europe and boasts nine previous Bundesliga champions. The strength of the competition also means that the promotion race is always a tight affair. Here are our contenders for promotion this season.

Who will win the promotion race? Here are our candidates: 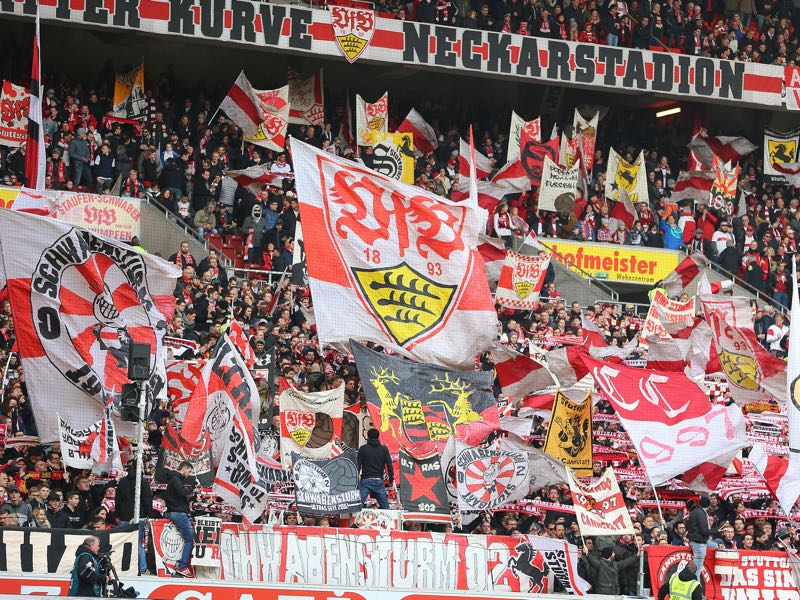 VfB Suttgart’s fans will be a major asset in the promotion race. (Photo by Thomas Niedermueller/Bongarts/Getty Images)

The 2007 Bundesliga champions were relegated last year after finishing 17th, but, this season, they are doing their best to forget those troublesome times with a positively consistent campaign. Die Swabians have recorded more wins (13) in the first 20 games than anyone else and are also joint top scorers. Those who attended games in the 60,000 capacity Mercedes-Benz Arena have had plenty to enjoy this season under former Borussia Dortmund II coach, Hannes Wolf.

The young coach has seen his side become joint highest scorers with the help of their Bundesliga 2 experienced striker, Simon Terodde. Terodde recored 25 goals in 33 games for VfL Bochum last season. The club currently has a three point lead and, with the recent addition of United States national team player Julian Green from Bayern München, it would be a major surprise if they not finish in one of the two automatic promotion spots come the end of May. Up next are former giants, Kaiserslautern, at home. A win in this game will be bring VfB Stuttgart one step closer to their Bundesliga return. 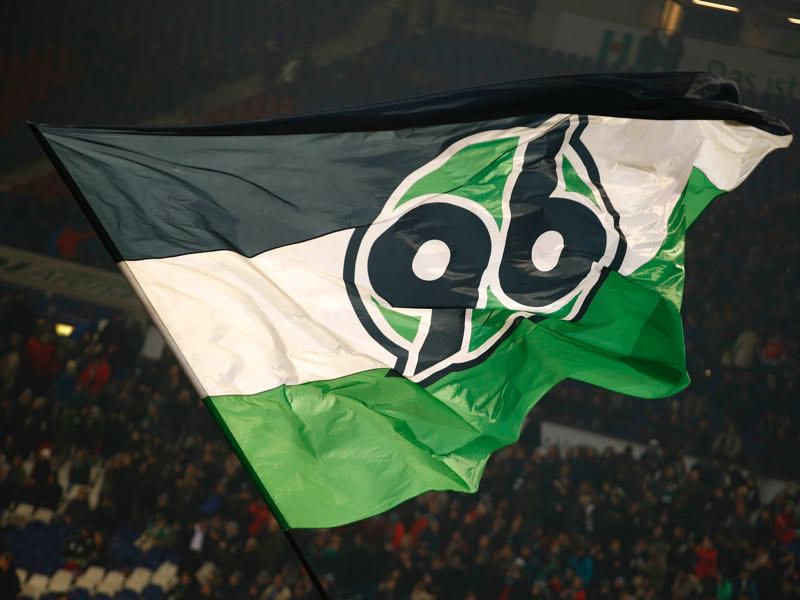 The Flag of Hannover before the Second Bundesliga match between Hannover 96 and VfL Bochum 1848 at HDI-Arena on February 13, 2017 in Hanover, Germany. (Photo by Joachim Sielski/Bongarts/Getty Images)

After a their latest victory over Dynamo Dresden, Hannover have moved into second after an impressive run of 4 wins out of six. Die Roten finished last season bottom of the Bundesliga, and consequently were relegated.

This season has been a polar opposite with the Lower Saxony club looking to bounce straight back up. Daniel Stendel, a former club striker in the early 2000’s, was handed the task of bringing the glory days back to the side and currently looks like the right choice.

Hannover have been a pleasure for both fans and neutrals due to their attacking ethos. The club has recorded more shots on average (16) than any other side in the league. The man responsible for finding the back of the net is Martin Harnik. He arrived from title rivals Stuttgart last summer and will, no doubt, want to see his new side take the crown come May. The penultimate game of the season shall be against the aforementioned VfB Stuttgart (when? Try to be specific. This could be a winners-take-all situation. 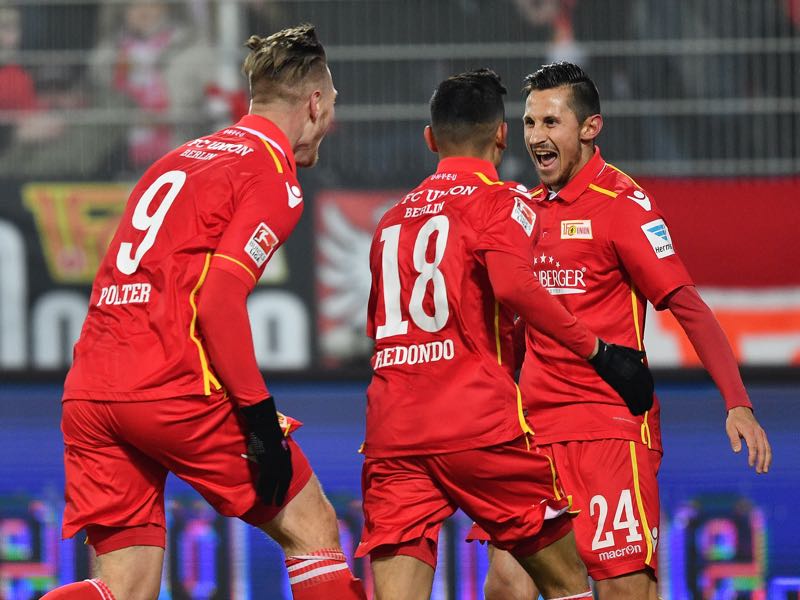 There has been a lot to celebrate for Union Berlin in the promotion race. (Photo by Stuart Franklin/Bongarts/Getty Images)

While living in the shadow of their cross-city rivals, Hertha, Union have put together a solid run toward the top three positions. With one loss in their last eight games, head coach, Jens Keller, is using his experience from a two-year stint in charge of Schalke. At one stage in the season, the top 3 seemed to be pulling away but, with the recent poor form of Braunschweig and Union’s consistency, that has changed. Union are now one point ahead of Braunschweig, and they now do have the momentum on their side. Union Berlin are known for having passionate and alternative fans and they would enjoy nothing more than a derby in the Bundesliga.

While at first glance you might think the player to watch out for is Felix Kroos, not just because of his Madrista older brother but because of his previous talent of the year in Mecklenburg-Vorpommern award. Austrian right back, Christopher Trimmel with his impressive reading of the game, strong aerial presence, and dangerous cross accuracy has caught the eye. In the coming weeks expect to see Eiserne move into that third and final promotion spot. They now have the edge in the promotion race, and therefore do not be surprised to see die Eisernen remain in that third spot for the rest of the season. 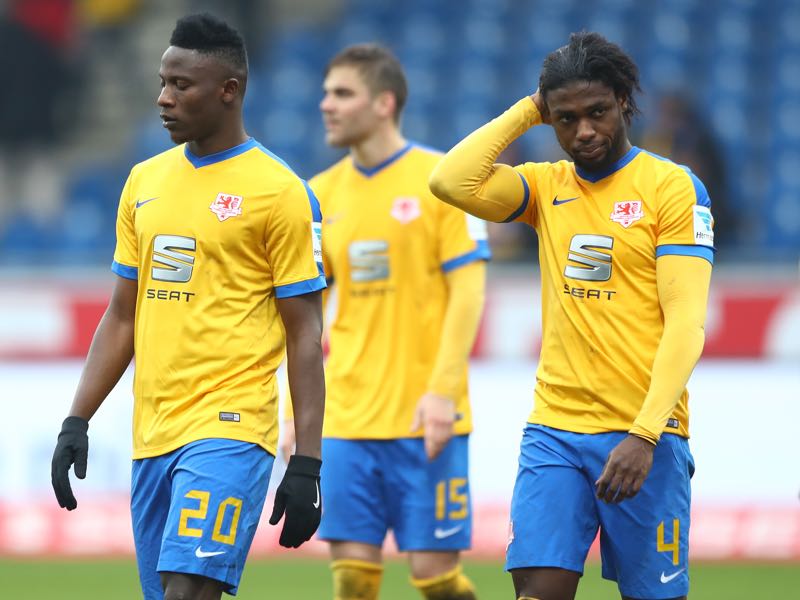 Braunschweig’s trajectory in the promotion race has been pointing downwards. (Photo by Martin Rose/Bongarts/Getty Images)

The Lions have been the surprise package this season in Bundesliga 2. Under the guidance of two former players in head coach, Torsten Lieberknecht, and sporting director, Marc Arnold, the town of Braunschweig has been home of one of the most entertaining clubs in Bundesliga 2.

They are efficiently run, with progress through consistency the main aim. After finishing eighth last season, they dominated the top of the league in the first half of this season. Unfortunately, their form has dipped recently, with only 1 win in 7 games, including a loss to the then bottom side, St. Pauli. Even though 2017 hasn’t started off with as much positivity as the previous months, Eintracht still remain the league’s strongest side at home winning eight out of eleven, and scoring 23 in the process.

It’s been reported that the club’s aim is to be amongst the top 25 in Germany, so promotion may not be as high as priority as for some of the other sides in the division but, given the opportunity, the fans would love to see the likes of Bayern München and Borussia Dortmund at the Eintrach-Stadion. Playing these teams on a regular basis would be this generation’s equivalent of the 1967-68 European cup run. Shall we see it happen? I would be surprised, but for now let’s keep dreaming. 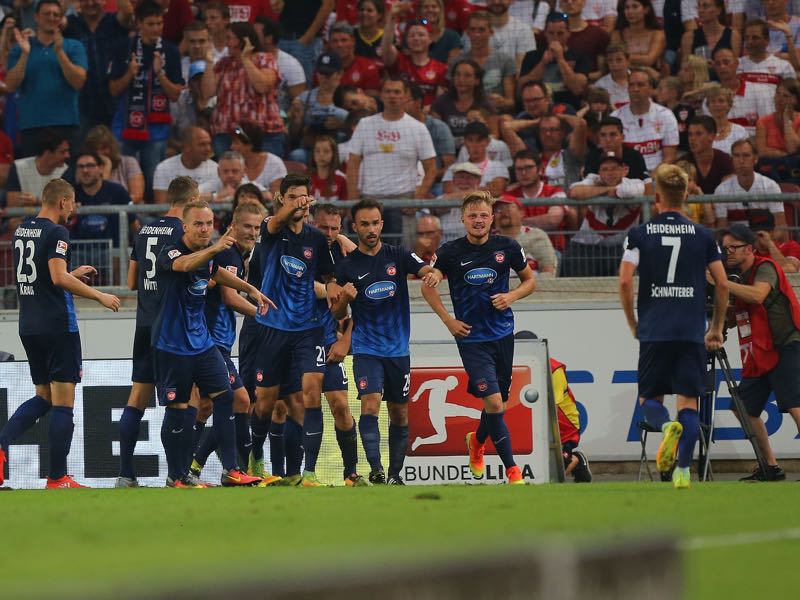 The team of Heidenheim celebrates during the Second Bundesliga match between VfB Stuttgart and 1. FC Heidenheim 1846 at Mercedes-Benz Arena on September 9, 2016 in Stuttgart, Germany. (Photo by Thomas Niedermueller/Bongarts/Getty Images)

Since the winter break, the South Western side have lost three of their four games—two of which were at home. Heidenheim have been one of the surprise success stories of the league campaign due to their relatively small club stature (demonstrated by having one of the smallest stadiums with15,000 capacity).

On the pitch, they have utilised set pieces as their main point of attack, scoring ten of their 31 goals in this way—not including penalties. Marc Schnatterer has been pivotal for this, as the winger has scored eight and assisted eight. Keeping him fit and in form will be vital, ahead of any promotion challenge. While it’s always fantastic to see the smaller teams rise up and battle those who are larger and better funded, sides promotion might come too early for Heidenheim. This season, however, could provide the club with a solid foundation for the future. 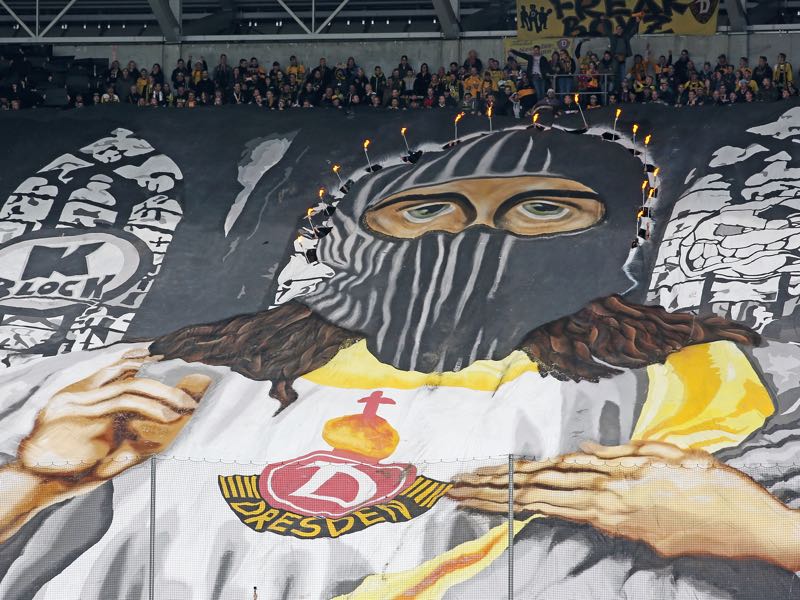 Supporters of Dresden show a big banner during the Second Bundesliga match between SG Dynamo Dresden and VfB Stuttgart at DDV-Stadion on October 15, 2016 in Dresden, Germany. (Photo by Matthias Kern/Bongarts/Getty Images)

This is one of the best-supported teams in the league and is quite often a neutral favourite for the atmosphere created in the Stadion Dresden. Their K Block situated fans is similar to the famous Yellow Wall of Dortmund. The East German side had plenty of success in Europe and domestically before the reunification, but since then have struggled to reach such heights.

Between the years of 1991-95 they played in the Bundesliga but only managed a record high finish of 13th place before dropping down the divisions. This year they are fresh from a Liga 3 title and promotion and have continued to play strongly. Their possession style football under head coach, Uwe Neuhaus, has them taking to the field with confidence.

Promotions in successive seasons may be a big ask if the club wish to stay in the Bundesliga for longer than a single season, however, they should not be ruled out of the promotion race. The atmosphere of tremendously rapturous support at their home games would be a welcome addition to the league. The most successful side in East Germany history, seems an unlikely promotion candidate and, in fact, a top half finish will be seen as a success.