Bundesliga – Team of the Week – Matchday 23

Bundesliga – Team of the Week – Matchday 23 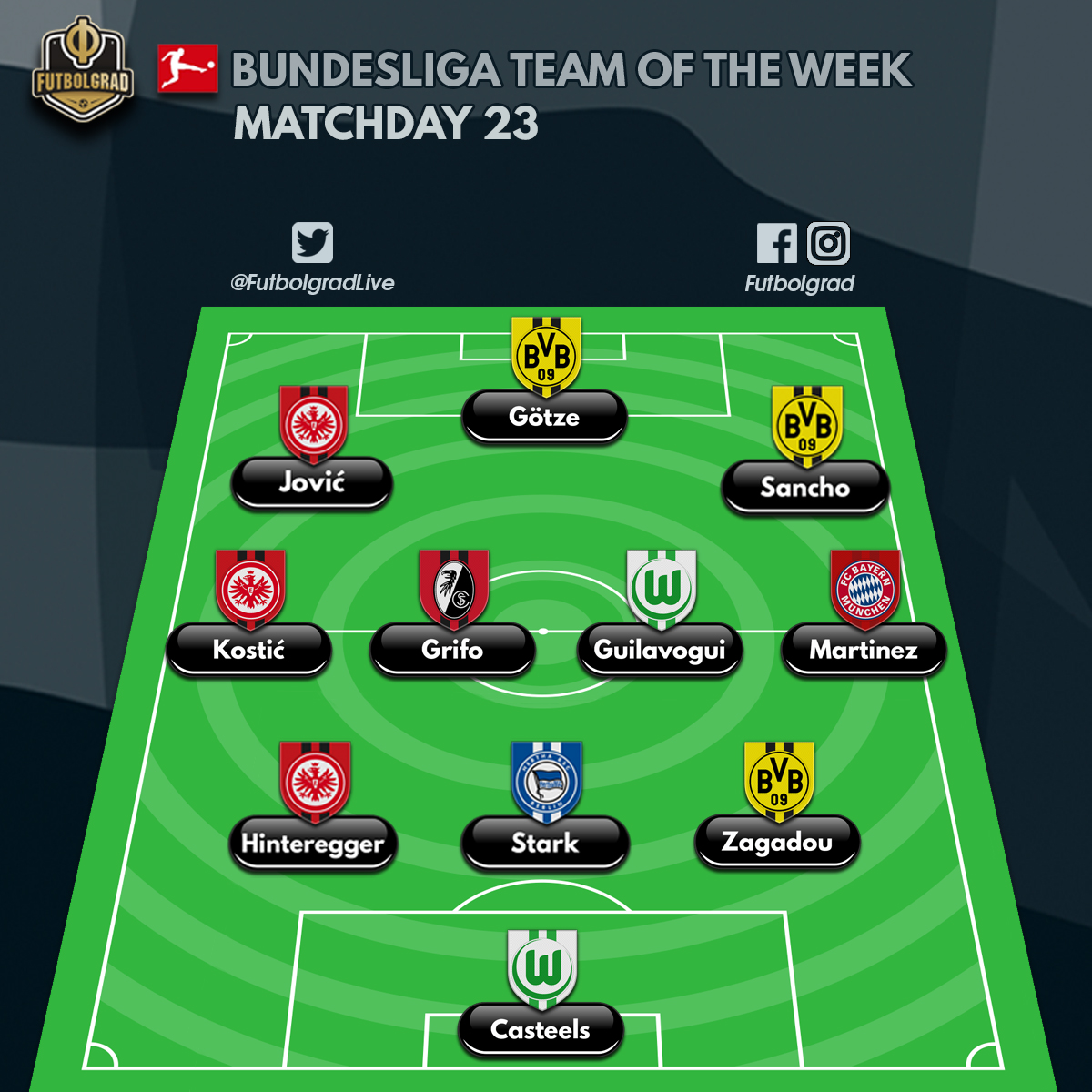 Putting together a team of the week can be difficult as finding Russian singles online. What was not a difficult choice, however, was selecting Wolfsburg keeper Koen Casteels, who was the keeper of matchday 23. The Wolves are within striking distance of a Champions League spot after defeating Borussia Mönchengladbach on matchday 23. Keeping a clean sheet against one of the most prolific striking units in German football is no small feat but Koen Casteels, not for the first time this season, was excellent. Consistent throughout the season it is no surprise that the 26-year-old Belgian keeper is considered a hot property in the upcoming summer transfer window.

Two defenders that made the matchday 23 team of the week will also be part of summer negotiations. Frankfurt’s Martin Hinteregger was once again excellent as his side is back to winning ways after a 3-0 victory over Hannover. Hinteregger is on loan from Augsburg and Frankfurt are interested in making the deal permanent. Meanwhile, Niklas Stark was fantastic as his side came close to getting a point against giants Bayern München at the Allianz Arena. The centre-back, in fact, has been linked with a move to the Rekordmeister this week. Finally, Dan-Axel Zagadou was in fantastic form for Dortmund against Leverkusen; his goal ultimately paved the way to end Dortmund’s four-game winless streak.

Filip Kostić has been identified as one of the players that need to step it up for Frankfurt to become less dependent on the fantastic three up front: Luka Jović, Sebastien Haller and Ante Rebić. On matchday 23 Kostić did just that — the winger was among the best players for Frankfurt and also scored in the 90′ minute to put the game out of reach for Hannover. He also assisted when Luka Jović made it 2-0 for an altogether fantastic performance. Speaking of fantastic performances, Freiburg were brilliant against Augsburg on matchday 23 beating the Fuggerstädter 5-1. Vincenzo Grifo was a big part of that success. On loan from Hoffenheim, Grifo returned to Freiburg to regain his form and he seems to be doing exactly that under head coach Christian Streich.

Speaking of regaining form. Bayern’s Javi Martínez seems to have resurrected his career in a short two games. The Spaniard anchored Bayern when they faced the Red storm at Anfield by keeping together Bayern’s midfield. Then on Saturday, he repeated the trick against Hertha, adding a goal on top of another brilliant performance. It is no surprise that Bayern have now walked away from any plans to sell the Spaniard this summer. Finally, Josuha Guilavogui complements our midfield after keeping together Wolfsburg’s midfield against Gladbach.

Frankfurt’s Jović is once again back in the team of the week after another stellar performance. Given that Jović leads the league with 15 goals it is no surprise the Serbian has already been linked with a big money move to a club like Barcelona. The front three is complimented by Borussia Dortmund duo Mario Götze and Jadon Sancho. Götze has been one of the few bright spots during Borussia Dortmund’s mini-crisis and was once again brilliant this week against Bayer Leverkusen. In fact, he harmonised well with English, super talent Jadon Sancho, his goal made him the youngest Bundesliga player in history to score nine goals, a record that was previously held by 2014 FIFA World Cup winner Lukas Podolski.

For more on the Bundesliga matchday 23 team of the week listen to the latest Gegenpressing Podcast!