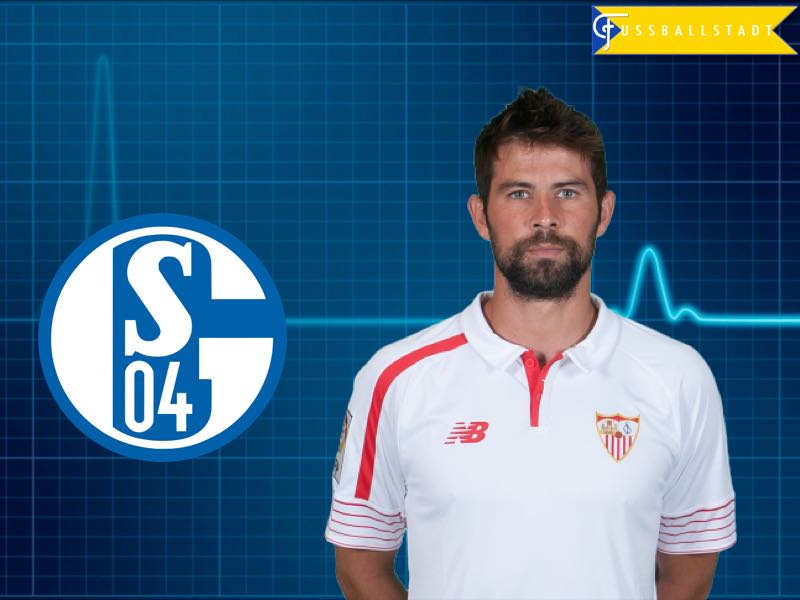 Schalke must be wondering just who has the voodoo doll, who is the architect of the bewitchment that has plagued them. The return of Coke from injury in early March, and the signing of key players could give the club a massive advantage going into the second half, however.

Having earned a respectable fifth place finish in last season’s Bundesliga, and with it qualification for the Europa League, die Knappen looked to strengthen over the summer of 2016—fighting across three competitions was the goal, to land a trophy was not an insurmountable prospect.

The capture of Jorge Andújar Moreno, more simply know as Coke, from Sevilla FC was a sign that Schalke meant business. They had managed to tempt a two-time European champion from his homeland; fresh from the demolition of Liverpool in the Europa League Final in Basel—Coke not only captained champions Sevilla he scored two wonderful goals. Schalke had brought in real quality and by doing so they had made a bold statement to the rest of Germany. The top 4 was now an achievable aim, not just a dream.

However, within a matter of weeks we were to witness the continuation of something all too familiar for Schalke—they once again became ein Verfluchter (condemned club).

Coke, the man who had been brought in to lead the line, suffered a horrendous injury—sustained during his debut against FC Bologna in a pre-season friendly—damage to his posterior cruciate ligament in his right knee. Before it had begun season 2016-17 couldn’t have started any worse for Schalke.

It was to become an unfortunate meeting of words, the start of what went on to become a monthly statement, even now as we approach the Rückrunde, “Schalke suffer injury setback”.

The latest player to catch the curse of Gelsenkirchen is left-back Abdul Rahman Baba who has been side-lined, possibly, for the remainder of the season. Baba has undergone surgery after he suffered knee ligament damage whilst on international duty with Ghana at the Africa Cup of Nations.

Schalke had a whole squad of injuries

Sandwiched between Coke and Baba is an injury list that no club would want:

Schalke fans will be acutely aware of the curse they have—no less than 18 players have suffered long-term injuries since 2014. At one point this season they had a record eight players unavailable for selection from what would have been a very strong 11. 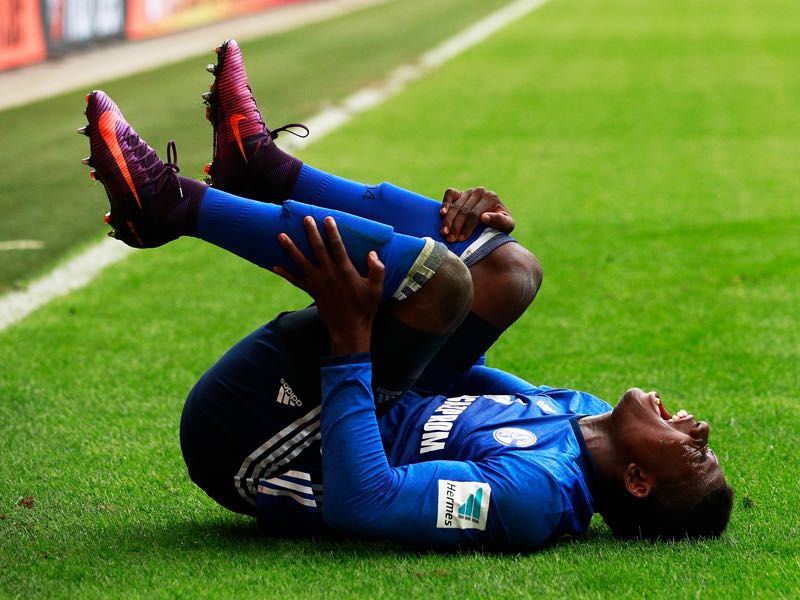 Breel Donald Embolo of Schalke 04 is injured by Kostas Stafylidis of Augsburg during the Bundesliga match between FC Augsburg and FC Schalke 04 at WWK Arena on October 15, 2016 in Augsburg, Germany. (Photo by Adam Pretty/Bongarts/Getty Images)

Matchday 5 was the low point, routed to the bottom of the table and beset by injury the season that promised so much now took on a look of danger. However, to Markus Weinzierl credit he dragged Schalke back to a respectable tenth by the completion of Matchday 17.

Matchday 18 will witness the visit of Eintracht Frankfurt to the Veltins-Arena. Under the cameras on a Friday night Schalke will look to build on a late winner against Ingolstadt as they face an Eintracht taken apart with ease by RB Leipzig during Saturday night’s Topspiel. Die Adler will be without playmaker Marco Fabián, hip injury, and Goalkeeper Lukas Hradecky, suspended, but it is with Schalke where the pressure will lie.

A player who won’t be feeling any such pressure will be new striker Guido Burgstaller who opened his Bundesliga account with a goal on his debut. Burgstaller, touted by many as an odd signing, has silenced any doubts about his potential by netting late on against Ingolstadt.   Should Schalke wish to get back into the European places then the form Burgstaller displayed at 1. FC Nürnberg will be critical as die Knappen look to carry their pre-winter break form into the Rückrunde.

With Europa League football on the horizon it is another January signing that may hold the key to Schalke’s plans for Champions League football next season. Holger Badstuber, another player accustomed to more time on the treatment table than the pitch, will look to bring all of his Bayern München experience to the Veltins-Arena.

Schalke also acquired Daniel Caligiuri from league rivals VfL Wolfsburg on Wednesday. The signing of Caligiuri, like it was the case with Burgstaller and Badstuber, is another response to the clubs injury woes. At the same time Caligiuri’s experience should be a massive asset in the club’s Europa League campaign.

Having been drawn against PAOK in the Round of 32 Schalke have a real opportunity of moving into the last 16 with ease. The Superleague Greece runners-up should provide little resistance to even the most decimated of Royal Blue’s squads.

The Europa League becomes a real prospect for Schalke to add silverware to a season that has so far been a disappointment. With fellow Bundesliga side Gladbach being handed a tricky draw against Fiorentina and other strong sides such as Villarreal facing touch opposition it is Schalke who have a real opportunity to go all the way to Stockholm in May.

Coke could become key in the club’s Europa League aspiration

Schalke will have one eye on history as this season marks the 20th anniversary of their famous UEFA Cup victory against Inter Milan. Buoyed by memories of that famous night in the San Siro which saw Schalke crowned European champions—in what was to be the last two legged UEFA Cup Final before the inception of one off games at a neutral venue—die Knappen will see the Europa League as the more realistic route back into Champions League football than an all-out, almost impossible, assault on fourth place in the Bundesliga. 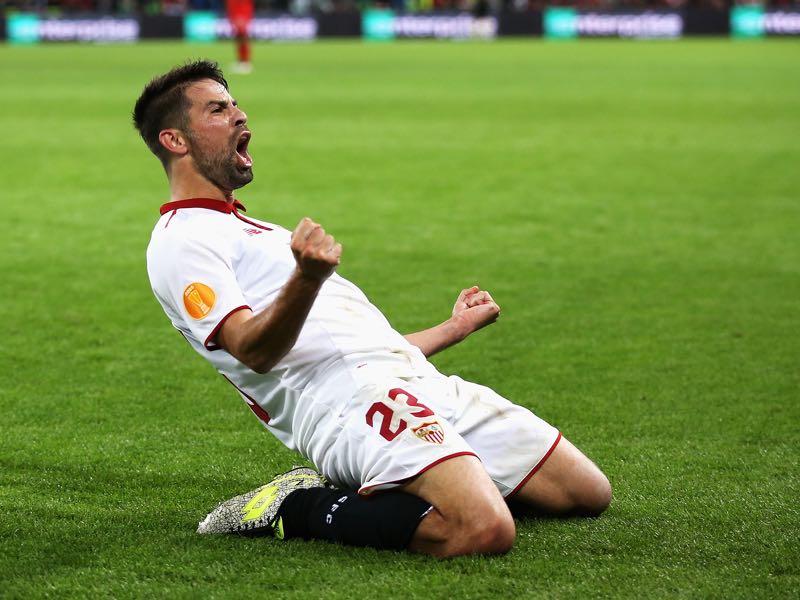 Coke was the man of the match in the UEFA Europa League final in Basel. (Photo by Lars Baron/Getty Images)

Should Badstuber be able to remain injury free, at the club with so many injuries, then Schalke will have a defender to lead the back line. Caligiuri is a versatile player, who should be able to replace several of the players that are currently out with injuries, and much is expected from Burgstaller, who has shown his goal scoring prowess in the Bundesliga 2.

Could Coke’s return hold the key to Schalke’s new look shape and provide that final piece in a spine that could promise so much. With Coke saying himself that it “would be a mistake to put myself under pressure to return by a certain date” Schalke must wait a little longer whilst also praying that the bewitchment of the injury curse is lifted soon.