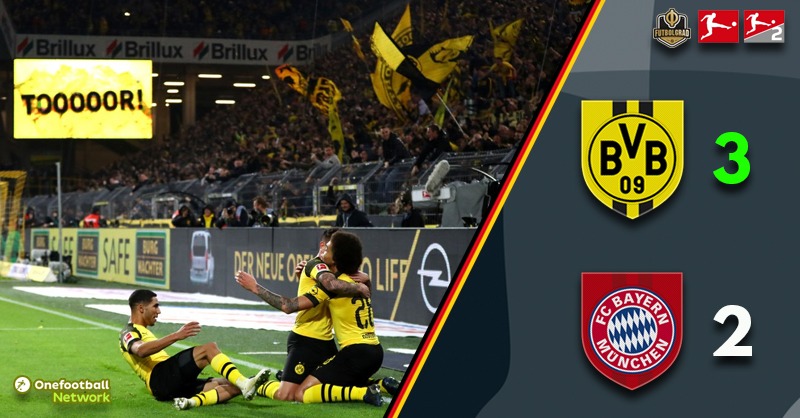 A changing of the guards? Dortmund come back twice to beat Bayern

The top match Dortmund v Bayern lived up to the billing. Bayern dominated the first 45, but Dortmund worked their way back into the match and eventually won a game that saw breathless end to end action.

It was a nervous start by Dortmund. Bayern, in turn, looked up for it and aggressively pushed Dortmund into their half. Nonetheless, it was Dortmund with the first chance in the 10′ minute. A long ball from the back found Marco Reus, the attacking midfielder broke forward but his shot from 18 yards was too centred and an easy stop for Manuel Neuer.

Bayern bossed the possession in the opening 15 minutes, and most of the play took place in Dortmund’s half. But whenever Dortmund did break forward, they looked the more dangerous side. That is not to say that Bayern did not have chances. In the 15′ minute Frank Ribery mishit a volley inside the box, and in the 18′ minute Serge Gnabry saw a shot blocked at the last second by Manuel Akanji.

In the 27′ minute, Bayern took the deserved lead. Dortmund allowed the two wingers on either side to much room, and Gnabry made use of that space on the right crossing in a fantastic ball to the centre where Lewandowski showed all his class to head home the lead for the champions. Bayern had further chances in the 34′ minute Frank Ribéry benefited from a Lukasz Piszczek and was allowed a free shot inside the box forcing Marwin Hitz into a fantastic stop.

Bayern looked good for their lead going into the halftime break and should have perhaps carried a bigger lead into the second half.

Dortmund were then handed a massive lifeline to start the second half. In the 46′ minute, Marco Reus stormed into the box and while he was trying to round Neuer was brought down. Referee Manuel Gräfe pointed to the spot, Reus stepped up and sent Neuer into the wrong corner.

The Bavarians were only briefly shocked, however. Joshua Kimmich was given to much room on the right played a ball to Gnabry, who returned the ball to Kimmich and his lopped-cross inside the six-yard box found Lewandowski’s head, and the striker made no mistake to score his second.

It was now back and forward. In the 59′ minute Jadon Sancho finally broke through on the right and found Reus unmarked at the centre, his shot beat Neuer, but Kimmich had rushed back to clear the ball off the line. In the 61′ minute, Sancho beat Hummels in a foot race broke into the box and passed the ball to the centre where Paco Alcacer failed to beat Neuer, the rebound landed at Reus’ feet, but Neuer rushed across and saved that ball as well. In the 64′ Reus missed another one this time his shot, after an Achraf Hakimi cross, curled past the far post.

The goal was coming, and in the 66′ minute it finally arrived. A low cross to the centre by Piszczek found Reus, and this time he would not be denied as his volley from 12-yards out beat Neuer.

It was now breathless stuff by both sides. Bayern were pressing high to get the lead once again allowed Dortmund to counter and that is how the Black and Yellows would score their next goal. Ribéry lost the ball deep in Dortmund’s half to Axel Witsel, who quickly broke forward and then spotted Paco Alcacer at the centre, the Spaniard had acres of space and kept his composure to beat Neuer in the one-v-one.

Dortmund had turned the game around after going down twice, taking the wind out of Bayern’s sails. As the minutes ticked past Bayern became more desperate, and when Gräfe awarded an extra five minutes, Bayern finally started to press for the equaliser. Seconds were left when Lewandowski had appeared to have scored the equaliser, but the linesman had the flag up, and the goal was waved off.

Marco Reus was the man of the match. Identified as Dortmund’s key player ahead of the match the Dortmund captain led the charge for Dortmund after a first 45 minutes to forget. Reus not only produced the penalty that led to the first equaliser but also shouldered the responsibility to send the ball across the line. He then had several chances to equalise once again after Bayern took the lead for the second time, but he never gave up and eventually scored with a fantastic volley to make it 2-2. Reus also won nine out of his 12 duels and defensively won four out four tackles.

Is this the changing of the guards? Borussia Dortmund are now seven points clear of serial champions Bayern München. Bayern are currently third in the standings and could drop to fifth if Leipzig and Frankfurt win their respective games on Sunday. CEO Karl-Heinz Rummenigge was spotted texting on the stands leading to jokes that he was messaging a potential Niko Kovac replacement. But given that there are not many candidates out there that could replace Kovac at the moment it seems unlikely that Bayern will fire their head coach. Instead, expect a changing of the guards inside the dressing room as Bayern could kick-start their squad rebuild a bit earlier than expected.