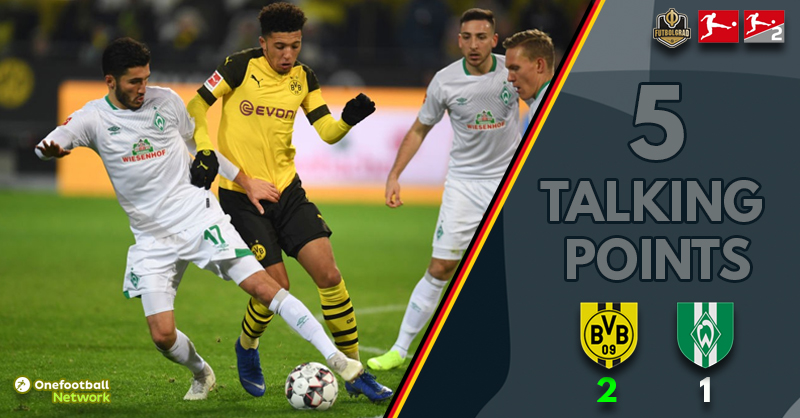 Westfalenstadion – Borussia Dortmund v Bremen ended 2-1 extending BVB’s lead in the Bundesliga to nine points. Paco Alcácer and Marco Reus gave Dortmund a 2-0 lead in the first half, Max Kruse pulling one back for the visitors who pushed the Yellow and Blacks all the way.

Efficient Dortmund get it done

Borussia Dortmund started the match well and deservedly took the lead after Paco Alcácer headed in Raphael Guerreiro’s free kick. A swift counter-attack saw Marco Reus sweep home Jadon Sancho’s cross in the 27thminute to make it 2-0, and it appeared the home side could be on their way to a convincing win.

The floodgates failed to open, however, Max Kruse getting a goal back soon after and Werder Bremen putting pressure on Dortmund early in the second half. Dortmund had a goal ruled out for offside with the last kick of the game, but a 3-1 score might have flattered the hosts.

In the end, it was another efficient performance from Lucien Favre’s side who did enough to collect all three points.

Alcacer shows his worth

Paco Alcacer’s incredible scoring rate off the bench has been much talked about, some apparently suggesting he might not be as effective as a starter. It’s a ridiculous proposition, and Alcacer proved just how much better Dortmund are when he is on the pitch with a man of the match performance.

An early chance from the Spanish striker was cleared off the post by Davy Klaassen before setting up Marco Reus. A shot from a tight angle followed before Alcacer headed in Guerreiro’s free-kick to give Dortmund the lead. 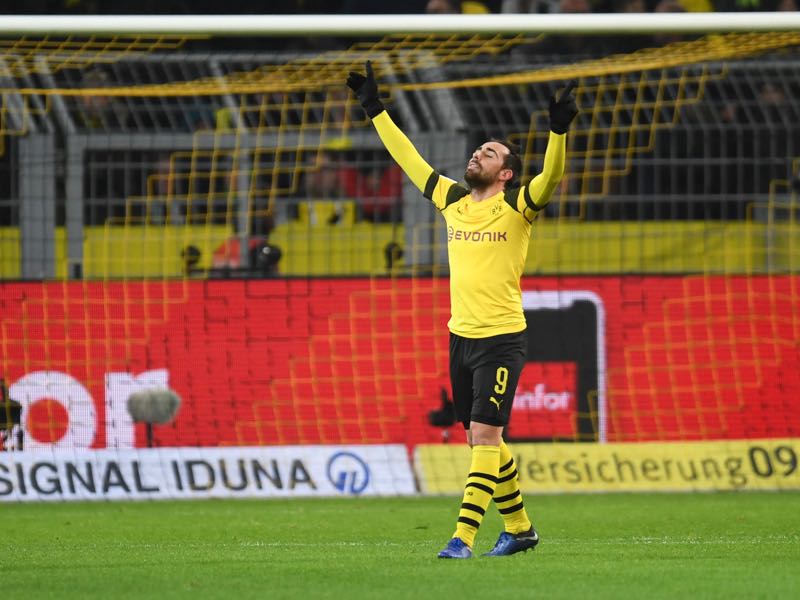 The former Barcelona striker was involved in Dortmund’s second goal before setting up Jadon Sancho who shot wide. Alcacer was involved in a number of promising attacks before a delicious through ball put Sancho one-v-one with Jirí Pavlenka making the save.

It was an incredibly sharp piece of business to capture the 25-year-old on a permanent transfer and one can only speculate where Dortmund would be without him.

Borussia Dortmund deservedly sit nine points clear in the Bundesliga with much of the praise justified. However, we shouldn’t forget that they are a work in progress that have enormous room for improvement.

Abdou Diallo played a suicidal back pass in the first half and had a poor clearance early in the second-half that went unpunished. Diallo’s partnership with Manuel Akanji is still in its infancy and can only get better, along with Achraf Hakimi who only recently turned 20.

Thomas Delaney and Axel Witsel need more time to understand their roles and adapt to matches Dortmund are unable to dominate. Jadon Sancho has become a first-team regular, his combination play is exceptional for an 18-year-old, but he will continue to develop.

This is still a new team and a new manager. Favre and his players deserve huge credit for their incredible start to the season but be under no illusions; they will get better which is bad news for the rest of the Bundesliga.

Werder Bremen supporters must have been fearing the worst when Marco Reus put Dortmund 2-0 up. It came after Davy Klaassen was forced off injured after clearing Alcacer’s effort off the post.

However, a fantastic volley from Max Kruse got them back in the game, and they pushed the hosts all the way in a spirited performance. It was a decent follow-up performance after a 3-1 home win against Fortuna Düsseldorf that snapped a five-match winless run in the Bundesliga.

Milos Veljkovic will return from injury and should help a shaky defence while Nuri Sahin returned to the Westfalenstadion and played well in the holding midfield role. There are signs that Werder’s early season form was no fluke and a European spot is still a possibility.

Nuri Sahin was born in Lüdenscheid, a 30-minute drive from Dortmund and spent his junior years at the club before helping Borussia Dortmund win the Bundesliga in 2010-11. Spells at Real Madrid and Liverpool followed before a return to the Black and Yellows in 2013. 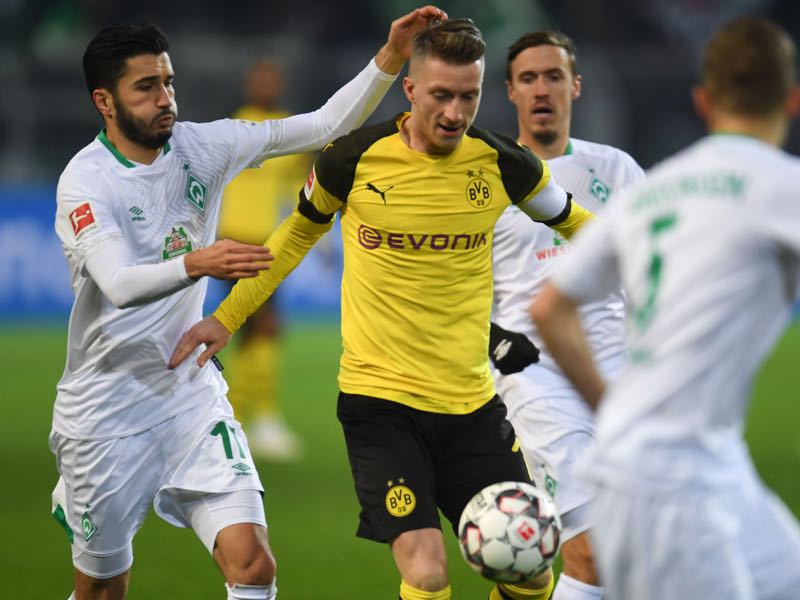 Joining Werder Bremen in the summer, Sahin returned to theWestfalenstadion and received a warm reception from the Südtribüne before kick-off. It was a touching moment with many of the Dortmund faithful able to express their gratitude.

He summed up the match succinctly after the final whistle, saying: “We played well and we had our moments. With a bit of luck, we would have got a point here today, and no one could have said anything. When Dortmund get going, they’re dangerous.”

Sahin played well at his old stomping ground, utilising his experience, positioning and passing range to control the tempo. He has had some bad luck with injuries, but at 30-years-old there is still plenty of petrol in the tank and if he can remain fit, can be a vital player for Bremen in the Rückrunde and beyond.