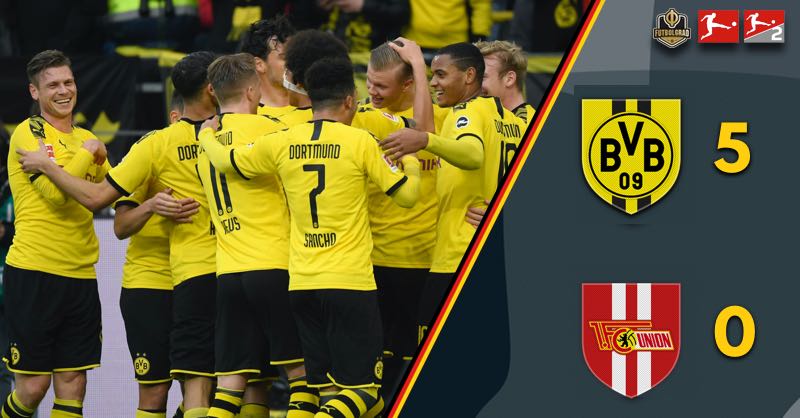 Union Berlin tried to take the match to Dortmund early on. That, however, gave Dortmund room to attack, and in the 12th minute, Jadon Sancho made use of the space to score the opener from a deflection. The Black and Yellows were now flying, and just six minutes later, Erling Haaland scored his sixth of the season to make it 2-0. Dortmund were dominant and had countless more chances but missed out on the third as they were often looking for the extra pass rather than just the simple shot on goal.

Dortmund continued their sloppy attacking play in the second half. Sancho should have added a third early on when Union Berlin keeper Rafal Gikiewicz needlessly gave the ball away. Finally, in the 68th minute, Dortmund scored their third. Haaland was brought down in the box, and Marco Reus stepped up to put away the penalty. Just one minute later Sancho added another assist to his account as he spotted Axel Witsel, who easily scored Dortmund’s fourth. Dortmund, or rather Haaland, were not done yet, the Norwegian scoring his seventh Bundesliga goal in three games with a great strike inside the box in the 77th minute. Shortly, after Haaland came off, without the Norwegian on the pitch Union were finally able to stop the goal flood.

Erling Haaland has scored seven goals on his first eight shots in the Bundesliga. It is impressive how quickly Haaland has been integrated into the Dortmund squad, almost like the team was designed for the Norwegian wunderkind.

On Saturday Jadon Sancho became the first teenager in Bundesliga history to score 25 goals. The 19-year-old is on an incredible run at the moment, he has scored 12 goals and 13 assists in 18 Bundesliga games this season.

Julian Brandt was once again excellent for Dortmund. Playing next Witsel in central midfield, Brandt was the center of all Dortmund attacks.

Dortmund have been in fantastic form since the winter break. For the first time in club history, the Black and Yellows managed to score five goals or more in three consecutive Bundesliga games.

Haaland’s arrival, in particular, seems to have been crucial. The striker was the missing piece in the Black and Yellow puzzle. Emre Can will be another key piece in a squad that now looks poised to challenge for the title.