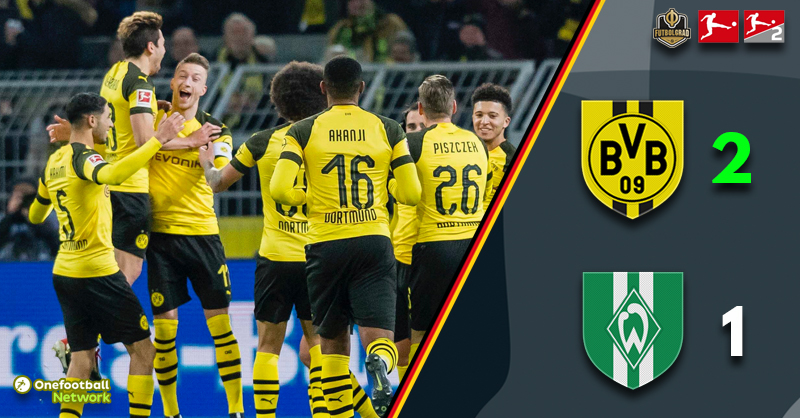 Dortmund vs Bremen was defined by three first half goals in a game worthy of its billing as the Topspiel. The hosts eventual winners as they end 2018 as the Bundesliga Herbstmeisterschaft.

This particular Bundesliga fixture has a reputation for goals and once again it did not disappoint. Under the lights and in front of the cameras, it was everything a Topspiel should be.

Playing wonderful football and sitting top of the pile, it was unsurprising that Dortmund started at the speed in which they did. Paco Alcácer raced through with only six minutes on the clock.

The Spanish forward deftly chipped Jiří Pavlenka in the Bremen goal and the ball looked to be rolling for the far corner – however, Davy Klaassen had other ideas, his covering run and lunge scooped the ball off the line, it was a wonderful last gasp clearance.

It did come at a cost though, the Dutch midfielder hyperextended his knee and then slid into the bar at the back of the net. His evening was over as quickly as it started.

The fixture was only minutes old but Dortmund were in top gear, their fast counter attacks have been a joy to watch – the opening moments to this match were no different.

Alcácer had seen one opportunity saved at the last and the forward looked in the mood to score. He didn’t have to wait long – getting his head onto the end of a Raphaël Guerreiro free kick, the opening goal had gone the way of the home side.

Initially ruled out for an offside decision, it was a VAR interjection that correctly allowed the goal to stand. The striker was clearly onside as he headed the ball.

One soon became two, a defensive error allowed Dortmund to capitalise – once again Jadon Sancho and Marco Reus combined to devastating effect. The English teenager picked out his club captain inside the box and Reus stroked the ball past Pavlenka.

The league leaders looked in control but just as there seemed no way back for Bremen, Kevin Möhwald brought the very best out of Roman Bürki. The Swiss shot stopper got a strong hand to a wonderful half volley by Werder’s midfielder.

This chance gave a new impetus to the visitors play, they began to test Dortmund and eventually their breakthrough came via a rocket of a shot.

Ludwig Augustinsson found Max Kruse unmarked on the edge of the area – the 30-year-old is well known for his ability to strike the ball from distance, and he reminded everyone watching just why. It was a venomous shot that left Bürki helpless to stop it.

As the half drew to a close Werder had pulled themselves back into a game that looked beyond them at the half hour mark.

Florian Kohfeldt must have told his side that Dortmund looked shaken, the visitors came out for the second half like a side unafraid of the home side’s reputation.

With just a one goal deficit, Werder went at the champions elect. Möhwald with two opportunities to level the score inside three second half minutes – the Green and Whites just couldn’t find a way past Bürki to claim their equaliser.

Bremen’s assault on their host’s goal opened up the space for Dortmund to display their phenomenal counter attacking ability. Reus, Sancho and Thomas Delaney all threatened to add a Schwarzgelben third – but like their opponents they couldn’t find that final moment of quality to add to the scoreline.

Mario Götze a late substitute, thought he’d found the net in added time however, VAR showed its worth again – an offside decision correctly called on review.

Dortmund vs Bremen – Man of the Match

Marco Reus is enjoying a renaissance under the leadership of Lucien Favre. Not only is the 29-year-old the focal point of the side, he is also enjoying an injury free run of games for the first time in a long time.

His linkup play with Jadon Sancho is a joy to watch and this evening was no different, his well taken goal the ultimate difference between these two sides.

Dortmund are the Herbstmeister, the half season champions – but can they be continue their wonderful form into 2019 and win their first title for six years?

While devastating in attack they still look vulnerable at the back, especially when faced with a quality side – but you can’t dispute just how good they are when driving forward.