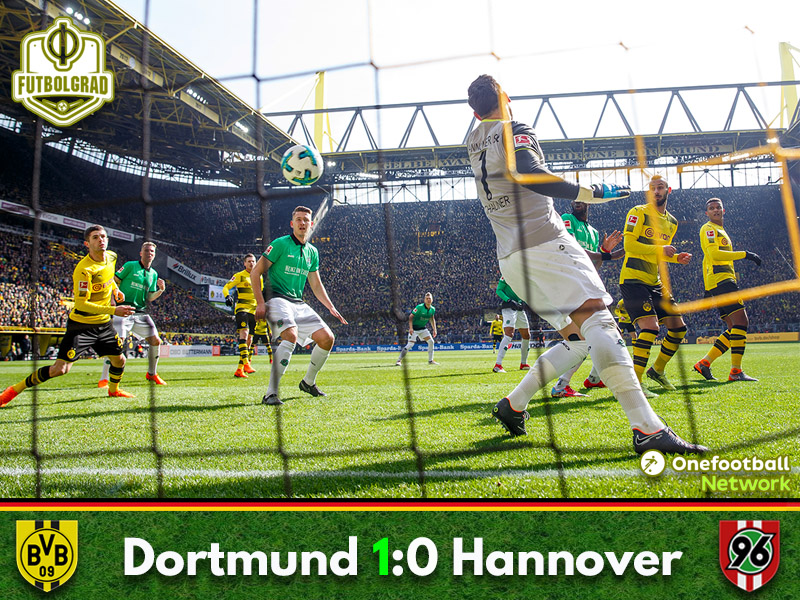 Signal Iduna Park hosted Dortmund vs Hannover. With the embarrassment of falling out of Europe to FC Salzburg midweek, Borussia Dortmund needed a big response as they returned to Bundesliga action on Sunday afternoon. Marco Reus missed out after picking up a muscular problem on Friday – “He has nothing bad, we hope he will be able to continue after the international game break” Michael Zorc told the waiting press prior to kick off.

Peter Stöger would have wanted a quick start to this game, under pressure from many angles the Austrian needs a faultless season run in to give him any chance of being in the Westfalenstadion dugout next season. It was almost a dream start, from the kick-off Michy Batshuayi pounced onto a wonderful through ball to slide his shot past Philipp Tschauner in the Hannover goal – unfortunately for the Belgian attacker, the ball rebounded off the upright. Neither Mario Götze nor Christian Pulisic could find the right tough from the pinball follow up, for a game that had never seen a nil-nil draw it was the perfect start to proceedings.

Dortmund didn’t have to wait long until their next sight of goal, Hannover looked to be caught in the bright sunlight whilst frozen to the turf. André Schürrle fired a spectacular volley towards goal after a mistake by Salif Sané. Moments later Gonzalo Castro forced Tschauner into a reactionary save, pushing the ball away for a corner. Schürrle whipped the set piece in and Batshuayi denied in the first minute – was to make no mistake this time, with an audacious mid-air backheel the 24-year-old had his sixth Bundesliga goal as the clock approached the half-hour mark.

Hannover for their part struggled to show any sort of composure until the 40th minute – but the Dortmund backline was equal to it. Lukasz Piszczek and Ömer Toprak equal to anything the Red’s front three could sporadically throw at them. When the half-time whistle came the hosts should have been three clear, on the whole it was the half and response that Stöger would have wished for.

As superb a half as Dortmund had, they needed a second goal – quickly – as the second half kicked off. This would settle not only the players’ nerves but also those packed into the Westfalenstadion. The hosts have a tendency to leak calamitous goals just when they look to be on top and so this circle almost completed itself on 47 minutes. A deep cross from the left had Roman Bürki stranded but Niclas Füllkrug could only head his chance back into the box and not into the goal, it was a warning for Dortmund.

Dahoud, Schürrle and the opening goalscorer Batshuayi all went close in a five minute period of domination – Jonathas tried to add balance to the fixture, his two chances in two minutes for Hannover should have resulted in a goal. For all their possession Dortmund couldn’t find that crucial second goal whilst their visitors began to make the fixture end to end – as the hour mark passed the game was closer than it should have been.

Stöger looked to Julian Weigl to add some composure in the midfield on 65 minutes. The 22-year-old rested midweek for the trip to Austria replaced Castro – Dortmund needed to deal with the threat Matthias Ostrzolek was beginning to pose for Hannover.

As Dortmund adjusted to the substitution Hannover should have punished their hosts – Pirmin Schwegler fired in a dangerous cross and Marvin Bakalorz met it with a well-taken volley, his acrobatic effort could only find the arms of Bürki – it was a clear sight of goal for the midfielder and he should have done far better.

The hosts pushed on for a second, but it just wouldn’t come – substitute Maximilian Philipp came the closest on 88 minutes, the second Dortmund player of the afternoon to rattle the post. Seconds later Batshuayi had another opportunity but heroic closing down by Sané ensured the striker was blocked at the last.

Dortmund vs Hannover – Man of the Match:

Restored to the Bundesliga starting lineup, Batshuayi built upon his two goals from the bench against Eintracht Frankfurt to grab the winner this afternoon. Hitting the post with just 45 seconds gone he could have quite easily found himself with another brace. If Dortmund wish to catch neighbours Schalke, pipping them to second place, they will need the firepower the Belgian brings. 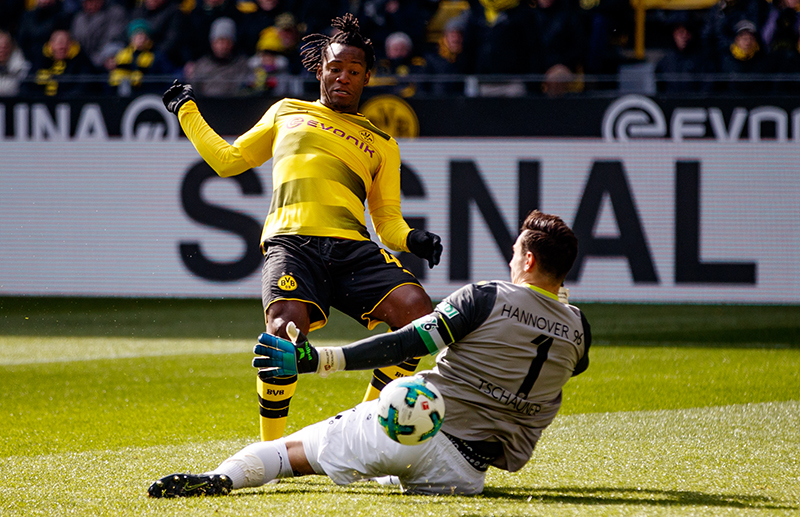 Michy Batshuayi of Dortmund is challenged by Philipp Tschauner of Hannover during the Bundesliga match Dortmund vs Hannover. (Photo by Lars Baron/Bongarts/Getty Images)

Dortmund needed a response and they gave one. Much more creative than witnessed in recent weeks they should have really finished the game with more than just the one goal that was registered. As the season reaches its finale any other result than a second-placed finish could see Peter Stöger move on.