On Friday night Borussia Dortmund dropped two points in spectacular fashion against Paderborn. For Bayern, that meant that they could increase the gap to their biggest rivals to four points with a win over Fortuna Düsseldorf. The Bavarians were quickly in the driver’s seat after Benjamin Pavard tapped home a Joshua Kimmich cross in the 11th minute. Fifteen minutes later, the game was wrapped up. Zack Steffen gave the ball away to Thomas Müller; he spotted Gnabry, who then set up Corentin Tolisso for a beautiful goal. Bayern were rampant now, and in the 32′ minute, Gnabry made it 3-0 with a short-range tap-in.

Bayern were now cruising and continued to make it look easy in the second half. But even cruising Bayern remained dangerous. In the 71st minute, Lewandowski broke away on the left, dribbled into the box and set up Philippe Coutinho to make it 0-4. It was the final act of a game in which Bayern were always in complete control. Perhaps the only negative? After he managed to score in the first 11 games of the season, Robert Lewandowski’s goalscoring streak came to an end. 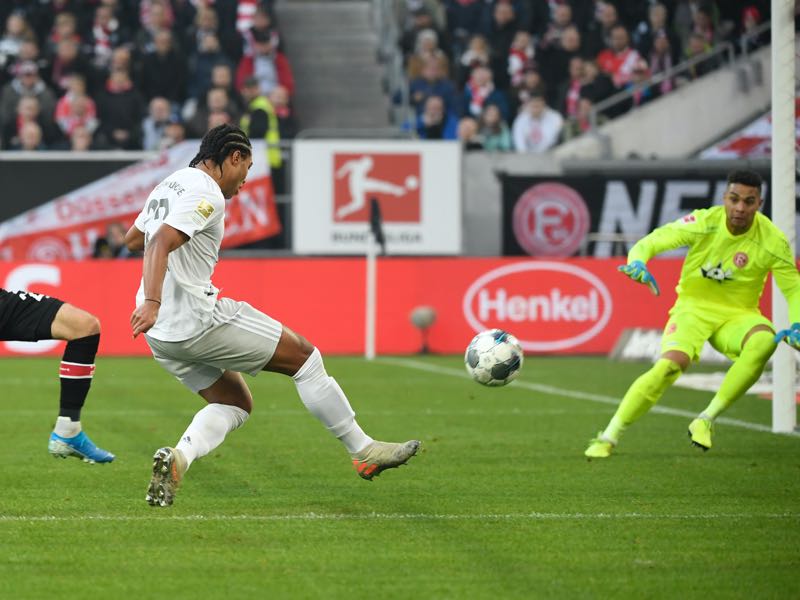 Gnabry only needed to be on the pitch for 63 minutes today to have an impact. Gnabry effectively put the game away in the 32nd minute when he made it 3-0. The forward also set up Tolisso’s goal five minutes earlier. Gnabry had 64 touches, completed 88.9% of his passes, and won three out of his four dribbles.

The French defender scored the opening goal in the 11th minute (although some outlets awarded the goal to Kimmich later). But it was Pavard’s play out of the back that was impressive. Often criticized this season, Pavard often joined the rush when Bayern broke forward but also had 102 touches and completed 89.2% of his passes.

Steffen was identified as the key player for Fortuna Düsseldorf by his head coach Friedhelm Funkel. But Steffen struggled at times, his poor pass out of the back led to Tolisso’s goal in the 27th minute. Then ahead of Coutinho’s goal, he could not intercept Lewandowski’s cross. The game highlights that despite all the positives this season, Steffen still has to gain some much-needed experience.

An important win for Bayern Munich. With Dortmund dropping points yesterday and Gladbach today, Bayern are within one point of first place.

The game also continued a positive trend under interim Hansi Flick. Flick has stabilized the side since taking over from Niko Kovač and even managed to integrate star Philippe Coutinho in this game and once again records a clean-sheet. Good numbers for Flick, who will look to hang on to the position as long as possible even with Mauricio Pochettino available.