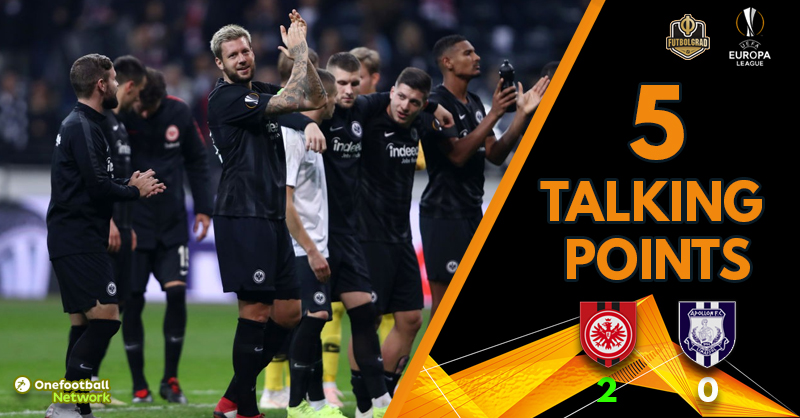 Commerzbank-Arena — Eintracht Frankfurt tightened their grip on Group H in the Europa League with a commanding 2-0 win against Apollon Limassol. Eintracht Frankfurt v Apollon was in all facets dominated by the Eagles, who scored two first-half goals. Eintracht have taken nine points from their opening three games and only a disaster of epic proportions will stop them from reaching the knockout stage.

Eintracht Frankfurt began on the front foot early and deservedly took the lead courtesy of a goalkeeping howler. Sebastian Haller released Kostic whose tame shot appeared harmless enough, Bruno Vale somehow letting the ball through his legs and over the line.

Haller continued where he left off against Fortuna Düsseldorf, impressive holdup play that continually brought his teammates into the action. He would make it 2-0 in the 32′ minute, heading in Evan Ndicka’s pinpoint cross which made it three goals and six assists in his last four starts.

Frankfurt’s high press allowed them to stay on the front foot with Apollon unable to get out of their own half for most of the match. The Cypriot club hit the bar late on, but it was men against boys and the margin should have been far greater.

It would be easy to write off Apollon Limassol as far inferior to Frankfurt, but they showed they can compete in the 2-1 loss at Lazio and the 2-2 home draw against Marseille. Emilio Jose Zelaya scored in both games, came off the bench at half-time here but couldn’t get Apollon back in the match.

In truth, this is a team that struggles on the road in Europe, Sofronis Avgousti’s side losing seven of their last eight away matches in the competition. If they want to have any chance of getting to the knockout stages they must learn to compete on the road.

Frederik Rönnow got the start in goal and hardly had a save to make as Apollon were kept at arm’s reach. It was another strong team performance from Adi Hütter’s side who are improving from week to week.

The strike force of Haller, Rebic and Luka Jovic is lethal and one of the most feared in Germany. Mijat Gacinovic, Ante Rebic and Filip Kostic combined very well on the left wing in the first half with the visitors having no answers.

Frankfurt have won their last four home matches in all competitions, scoring 17 goals in the process and brushing sides away with ease. The home support at the Commerzbank-Arena is one of the most passionate in the Bundesliga and they are turning it into a hostile venue.

Flares and a fantastic choreography ahead of the match set the tone at the Commerzbank-Arena early on. The Europa League is often considered a second-rate competition by many fans but Eintracht fans have embraced the competition and have been rewarded by a fantastic response from their team.

Eintracht Frankfurt v Apollon – The road ahead for Frankfurt

Danny da Costa and David Abraham were subbed off after picking up knocks, but there is sufficient depth in the squad to handle a congested fixture list. Eintracht have three away games in a row coming up and will fancy their chances at Nürnberg, Stuttgart and Limassol.

With nine points in the Europa League Frankfurt only need one more win to secure passage to the round of 32. Hence, a victory in two weeks away in Cyprus could seal the deal for the Eagles. Furthermore, knocked out of the cup already Frankfurt will have next week off and, as a result, Adi Hütter can spend some time with the squad on the training ground and heading towards the winter break Frankfurt will be in a comfortable position of putting more focus on the Bundesliga.

The Eagles are flying and sky is the limit this season if their upward trajectory continues.