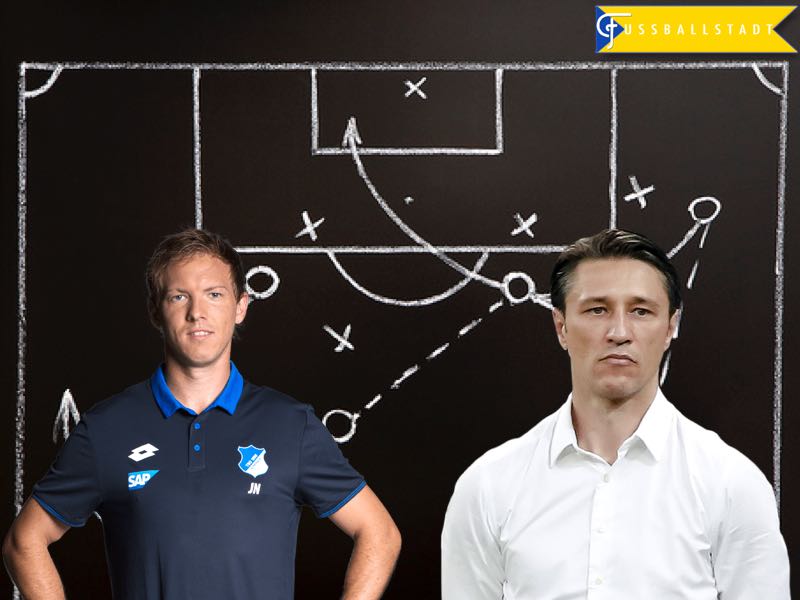 Eintracht vs Hoffenheim – The Tactical Battle

Eintracht vs Hoffenheim was the duel between two of the biggest surprise teams of the Bundesliga on matchday 14: fifth placed Eintracht Frankfurt was entertaining fourth placed 1899 Hoffenheim. The consensus before the match was that the game would be decided from the side-lines, as Eintracht’s head coach, Niko Kovac, and Hoffenheim’s head coach, Julian Nagelsmann, are considered two of the most talented coaches in the league.

From the get go, these statistics highlight the fundamental differences in the playing philosophy of the two coaches. While Kovac has a defence first mentality, Nagelsmann prefers his teams to play more offensive minded football.

Nagelsmann is known in Germany to come up with ever changing training plans that do not focus on teaching automatism, but rather on ever changing game forms. Nagelsmann believes that this form of practice encourages individuality and improvisation on game day, which allows players to make the right decisions even in high-pressure situations.

Nagelsmann’s preference for complex practices has meant that Hoffenheim have focused their recruitment on German speaking players with Bundesliga experience.

Kovac is known for his high pressure and tempo training regimes, which emphasize small spaces in order to simulate match day tempo. But the coach also believes in the transparent-professional, using specialists to determine practice intensity, which has reduced the number of injuries in the squad.

This latter element has been key, as Eintracht have one of the smallest budgets in the league, which allowed them mainly to sign non-German players from smaller leagues, or talents from bigger clubs on loan.

Tactically there are also some differences. Both coaches prefer to play with three men in the back, but Kovac’s system looks like a 5-4-1 defensively, which turns into a 3-4-3 system when Eintracht go on the attack with just one natural forward in Alex Meier, who on paper was supported on the wings by Haris Seferović, and Marco Fabián.

Hoffenheim, under Tuchel, line up in a 3-5-2 system, which turns into a 5-3-2 system when Hoffenheim defends. In this system, Nagelsmann uses two natural forwards in Sandro Wagner, and Andrej Kramarić. The two wingers, Jeremy Toljan, and Pavel Kadeřábek are supposed to act both as left-backs to support the defence, and also as attacking wingers to join the attack when Hoffenheim goes forward.

Eintracht vs Hoffenheim – The Line-ups

Eintracht vs Hoffenheim – First Half

What became quickly apparent was the fact that Frankfurt sought to aggressively push Hoffenheim’s defensive line. Both Seferović, and Fabián were especially important in this, as they attempted to disrupt Hoffenheim’s build up play. What was interesting in the early goings was the fact that Fabián would often drop deep behind Alex Meier into the more natural playmaker role, which meant that Meier had more room on the left side, with Seferović playing on the right wing.

Hoffenheim on the other hand tried to step up the tempo, and would often double up on the wings with Lukas Rupp combining with Toljan on the left, and Nadiem Amiri with Kadeřábek on the right. The wingers tried to stretch Frankfurt’s three-man defence trying to establish room for Wagner, and Kramarić in the centre of the box, where their physical presence made them the perfect target man for high crosses.

But it was Frankfurt, who had the better of the match in the opening 25 minutes of the game. Their high pressing game made it difficult for Hoffenheim to get out of their own half, which meant that despite the fact that Hoffenheim had the majority of the possession Frankfurt seemed the more likely to score.

Frankfurt could be found pressuring Hoffenheim already at kick-off making it difficult for Hoffenheim keeper Oliver Baumann to find targets for the outlet pass.

Hoffenheim responded to the high pressing game by establishing a physical presence in which Sandro Wagner in particular became the pantomime villain. Wagner would use his physical presence to win balls deep for Hoffenheim, and Wagner in particular became the first defender in many respects winning the ball deep to disturb Frankfurt’s transition game.

Towards the second half of the game Hoffenheim slowly took control of the match controlling possession, and also developing chances. At the same time Hoffenheim never opened up completely never allowing Frankfurt the space to develop their counter game, which is something that hurt Borussia Dortmund two weeks ago.

What Frankfurt could do if they were given the room was demonstrated just before halftime when Alex Meier, and Fabián in particular combined on several occasions to create goal-scoring chances.

HALFTIME
No goals after a very intense first half.#SGETSG 0-0 pic.twitter.com/YszvG1TGnl

Eintracht vs Hoffenheim – Second Half:

Frankfurt in particular stepped up their physical antics in an attempt to disrupt Hoffenheim’s possession game. Fabián and Seferović in particular were the main perpetrators in this challenging Hoffenheim’s backline frequently. Unfortunately the physical play also meant that Fabián would collect a yellow-card early in the second half.

Nagelsmann would react to his side’s inability to play out of the back, and overwhelm Frankfurt’s defence by bringing on Mark Uth for Kramarić in the second half. On the other side Kovac would bring on Ante Rebić from Seferović. On paper the two changes would make little differences to the tactical formation of either side.

Rebić, however, would generate more energy on the right wing than Seferović did. Furthermore, Frankfurt’s formation now appeared more like a 3-4-1-2 with Rebić playing more like a second striker, with Fabián dropping behind the front two.

With Rebić playing a more central role Timothy Chandler was given more room on the wing, and the American did well on several occasions to create chances for the attacking line.

Nagelsmann on the other side brought on the more offensive minded Steven Zuber for Kadeřábek to get Hoffenheim’s underwhelming right side to be more productive going forward. But the Swiss winger, who has been converted from a winger to a wing-back during the summer was unable to provide the necessary offensive punch for Hoffenheim going forward.

The game became more aggressive going into the final ten minutes with Chandler getting into an altercation with Wagner. The American was then sent off with a straight red card after laying a hand on Wagner’s neck—this has been the sixth red card for Frankfurt since Kovac has taken over as the head coach, which demonstrates the Croatian’s emphasize on aggressive football.

The altercation was in many ways a symbol for the second half of the game, as the match turned into a war of attrition. Some of that was down to the fact that Hoffenheim reacted to Frankfurt’s physical game with their own physicality rather than focusing on their ball possession game.

Even with the extra man Hoffenheim were incapable of breaking down Frankfurt, who kept pressing high, and therefore were able to contain Hoffenheim in their own half. In fact Hoffenheim had not one single effort on Frankfurt’s goal in the second half.

What has been built up to a match of the highest calibre was not able to live up to the billing. Some of this was due to the fact that both sides focused too much on trying to disrupt each others game with physical play.

Hoffenheim in particular fell into this trap, as they dominated possession with 57% but were not able to overcome Frankfurt’s midfield, let alone their defence. In fact for the first time since last April Hoffenheim played an entire half without a single shot on the oppositions net.

Frankfurt on the other hand felt more confident to give in to the physical play, as they committed 28 fouls, as opposed to Hoffenheim’s 17. Indeed the Eagles, especially after Ante Rebić was brought on, had the better chances, and should have perhaps won the game even after they went down to ten men after Timothy Chandler was sent off with a red card.