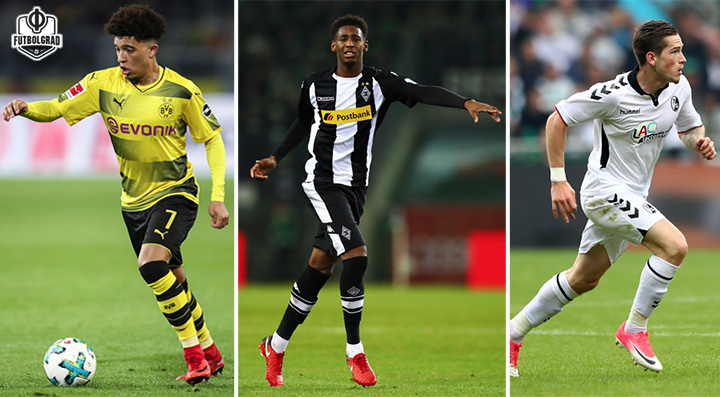 English talent – Under the Bundesliga microscope

Jadon Sancho is perhaps the latest – hottest – property in the Bundesliga. Snapped up from Manchester City in the summer for €8m he’s been thrust into the Borussia Dortmund starting eleven.

Why though , what did Peter Stöger see that Pep Guardiola didn’t? Take this observation out a little and wider and you can ask what did Dieter Hecking see in Reece Oxford that took West Ham months to observe? Then finally, what did RB Leipzig see in Oliver Burke that resulted in the Scot receiving a chance in one of Europe’s top five leagues when Premier League coaches were hesitant to take a chance on the Nottingham Forest prodigy?

The Bundesliga is well known for giving German talent the chance to shine, but now it seems it may have its eyes fixed on England. The Premier League is without doubt the best marketed league in the world, but with this global market lead comes hesitance. Coaches and managers are under such tremendous pressure to win that their appetite to develop has seemingly faded.

Even so far as Arsenal – once lauded for their development process – now have an eye on Pierre-Emerick Aubameyang to lead their line. A 29-year-old striker that could cost as much as €65m. What happened to the vast array of young talent Wenger brought in, was it simply a case of it was ‘too risky to develop it’ in the global glare of England’s title race?

Compare Arsenal’s pursuit of goals to that of RB Leipzig. The Saxony side have developed Timo Werner, so much so the striker is now being tipped to lead Germany’s line at the World Cup in Russia. At 21 years of age Werner has rifled his way into Joachim Löw’s squad with devastating effect. Would the young German had similar opportunities at Manchester United or Chelsea had he been English?

The statistics say probably not, a 2017 UEFA study revealed that more than two-thirds of Premier League players are born overseas, 69.2% – the highest proportion in Europe, and not just by a small margin, the difference is 12%.

The list of English, or English based youth players, who have found their chance in the Bundesliga is growing. Sancho is the latest of many – from Ryan Kent who swapped Liverpool for a loan spell at Freiburg, to Kaylen Hinds who swapped the merry-go-round of Arsenal based loans for a permanent move to VfL Wolfsburg.

There are though those that have gone the other way, Emre Can of Liverpool and Leroy Sané of Manchester City are two examples. However, moves this way are rare and crucially they were Premier League ready. Someone had already completed the painstaking task of bringing the player up to competitive standard. 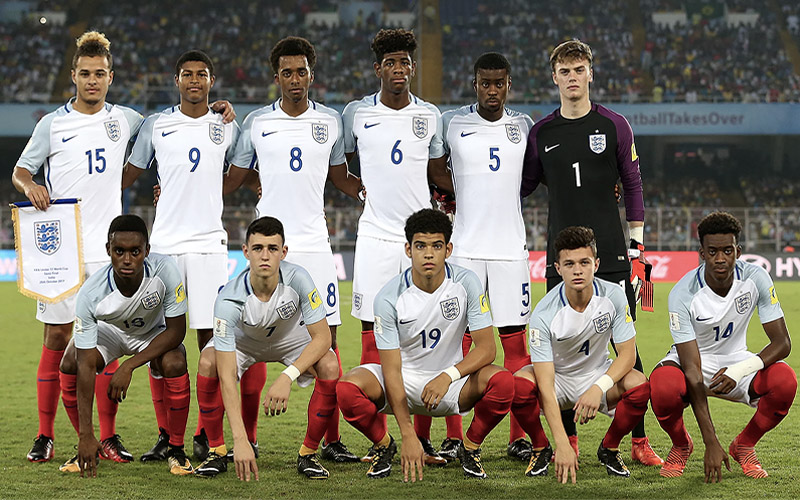 England’s U17 World Cup superstars before the Semi-Final versus Brazil. Photograph: Jan Kruger/FIFA via Getty Images

England has youth quality, it has bags of it. Recently crowned U17 World Champions after demolishing Spain in the final only Jadon Sancho from that squad has been given the chance at the highest level.  The Futbolgrad Network spoke to UEFA A Licence candidate and Youth Football expert Mark Thompson for an insight into how the English system works. Thompson cited the vast pressure on coaches and managers at the top level:

“The hiring and firing of managers in the Premier league is a problem for our successful England Youth sides. Managers are put under huge amounts of pressure to win, and stay in, the Premier League. It’s about financial loss and gain for owners and chairman” He went on to explain that “young players will make mistakes and learn from them – if given the opportunity to play at the top level”.

Until there is more stability in terms of managers jobs at the highest level, I can’t see things changing.

This has been the case in the past – Wayne Rooney, Steven Gerrard and Frank Lampard all received their chance at an early age. The latest English players to make an impact at a tender age have been from the academies of Southampton and Tottenham Hotspur, both clubs have an incredible development line of turning potential to proven.

Maybe the success of European clubs to develop talent comes from their lack of television billions. Premier League clubs have the ability to spend vast amounts of money on ready made talent, a far quicker option – especially when their managers are under the microscope to deliver.

“Potential is a word used a lot, and for some reason other leagues around Europe are better, and more willing to give that potential opportunities” Thompson added.

Ryan Kent and Reece Oxford were both recalled to their parent clubs over the January transfer window. Kent was immediately loaned out to Bristol City, playing in the recent Carabao Cup semi-final second leg where the Robbins gave Manchester City a real test. Meanwhile Reece Oxford is being linked with a return to Gladbach, either on loan or as part of a €20m permanent move.

Whatever happens in the short term there is no doubt that the Bundesliga now has a firm interest in English youth. What waits to be seen is if more of the fantastically talented U17 world cup squad have to make their way abroad to be given the opportunity to show what they achieved in India can be a weekly occurrence.

Meanwhile, Matchday 20 in the Bundesliga will once again give Sancho the opportunity to show what he can do, as Dortmund host Freiburg on Saturday afternoon.