FC Bayern Decoded – A Guide on how to beat the Bavarians

One of the big topics on the weekly Futbolgrad Podcast this Monday was whether FC Rostov could surprise FC Bayern München on matchday 5. Both Andrew Flint, and I, expressed optimism that Rostov could indeed gain something from the tie, or at the very least keep up with Germany’s record champion.

Bayern München had gone into the game against Rostov. Bayern had been winless in two games, as they tied TSG 1899 Hoffenheim 1-1 on matchday 10 of the Bundesliga, and then lost 1-0 in der Klassiker against Borussia Dortmund on matchday 11. The two results meant that Bayern had lost top spot in the Bundesliga to newly promoted RB Leipzig.

In truth, Bayern has been struggling for a while this season, as they dropped points in a 1-1 draw to 1. FC Köln on matchday 6, and a 2-2 draw to Eintracht Frankfurt on matchday 7. Bayern picked up six points in the two Champions League matches against PSV Eindhoven (4-1 at home, and 1-2 in Eindhoven), despite the fact that there were spells in both those games that looked less than impressive.

Despite the obvious vulnerabilities, Eindhoven failed to decode Bayern’s weaknesses. The big reason for that was in the tactical formation picked by Eindhoven coach Phillip Cocu, as he twice elected to choose the traditional 4-3-3 formation. Carlo Ancelotti also favours this formation, and Bayern seems to do well against sides that elect to play in that formation.

Frankfurt, Köln, Hoffenheim and Borussia Dortmund, however, elected to go with a flexible 3-5-2 formation, which switches to a 5-3-2 formation when defending. When discussing Rostov’s upcoming fixture against Bayern, I pointed out in our Podcast that, like Dortmund on matchday 11 of the Bundesliga, Rostov prefers to play 3-5-2 in the Russian Football Premier League.

Here is a quick glance at the Hoffenheim and Borussia Dortmund games:

The 29-year-old Hoffenheim coach Julian Nagelsmann, who is widely considered to be one of the brightest coaching talents in Europe, elected to go with three defenders in the back. Benjamin Hübner, Kevin Vogt, and Niklas Süle were, however, supported by Steven Zuber (on the left), and Pavel Kadeřábek (on the right) when Bayern went on the attack, turning the formation into a 5-3-2.

When going forward, the two wing-backs would quickly switch to take over offensive duties. The Germans call this Umschaltspiel, or transition game, which describes the quick switch from defence to going on the attack. Having five in the back when defending, made it extremely difficult for Bayern wingers Arjen Robben, and Douglas Costa to find room on the wings.

The two forwards, Andrej Kramarić, and Sandro Wagner, often had to stay back, and quickly move forward to overrun the Bayern defence, which had to move up high to press Hoffenheim’s deep-lying defence. Another aspect was that Hoffenheim outrun their opponents by almost ten kilometres (Bayern run 115.6km, Hoffenheim 123.2km), and that they played physical leaving Bayern with very little room to develop their play. 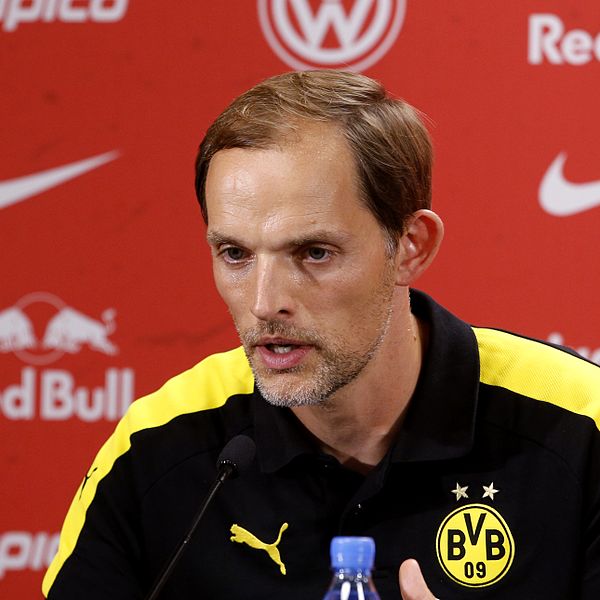 Glimpses of this could also be observed when Dortmund faced Bayern on matchday 11 of the Bundesliga. Borussia head coach, Thomas Tuchel, surprised the audience when he elected to go with three defenders in the back, and two strikers—Pierre-Emerick Aubameyang, and Adrian Ramos—up front.

As with Hoffenheim, the two wing backs, Łukasz Piszczek on the left and Marcel Schmelzer on the right, turned from defensive backs to offensive backs depending on whether Dortmund were on the back foot, or front foot. But another interesting aspect was the fact that both Pierre-Emerick Aubameyang and Adrián Ramos often switched positions with the two attacking midfielders Mario Götze, and André Schürrle to go wide, which frequently stretched Bayern’s defence.

Borussia Dortmund’s winning goal was a perfect example of the above, as Götze won the ball out wide forcing Mats Hummels out wide, leaving room in the centre for Aubameyang to score the only goal of the evening. Shortly after, however, Schürrle could have doubled the score as, this time, Aubameyang went out wide, which gave Schürrle the space in the centre, and his finish was almost stopped by Bayern keeper Manuel Neuer.

In fact, Rostov have mastered the Umschaltspiel from a defensive 5-3-2 formation in which the two defensive backs turn into wingers when going forward in the Russian Football Premier League. Rostov, in fact, have used this formation on a regular basis to overcome sides in Russia which, on paper, possess far more talent.

On paper, Bayern München should have easily defeated Rostov, but at the end of the night, the Russians had achieved a minor miracle by defeating Bayern 3-2 at the Olimp-2 (read the match report here), which means that the Bavarians have been without a victory for three matches in a row. 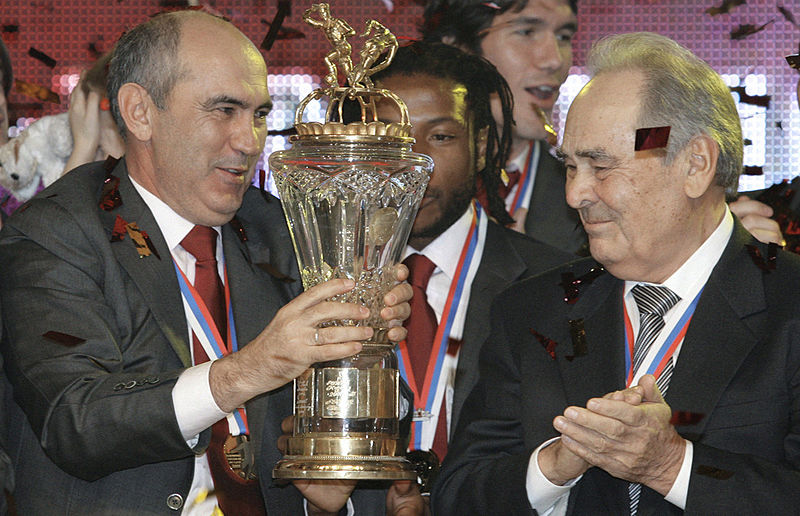 Kurban Berdyev tactical genius has been fundamental for his success as a coach – Image by RIA Novosti archive, image #519269 / Maksim Bogodvid / CC-BY-SA 3.0

On matchday 1 Bayern had already struggled with Rostov’s system and, only after scoring the first goal, did the floodgates open with the Bavarians winning the match 5-0. Something similar seemed in the cards on Wednesday night in Rostov, as Bayern took 35 minutes to decipher Rostov’s defence when Douglas Costa opened the scoring. But, this time, Rostov managed to keep the floodgates closed by staying disciplined, and trying to hit a high pressing attacking line with counter attacks.

This strategy worked well when Rostov managed to counter a Bayern attack with Dmitry Poloz and Sardar Azmoun combining well to equalize the score in the 44th minute. Then, in the second half, Rostov took the lead after a soft challenge from Jérôme Boateng led to a penalty that was converted by Poloz.

Bayern equalized the score shortly after through a close range effort by Juan Bernat, and continued to press. But what was obvious was the fact that Bayern struggled with Rostov’s disciplined line-up—the Russians remained patient and continued to hit the visitors from the Bavarian capital on the counter attack.

One of those counter attacks then paid off when Azmoun was fouled by Bayern’s midfielder, Thiago, just outside the penalty box. Christian Noboa scored on the ensuing free-kick giving Rostov the vital lead. Bayern continued to press, but were unable to find a way through Rostov’s disciplined backline.

In the aftermath of the game I received several comments from Futbolgrad Podcast (seriously go listen to it here) listeners about the fact that Andrew and I seemed to have gotten it right when we suggested the end of Bayern’s dominance. In truth, however, it is far to early to say whether this is really, to some extent, the end of Bayern’s dominance over German, and European football.

There are some indicators that suggest, however, that an end of Bayern’s dominance could be temporary. A major factor is age, as Philipp Lahm, Arjen Robben, and Frank Ribéry are all in their twilights of their respective careers. Young stars such as the wingers Douglas Costa, Kingsley Koman, the midfielder Renato Sanches, and the multi-faceted Joshua Kimmich have demonstrated that they can become world-class players in the future, but are not yet capable of filling the void on a regular basis.

Then there is the fact that the Bundesliga is home to some of the most innovative coaches in European football with the likes of Thomas Tuchel, Julian Nagelsmann (Hoffenheim), Peter Stöger (Köln), and Ralph Hasenhüttl (RB Leipzig), to just name a few, demonstrating that they can come up with tactical solutions that are able to hurt a club like Bayern. To a great extent this has been a factor because new head coach, Carlo Ancelotti, still seems to struggle a bit with finding a proper system for Bayern.

Finally, success is always cyclical in football. Bayern have now dominated for the last four years and, as players on the squad get older, and their opponents find new tactical solutions, Bayern could very well look at a season in which they are on the receiving end of defeat on a more frequent basis—especially if opposing coaches decipher Bayern’s games against Hoffenheim, Dortmund, and Rostov.