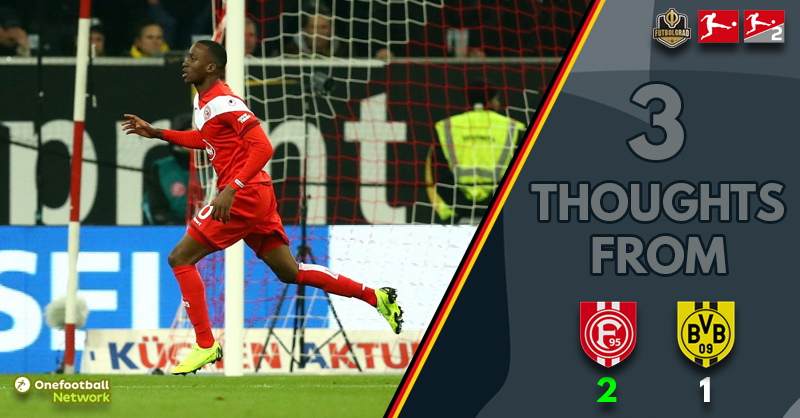 ‘Lukebakio a rising star’ and ‘is the title race back on?’ – Three Thoughts from Fortuna vs Dortmund

Top against relegation threatened – there shouldn’t have been a sting in the tail. The Bundesliga proved once again it can always throw up a surprise as Fortuna vs Dortmund became an uncomfortable night for the newly crowned Herbstmeister. 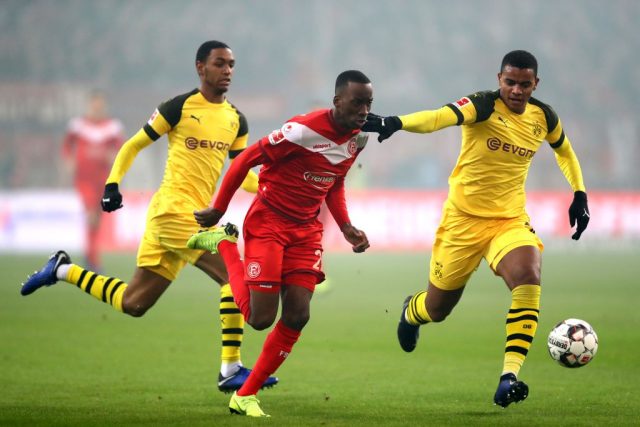 Dodi Lukebakio impressed in the red of Fortuna once again as the hosts claimed an unlikely victory during Fortuna vs Dortmund. (Photo by Dean Mouhtaropoulos/Bongarts/Getty Images)

From potential to proven, the Belgian has announced himself on the two biggest stages in Germany this season – against Bayern München and Dortmund.

His hat-trick in the Allianz Arena (to peg back Bayern in their own backyard) brought the 21-year-old striker to prominence – he has once again displayed his qualities, this time against the newly crowned ‘Autumn Champions’.

His opening goal was exceptionally well taken, pouncing on a fast break the Watford loanee drove at speed towards an isolated Roman Bürki. Displaying the composure to lift the ball over the Dortmund ‘keeper and into the net, Lukebakio showed his eye for goal as a natural finisher yet again.

The only problem for Fortuna now is how do they plan for life without him? The form shown by the forward will either result in a return to the Premier League in the summer, or it will begin the start of an auction, for which die Flingeraner will be unable to join.

The Fortuna head coach has taken four points from a possible six against the Bundesliga’s ‘big two’. A remarkable statistic considering they have been languishing at the wrong end of the table.

After a less than convincing start, a four-one win against Hertha Berlin on matchday 11 started a change in their fortunes. A thrilling draw with Bayern was followed by two defeats, but the side from the Merkur Spiel-Arena can now boast back-to-back victories with this win against Dortmund.

The 65-year-old coach managed to nullify the Dortmund threat thanks to some serious hard work, instilling the discipline in his side to keep their shape and not allow the league leaders the room they have been accustomed to of late.

This result pulls Fortuna out of the bottom three for the first time since September.Their next game against Hannover 96 (who sit bottom of the table) will give them a chance to put daylight between themselves and the danger zone – where the dreaded relegation ghost haunts.

Fortuna vs Dortmund : Title race back on?

Marco Reus spoke candidly after Fortuna vs Dortmund, remarking that his side must give everything in their next game. (Photo by Maja Hitij/Bongarts/Getty Images)

Dortmund’s slip up against Fortuna has allowed their lead at the top of the table to be cut to six points – how the Schwarzgelben respond is the biggest question now.

In a true football fate scenario, their next match comes against second placed Gladbach – defeat at the hands of their fellow Borussians will see their lead cut to a mere three points as the Bundesliga breaks for its winterpause.

With Dortmund supposedly in a transitional season – under a new head coach, learning a new system of play, with numerous new signings to bed-in, there was always going to be a point in which a stumble came.

Their reaction will give an insight into their ability to fight for the title come the New Year. It is clear that club captain Marco Reus is up for the task – speaking pitch side after the game he said:

“We didn’t invest enough up front, we always said that we wouldn’t march through this league undefeated. We have to be more hungry to win games like this, we have one game left and we have to give everything in the last game” – Marco Reus, Borussia Dortmund.

Reus and co have the opportunity to show their worth this coming Friday, when it expected that a more familiar line-up will be restored – including Jadon Sancho and Paco Alcácer.

When the pair were introduced on the hour mark Dortmund looked a livelier threat, and the players soon combined to snatch a goal that gave the yellow and blacks late hope.