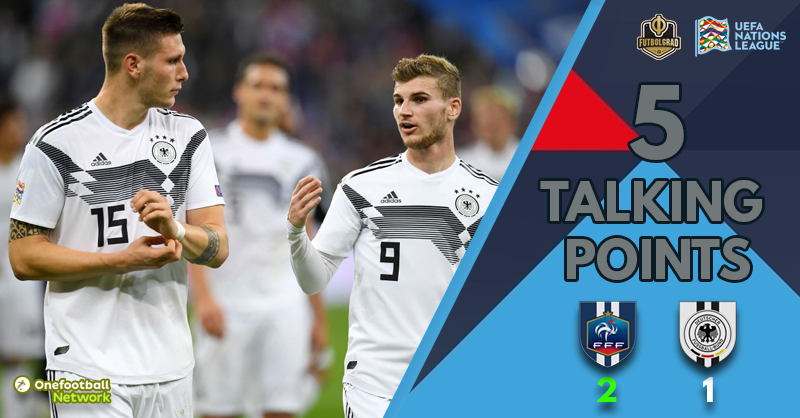 ‘Löw rings the changes’ and ‘what now for the old guard?’ – 5 Talking Points as Germany fall short in France

France vs Germany eventually ended in defeat for the visitors after they took the lead. Antoine Griezmann was on target twice to condemn Germany to their first consecutive competitive loss for 18 years. However, there were a number of positives to take away from Paris despite the scoreline. 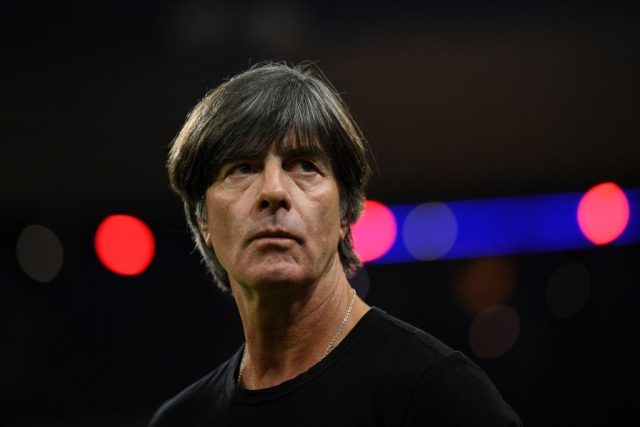 Joachim Löw made five changes for France vs Germany as he looked for a response from a dismal display in Amsterdam. (Photo: Matthias Hangst/Bongarts/Getty Images)

After an abysmal display in Amsterdam against the Dutch, Joachim Löw had to make changes. His insistence to overlook certain players, in favour of those he knew better, had left the head coach on thin ice – criticised heavily in both Germany and across the footballing spectrum.

It was no surprise to see five changes to the starting line-up, especially to the attacking quarter. However, he was also forced into changes at the back – and for an hour Germany looked a different animal.

Those who came in, gave the 2014 world champions a shape and balance that had been missing for vast parts of the last calendar year. For the first 45 minutes they made the current holders look ordinary as France struggled to cope with the German system.

Even in defeat, there are a number of positives to take away from this fixture – but, this sixth loss of 2018 now leaves Germany with the potential embarrassment of being relegated from the Group A standings of the UEFA Nations League.

As the game got underway you would have been forgiven for asking just who the current world champions were. The French couldn’t handle the speed in which Germany broke, and as the first half ended it should really have been a higher total for the visitors than just the one goal.

As well as tinkering with his line-up, Löw also changed the shape of the national side. Nico Schulz and Thilo Kehrer were given the licence to push up and attack, thus giving Germany an attacking five on the break. It worked to excellent effect early on, and the wing backs – coupled with Leroy Sané and Serge Gnabry – gave their opposite numbers all kinds of problems.

It wasn’t until half time that the French were able to regroup, and changes of his own eventually gave Didier Deschamps the chance to stabilise his side. After the break the class of Les Bleus started to show, but in truth the German’s should have had a three goal lead from their early dominance. 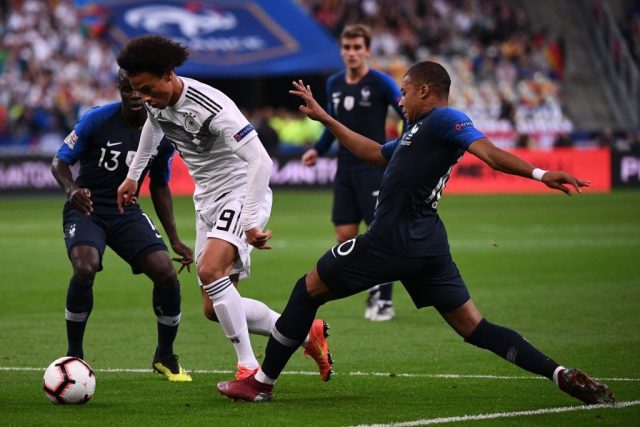 Leroy Sane injected some much needed pace and provided a threat throughout the France vs Germany match in Paris. (Photo: FRANCK FIFE / AFP)

For the previous few fixtures, and in Amsterdam specifically, the German attack looked laboured and ineffective. It was a chance for the Bundestrainer to try something new, and to his credit Löw did just that.

In came Sane and Gnabry to back up Timo Werner, often isolated of late. The changes worked from the kick-off, the speed of both Sane and Gnabry gave the French back line a genuine threat each time either one got the ball.

Had Sane been able to pick out Werner to greater effect the score could have been two on 20 minutes – the Manchester City winger fluffed his lines on what should have been an easy square ball, his first touch to set up the opportunity was exquisite however.

Despite the eventual defeat, the opening 45 minutes gave an indication that the German front line could be in good hands when led by the trio of young, talented and quick forwards.

With Jérôme Boateng ruled out through injury, the German defence had to be changed. Many would argue that on recent showing a change was needed – injury to a member of the back line or not.

In came Thilo Kehrer, Niklas Süle and Nico Schulz to give Germany a back three, as well as the option of a five man defence with two attacking wing backs. Mats Hummels retained his centre back position – both him, and a mixture of Süle and Matthias Ginter, were able to keep Olivier Giroud in check for the majority of the game.

Those who came in performed admirably for the most part, Antoine Griezmann has enough quality to give any defence a headache, and that’s precisely what he did on the hour mark – stepping out of the shadow he had found himself in for two thirds of the game.

France vs Germany : What now for the old guard? 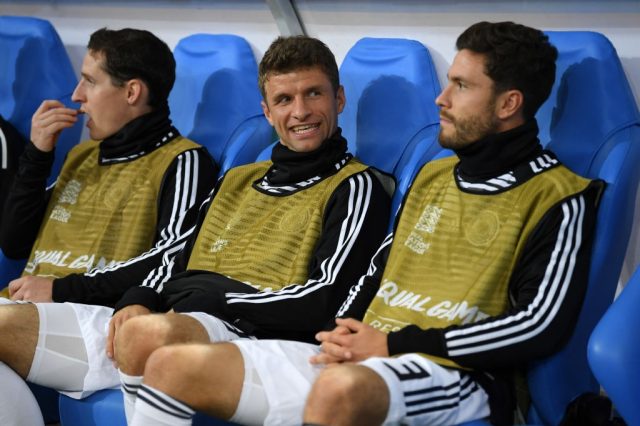 Is it almost time-up for some of Germany’s elder statesman? Thomas Müller and Jonas Hector only made the bench for France vs Germany.  (Photo: Matthias Hangst/Bongarts/Getty Images)

Schulz’s performance should have given Löw enough evidence to chose him over an ageing Jonas Hector. While the  FC Köln captain is only 28, his recent performances have shown the left back to be short on pace – something also highlighted this evening as a problem Matts Hummles is facing.

With both Sane and Gnabry impressing – and Werner leading the line – there was no room for Julian Brandt, who has been excellent for Leverkusen of late. This pushed Thomas Müller further down the pecking order – although the Bayern forward did get a late cameo, the performance of those trusted to lead the attack showed that his future could,and possibly should, be in question.

There is no doubt that despite the defeat, the future of the German national side is to look forwards and not backwards. The strength in depth that  Löw has – especially with regards to youth talent – should force the 58-year-old to build towards EURO 2020 and Qatar 2022 with players who have the legs for both competitions.