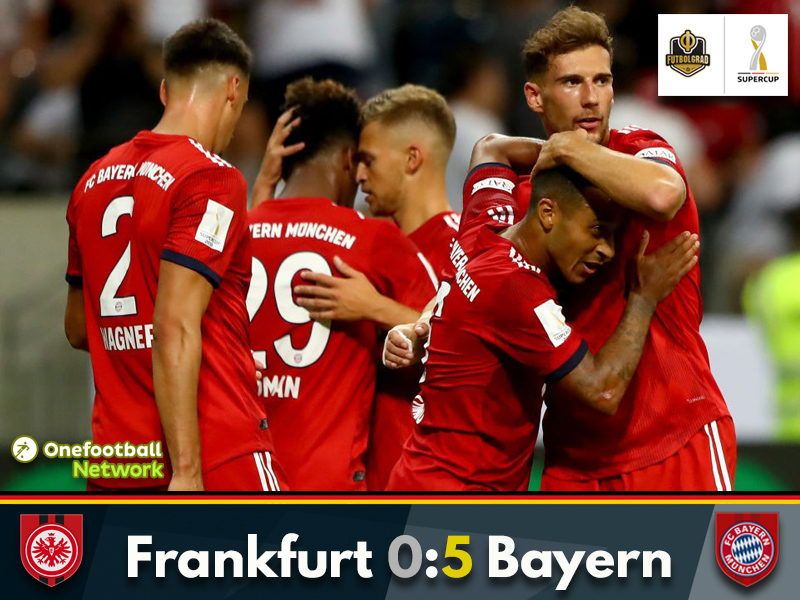 It was an energetic start to the match with Frankfurt, in particular, approaching this game aggressively. Die Adler played a high attacking line trying to dissect Bayern’s defence, which had a sluggish start to the game, by pumping balls into the box from both wings trying to stretch the defensive line of the Bavarians.

Bayern, however, are a deadly side that do not need many chances. Joshua Kimmich received the ball in the half-field, played a 30-yard cross that found Robert Lewandowski in the six-yard box and the Polish forward made no mistake to score with a close-range header.

Lewandowski was not done there, however. In the 25th minute, the Polish forward exchanged words with David Abraham in what resulted in an altercation in Frankfurt’s area just before a corner-kick. Receiving a minor slap in the face by Eintracht’s Marco Fabian the striker responded by nodding home the corner, making the most of the confusion created in Frankfurt’s defence.

Two quick goals put Bayern in quick control of the match and although Frankfurt were able to stem the flow of goals quickly, die Adler struggled to fail to get back into the match in the first half. At the same time, the Bavarians were lucky to finish the first half with 11 players. Defender Mats Hummels had brought down Mijat Gačinović with a sliding tackle just outside the penalty box – the Frankfurt forward would have been through, but Hummels received just a yellow card.

Bayern attempted to go straight for the jugular at the start of the second half, and Arjen Robben almost had a third in the 48′. The Dutch forward received a ball outside the box, and his curled effort from 20-yards drew a fantastic save by Frankfurt’s Frederik Rönnow.

Lewandowski, in the meantime, would not be denied and completed his hattrick in the 54′ minute. The Polish striker escaped Abraham at the edge of the box and then beat Rönnow, who got a piece of the shot, with a low drive from 11-yards out.

It was game, set and done for Frankfurt. But Bayern were not done with inflicting pain on die Adler scoring a fourth in the 64′. This time David Alaba was given to much space on the left flank, and then Rönnow failed to intercept his low cross, which ended up finding Kingsley Coman on the far post where the Frenchman just had to tap the ball over the line.

Perhaps the only negative for Bayern came in the 78′ minute. Alaba collided knee to knee with a Frankfurt defender and had to be helped off the pitch with a knee injury. Bayern then had to complete the match with ten players.

The Bavarians then added insult to injury when Thiago scored fifth in the 86′. Once again Coman was the architect – the French winger danced past a Frankfurt defender right off the byline on the left of Rönnow’s goal and then played a sharp central pass to Thiago, who made no mistake tapping the ball home.

Just before the end of the game, Sandro Wagner should have had a sixth. But the striker failed to tap home the ball from close range after another Coman cross. Overall, it was a dominant performance by Bayern that will leave a Frankfurt side behind that will now have some work to do before the season kicks off in less than two weeks.

Robert Lewandowski was the man of the match. The Bayern striker answered his critiques following a poor World Cup performance, which was surrounded by constant transfer rumours, by scoring three goals. His performance, in fact, highlights that despite Bayern denying a transfer away from the club the Polish striker will remain professional and continue his job for the Bavarians.

Refereeing was a big talking point throughout the match. Just before halftime, Marco Fritz should have sent off Hummels for bringing down Gačinović right outside the penalty box. The Frankfurt striker would have been through and was denied an obvious goalscoring chance. Fritz, however, just showed a yellow card to the Bayern defender. Meanwhile, Frankfurt defender Abraham should have been sent off for an elbow to Lewandowski’s face in the 72′ minute.